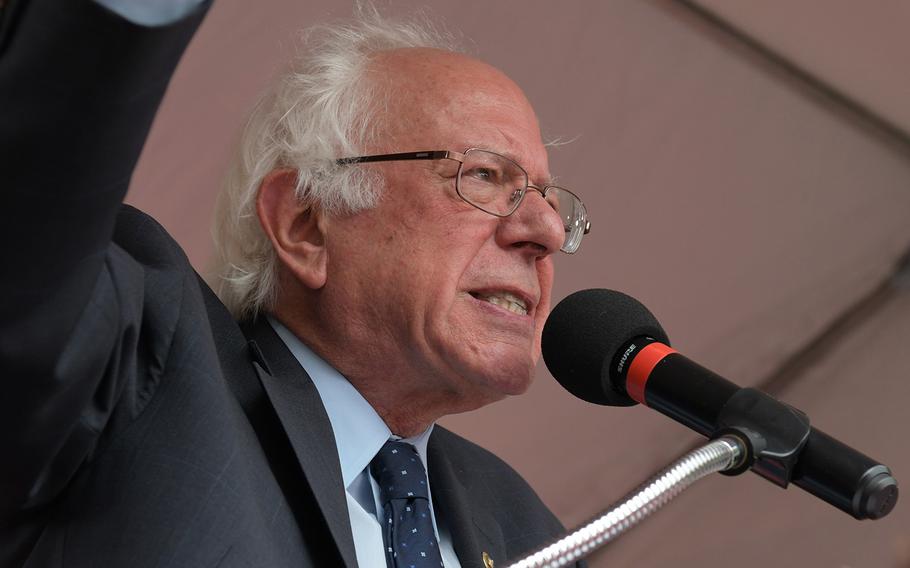 Buy Photo
Sen. Bernie Sanders, shown here at a rally to support the American Federation of Government Employees in 2018 in Washington, D.C., is squaring off against Sen. Joe Manchin on President Joe Biden's economic plan. (Stars and Stripes)

WASHINGTON — A political rift among Democrats over President Joe Biden’s economic agenda appeared to widen Sunday, after Sen. Joe Manchin, D-W.Va., threatened to vote against a tax-and-spending bill as large as $3.5 trillion.

Manchin instead called on Democrats to whittle down the amount, perhaps by more than half, while reeling in broad swaths of their still-forming proposal — including some of its programs to address child poverty and combat climate change. The potential for spending cuts later troubled Sen. Bernie Sanders, (I-Vt.), who described a smaller economic package as “unacceptable.”

The twin interviews on Sunday news programs foreshadowed a significant political stalemate, as Democrats continue laboring to craft a proposal that might overhaul federal health care, education, immigration and tax laws. The process has played out across the Capitol in grueling legislative sessions that have at times pit moderates against liberals over the final package’s price tag and policy scope. House Speaker Nancy Pelosi (D-Calif.) aims to have the proposal fully written by Sept. 15.

In sorting out the disputes, Democrats face a tough political reality: They must stay united in a Congress that they only narrowly control if they hope to pass what could become the largest economic package in U.S. history. The risks are especially high in the Senate, where Democrats have only a tiebreaking majority, making Manchin’s early opposition to their plans all the more potent.

Appearing on CNN’s “State of the Union,” Manchin reiterated his broader concerns that a tax-and-spending measure as large as $3.5 trillion could add to the deficit and worsen the country’s troubles with inflation. Echoing an op-ed earlier this month, he called on Democrats to pause their legislative work.

Party leaders have rejected those calls, with Senate Majority Leader Charles Schumer, D-N.Y., saying last week the chamber is moving “full speed ahead” in the hopes of adopting the final measure before the end of the month. Asked about the leader’s timeline, Manchin fired back, telling CNN “That’s fine, he can, he will not have my vote on [$3.5 trillion] and Chuck knows that.”

Manchin on Sunday also revealed some of his thinking about the package, raising new concerns with some of Democrats’ biggest priorities.

He trained his fire on the party’s efforts to extend the expanded child tax credit, for example, a program that Democrats boosted under the most recent economic stimulus. Manchin raised the need for additional rules in the program that limits the tax credits to those with lower incomes and raised the possibility Democrats should tie the aid to work requirements — an idea generally opposed by liberal members of the party.

“I support child tax credits,” he began. “Let’s see how we’re doing, let’s make sure we’re getting it to the right people.”

On climate, meanwhile, Manchin also appeared to take fresh aim at one of Democrats’ prized plans to reducing emissions — a program that would pay energy providers to use cleaner sources while penalizing those that continue to pollute. Some party lawmakers say the program is essential for reaching Biden’s goal to slash the emission of greenhouse gases in half by 2030, yet Manchin, whose state relies heavily on the coal industry, appeared to describe the effort as unnecessary.

Manchin’s early calls to scale back the package drew condemnations from Sanders in a later interview on CNN.

“No, it is absolutely not acceptable to me, I don’t think it’s acceptable to the president, to the American people, or to the overwhelming majority of the Democratic caucus,” Sanders said. “I believe we’re going to all sit down and work together and come up with a $3.5 trillion reconciliation bill, which deals with the enormously unmet needs of working families.”

Sanders touted the broader aims of the package to lower prescription drug prices, expand Medicare benefits and combat challenges including climate change. He stressed that many Democrats had already compromised in setting a $3.5 trillion ceiling, after Sanders and his allies initially sought close to $6 trillion.

And Sanders highlighted the political stakes, pointing to the fact Democrats have tied their tax-and-spending measure to a separate, roughly $1 trillion effort to improve the nation’s infrastructure. Liberal lawmakers have said they will not back that measure unless they can vote on a robust economic package.

“It would be a really sad state of affairs for the American people, the Congress, if both of those bills went down,” he said.