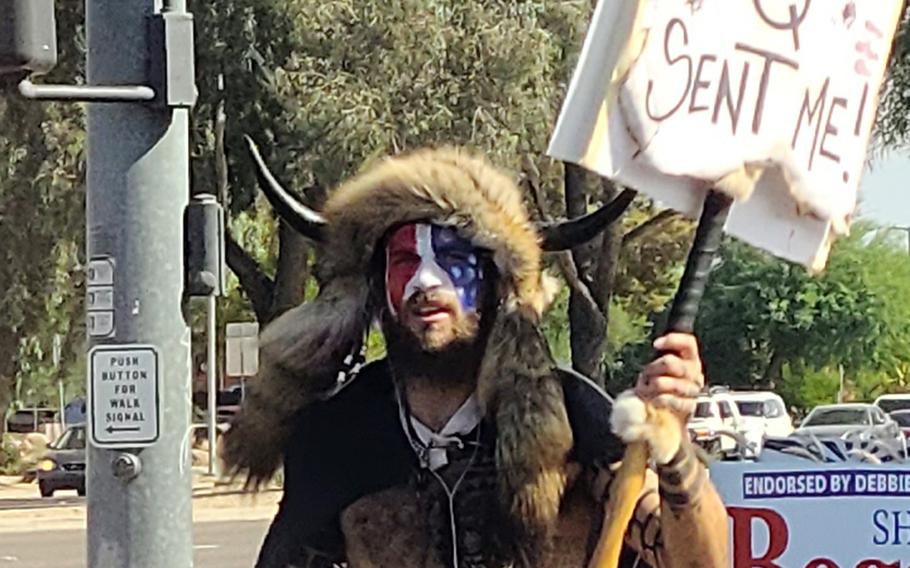 WASHINGTON — The bare-chested man photographed on Jan. 6 standing on the Senate dais in horns, fur-lined headdress and red-white-and-blue face paint pleaded guilty Friday to felony obstruction of Congress in the Capitol riot, potentially facing at least three years in prison.

Known as the “QAnon Shaman,” Jacob Anthony Chansley became one of the most visible participants in the storming of the U.S. Capitol. He was captured in news coverage worldwide chanting, praying and shouting expletives about Mike Pence being a “traitor” while holding a flag-draped spear at the vice president’s presiding desk in the Senate chamber.

“It’s Only A Matter of Time. Justice Is Coming!” Chansley, 34, admitted writing on a note left at the desk.

On Friday, Chansley in a deal with prosecutors pleaded guilty to one of six charged counts: corruptly obstructing, influencing, or impeding an official proceeding, a joint session of Congress meeting to certify the 2020 presidential election.

Chansley also served in the Navy as a supply clerk from September 2005 to October 2007, leaving the service as a seaman apprentice, according to his personnel record.

“That is really what happened? . . . And you are in fact guilty?” U.S. District Judge Royce Lamberth asked at a plea hearing in federal court in Washington.

“Yes, your honor,” said Chansley, who appeared by video-teleconference from a low-security federal prison complex in Littleton, Colo., where he was taken in July for psychiatric evaluation.

Chansley is one of a little more than 50 people who have pleaded guilty among 600 charged so far in the Capitol breach, which authorities said contributed to five deaths, assaults against 139 police officers and, later, suicides among law enforcement who responded.

The FBI has reported that more than 20 self-identified QAnon adherents were arrested in the riot, and one, Air Force veteran Ashli Babbitt, was fatally shot by police while breaching a barricaded House Speaker’s Lobby door. QAnon’s unidentified online “prophet” had promised in thousands of cryptic postsbased on discredited claims that former President Donald Trump was leading a spiritual war against a cabal of Satan-worshipping “global elites” and “deep state” international child-sex traffickers who control the world, a struggle to culminate in a mass roundup of enemies.

In costume and using the name Jacob Angeli, Chansley was repeatedly photographed and interviewed in 2020 at pro-Trump rallies, often carrying a sign that read, “Q sent me.”

“When you really do enough research, it all ties together,” he told the Arizona Republic about QAnon.

In social media posts before the riot, Chansley advocated “identifying and then hanging those he believes to be traitors within the United States government,” according to court documents. FBI agents say that in interviews with them, Chansley said he had plans to go to the Arizona Capitol and might engage in similar acts in the future.

In plea papers, Chansley admitted being among one of the first 30 rioters inside the U.S. Capitol building, entering through a broken door on the first floor of the Senate side at about 2:14 p.m. after others smashed through adjacent windows.

The invasion triggered the evacuation of House and Senate members, as well as Pence, who had refused Trump’s pleas to block the vote certification. At 2:16 p.m., Chansley admitted, he challenged police through a bullhorn, demanding that lawmakers be brought out.

Chansley ignored police orders to leave the building, making his way instead to the Senate gallery and floor, which he occupied from 2:52 p.m. to 3:09 p.m., he acknowledged.

Men - some wearing helmets, camouflage gear, waving Trump flags and carrying zip ties - dropped to the floor, rifled through desks, stole papers and described an “information operation” against the government.

As recorded on video by a New Yorker reporter, a police officer urged the men to step away from “the sacredest place” in the Capitol. Chansley replied he was going to sit in the vice president’s chair because Pence was a traitor, handing his phone to another participant to have his photo taken before beginning a shouted group prayer.

In plea papers, Chansley admitted to giving thanks for the opportunity “to allow us to send a message to all the tyrants, the communists, and the globalists, that this is our nation, not theirs, that we will not allow America, the American way of the United States of America to go down.”

Attorney Albert Watkins acknowledged his client “is iconically and forever linked as the face of January sixth,” but said he suffered from mental illness. A U.S. Navy veteran who served as a supply clerk seaman apprentice from 2005 to 2007, Chansley was kicked out for refusing an anthrax vaccine, military records show.

Military medical records supported the findings of a recent court-ordered evaluation conducted by the U.S. Bureau of Prisons, which showed that while the defendant is mentally competent, he suffers from personality disorders exacerbated by pandemic lockdowns over the eight months he has been jailed pending trial, Watkins said.

“The defendant was not a planner. He was not an organizer,” Watkins said, asking the judge to release Chansley pending sentencing.

Doing so would promote the “humanity” and “integrity” of proceedings and get Chansley more medical care, Watkins said.

In a statement, Chansley’s attorney also said he “has repudiated the ‘Q’ previously assigned to him” and requested to no longer be identified with the letter.

The judge took the request under advisement, after opposition by prosecutors and said he would rule promptly.

Chansley was arrested Jan. 9 in Arizona and charged by a six-count indictment with felony counts of rioting and obstructing an official proceeding of Congress, punishable by up to 20 years in prison, as well as misdemeanor counts including trespassing and disorderly conduct.

Chansley made headlines after his arrest when he asked to be fed only organic foods, citing religious beliefs, and he begged to be released after Watkins said he lost 20 pounds in jail.

He also gave an unapproved interview from jail with “60 Minutes+” in May, describing his actions as peaceful and well-intentioned, remarks Lamberth wrote showed “a detachment from reality.”