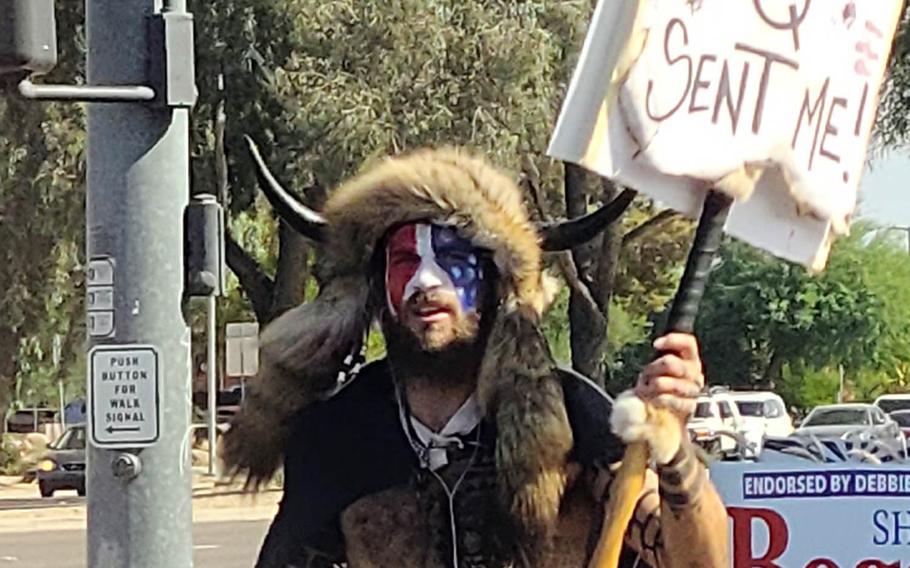 The man described as the “QAnon Shaman,” who became the face last week of the Capitol riots in Washington after being photographed shirtless, sporting a horned headdress and painted face, is a Navy veteran who worked as a supply clerk, according to reports.

Jacob Anthony Chansley, 33, also known as Jake Angeli, of Arizona, was arrested Saturday by federal authorities on charges of illegally entering a restricted building and violent entry and disorderly conduct on the Capitol grounds, according to the U.S. Justice Department.

Chansley and thousands of other supporters of President Donald Trump shocked the nation Wednesday when they marched from a Trump rally to the Capitol, battled police and forced their way inside as Congress met to certify Joe Biden’s election as president.

Two people died during the takeover. Three other people died afterward due to “medical emergencies,” according to the Washington Post on Monday.

Chansley’s mother, Martha Chansley, on Thursday told Arizona’s ABC15 that her son had served in the Navy.

“He’s probably one of the gentlest people I know,” she said. “He’s trying to get people to hear the message. Wake up. Wake up. Don’t we still live in the United States of America?”

QAnon is broad, groundless conspiracy theory that says Trump is waging a secret war against elite Satan-worshipping pedophiles in government, business and the media, according to news reports. Adherents believe a day of reckoning will come when Trump has these prominent people, like former Secretary of State Hillary Clinton, arrested and executed. There are many spin-offs and diversions from this theory.

Chansley served in the Navy as a supply clerk from September 2005 to October 2007, leaving the service as a seaman apprentice, Military.com reported Monday, citing a copy of his personnel record.

Chansley trained in Illinois and Mississippi before being assigned to the supercarrier USS Kitty Hawk in 2006, the report said. He was assigned to the Transient Personnel Unit in Puget Sound, Wash., when he left the service.

Officials with the Navy’s Chief of Information office could not be reached for comment by Stars and Stripes after hours Tuesday.

Chansley defended his actions Thursday in an interview with ABC15 reporting partner, Newsy.

“I'm not really all that worried about it because, in all honesty … I didn't break any laws. I walked through open doors,” Chansley said. “I obey the orders of the president of the United States.”

Chansley made an initial telephonic appearance in federal court in Phoenix on Monday, ABC15 reported. His mother told the news outlet that her son hadn’t eaten since he was taken into custody because he gets sick if he eats anything other than organic foods.

Chansley is one of several veterans identified thus far as having either attended rallies last week in the nation’s capital or breached the Capitol itself while Vice President Mike Pence presided over a joint session of Congress.

Larry Rendall Brock Jr., 53, a retired Air Force lieutenant colonel who was photographed on the Senate floor in a tactical helmet and vest, holding zip-tie handcuffs, was arrested in his native Texas on Sunday, The Dallas Morning News reported that day. He was charged with the same counts of unlawfully entry and disorderly conduct on the Capitol grounds, according to the Justice Department on Sunday.

Brock is a combat veteran who served in Afghanistan, The Dallas Morning News reported. Veterans he served with and family members were quoted in The New Yorker on Saturday saying Brock is a fervent Trump supporter who holds white-supremacist views.

Army Capt. Emily Rainey, who said she led a group to the rally in Washington, is awaiting discharge from the service after she resigned her commission last year, according to an Army spokesman Monday. The psychological operations officer from Fort Bragg, N.C., has claimed that she did not breach the Capitol building, The Associated Press reported Sunday.

A pair of veterans were killed in the violent uprising last week. Capitol Police officer Brian Sicknick, 42, died at a hospital Thursday after being hit in the head with a fire extinguisher while engaging with protesters, The Associated Press reported Saturday. He served in the Air National Guard and had multiple overseas deployments.

Air Force veteran Ashli Babbitt was shot and killed by Capitol Police while trying to climb through the broken glass of a barricaded door leading to the House chamber where members of Congress were sheltering in place.

Babbitt espoused support for QAnon on social media prior to the attack, The Los Angeles Times reported Friday.