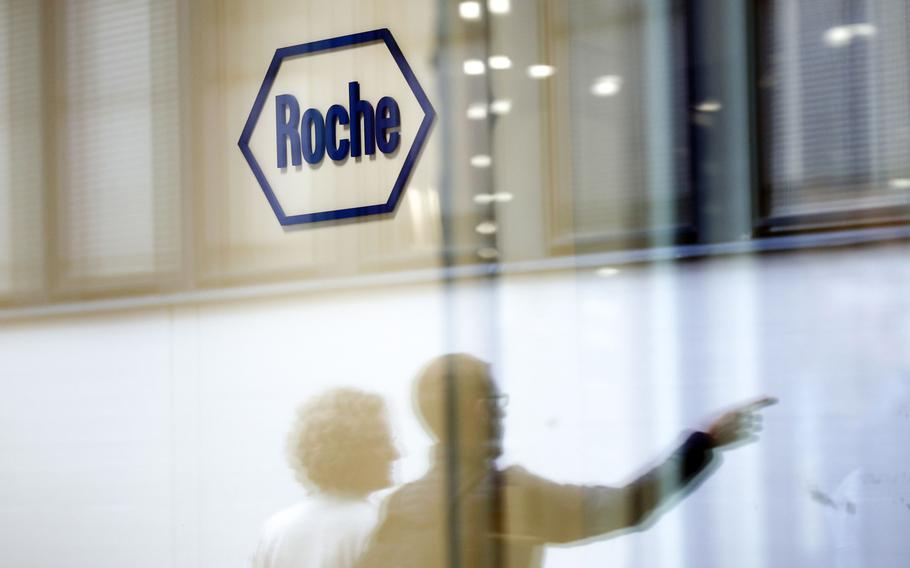 A company logo hangs on the wall at the Roche Holding headquarters in Basel, Switzerland, on April 26, 2018. (Stefan Wermuth/Bloomberg)

An experimental Alzheimer's therapy developed by AC Immune and Roche Holding slowed patients' rate of cognitive decline in a study, another hopeful sign for a field that has faced years of setbacks.

The antibody, known as semorinemab, targets a protein called tau that is thought to play a role in Alzheimer's. The treatment reduced cognitive decline from baseline by 43.6% compared to placebo in people with mild-to-moderate disease, AC Immune said Tuesday. Researchers didn't see an impact on functional decline, the other main target of the study, and the experimental drug failed to meet some secondary goals.

Alzheimer's is in the spotlight after the controversial recent approval in the U.S. of Biogen Inc.'s Aduhelm, seen as a positive sign for other drugmakers such as Roche. Despite the mixed results, the 272-patient study is the first time that an anti-tau antibody has been able to show a therapeutic effect, AC Immune said. Most Alzheimer's treatments have focused on reducing another disease-related protein, called amyloid.

"This is what we were all waiting for," Chief Executive Officer Andrea Pfeifer said in an interview. "This study brings credibility to the field. We have not answered all the questions, obviously. We don't have all the clarity on the data, but it brings back solid clinical assessment. It brings back tau as a target."

The shares surged 60% as of 9:50 a.m. in New York in trading. The stock has now more than doubled so far this year and joins other smaller biotechs like Cortexyme Inc. and Prothena Corp. that have garnered triple-digit gains this year as the chase for new Alzheimer's disease treatments heats up.

The update was a surprise after a prior trial in a mild form of the disease failed. Tuesday's results, while positive, are still "not a home-run," Jefferies analyst Lucy Codrington wrote in a research note. Caution is "still warranted," she said, adding that the other goals of the study may need longer treatment to show an effect. She rates the stock a buy.

Roche said it will continue monitoring patients in the open-label portion of the study in order to understand the mixed results. The Swiss drug giant called the results "another important step in our understanding of the role of tau."

It's still uncertain what AC Immune's findings could mean for patients. The trial was relatively short, and further data may be important in understanding the potential of the experimental treatment, according to the company. More detailed results are expected to be presented in November.