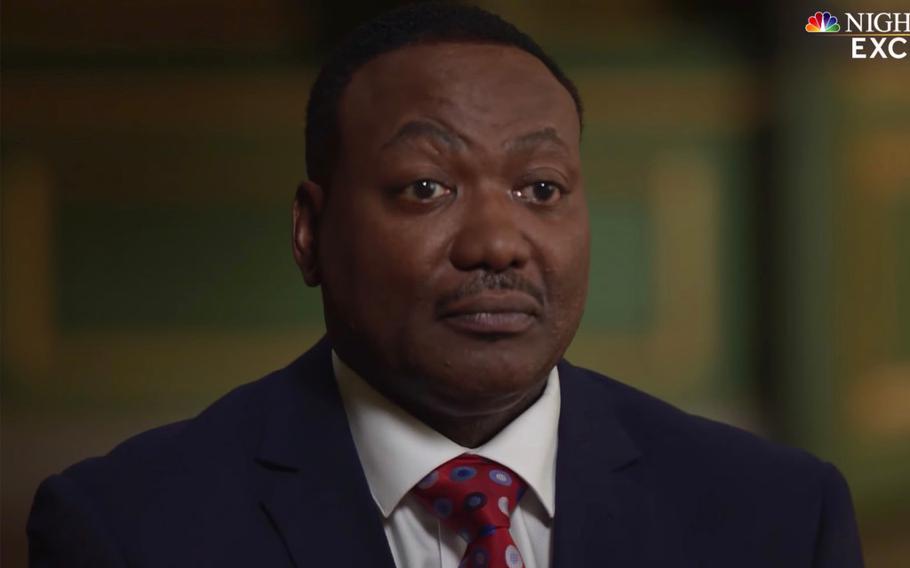 Michael Byrd, the Capitol Police officer who fatally shot a pro-Trump rioter who stormed the U.S. Capitol during the Jan. 6 insurrection, publicly revealed his identity Thursday in an exclusive interview with NBC Nightly News. (NBC News)

WASHINGTON — The Capitol Police officer who fatally shot Ashli Babbitt, a pro-Trump rioter who stormed the U.S. Capitol during the Jan. 6 insurrection, publicly revealed his identity Thursday in an exclusive interview with NBC Nightly News.

Michael Byrd, a 28-year veteran with the Capitol Police, said he only fired his gun that day as a “last resort,” and that he was trying to protect about 60 to 80 House members and staff who were sheltering beyond the glass doors of Speaker’s Lobby outside the House chamber.

“Once we barricaded the doors, we were essentially trapped where we were,” Byrd told NBC Nightly News host Lester Holt. “There was no way to retreat. No other way to get out.”

Babbitt was among a group of supporters of former president Donald Trump who made their way deep inside the Capitol on Jan. 6 to try to stop the certification of President Joe Biden’s election victory. The pro-Trump mobs overran the Capitol complex in a violent siege that later left five people dead.

The group Babbitt was with was battering the doors to Speaker’s Lobby, the hallway outside the House chamber where some lawmakers and House staff members were sheltering, when Babbitt attempted to crawl through a shattered window pane in the doors.

Byrd, who was standing on the far side of the doors, fired a single shot at Babbitt, sending her tumbling backward onto the floor. Babbitt was hit in the shoulder and later died.

“I tried to wait as long as I could,” Byrd told Holt. “I hoped and prayed no one tried to enter through those doors. But their failure to comply required me to take the appropriate action to save the lives of members of Congress and myself and my fellow officers.”

Byrd said it was “impossible” to see what was on the other side of the doors because of furniture stacked on his side of the door, and that he did not know Babbitt’s intentions as she started coming through the broken window pane.

“I could not fully see her hands or what was in the backpack or what the intentions are,” Byrd told Holt. “But they had shown violence leading up to that point.”

Without naming Byrd, an internal investigation by the Capitol Police found no wrongdoing by the officer who shot Babbitt, the law enforcement agency announced this week. The probe determined the officer’s use of force was within the department’s guidelines, which allow deadly force when an officer believes they are protecting themselves or others from serious harm.

The finding followed a similar assessment by the Department of Justice, which declined to pursue criminal charges against the officer in April. That investigation found there was not enough evidence to conclude the officer had violated Babbitt’s civil rights and it was reasonable for the officer to believe he was firing in self-defense or defense of members of Congress.

Despite those findings, Babbitt has become something of a martyr to the far right embraced by Trump himself, who called her family to offer his condolences over her death. Trump has in recent months brought Babbitt up in numerous statements and interviews, referring to her as “an innocent, wonderful, incredible woman.”

The identity of the officer who killed Babbitt has increasingly been the target of online sleuths as well, and Byrd’s name had been circulating on far-right blogs since early this summer. Conservative activists appeared to identify Byrd in part by zeroing in on a bracelet visible during the shooting that appeared to match one visible on a plainclothes officer earlier that day on the House floor.

On July 7, Real Clear Politics named Byrd in a story, citing the bracelet, as well as a transcript of a Feb. 25 congressional budget hearing in which the acting House sergeant-at-arms cited Byrd by name. Conservative activist Charlie Kirk and others pounced on the Byrd story almost immediately in July, leading to hundreds of threatening messages posted online.

In the interview that aired Thursday, Byrd pushed back on accusations that his actions were politically motivated, adding that he had previously escorted Trump through the Capitol when he was president.

“I do my job for Republican, for Democrat, for white, for Black, red, blue, green,” he said. “I don’t care about your affiliation.”

Byrd, who is Black, said that after his name leaked, he has faced threats, including racist attacks.

“They talked about killing me, cutting off my head,” Byrd said. “It’s all disheartening because I know I was doing my job.”

He stood by his actions. “I know that day I saved countless lives,” Byrd said. “I know members of Congress, as well as my fellow officers and staff, were in jeopardy and in serious danger. And that’s my job.”

The Washington Post’s Justin Jouvenal contributed to this report.