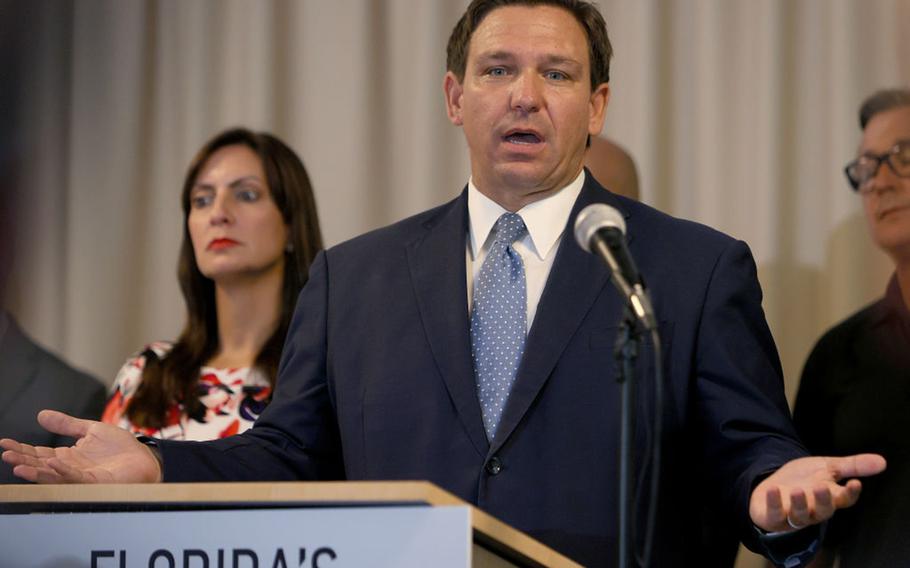 TALLAHASSEE, Fla. (Tribune News Service) — A Leon County judge ruled Friday that Gov. Ron DeSantis overstepped his authority when he signed an executive order to block school mask mandates, delivering a blow to the Republican leader as the debate over parental choice intensifies in Florida.

Leon County Circuit Court Judge John C. Cooper shredded the governor’s order leading up to his determination that it was unconstitutional. The conclusion came after a four-day trial in a case brought by parents from Hillsborough, Pinellas, Alachua and Palm Beach counties.

Cooper pointed out that DeSantis’ executive order drew its authority to ban mask mandates in schools from the state’s “parents’ bill of rights” law.

“This orphan statute does not support a statewide order or any action interfering with the constitutionally provided authority of local school districts to provide for the safety and health of children, based on the unique facts on the ground,” Cooper said.

The law says the state is not allowed to “infringe on the fundamental rights of a parent to direct the upbringing, education, health care, and mental health” of a child “without demonstrating that such action is reasonable and necessary to achieve a compelling state interest.”

“My ruling in this case, if you want to put it in one sentence is, I am enforcing the bill passed by the Legislature and requiring that anyone who uses that bill to follow all provisions and no part of the provisions,” Cooper said, noting defendants used the first half but not the second part of the statute when it issued its order.

Cooper said the Florida Department of Education can enforce the law, but “they have to do so in accordance with the terms of the law.”

“I am not saying yes or no to any particular policy,” Cooper said, noting that school boards can enact health and education policies — such as mask mandates — as long as they “demonstrate its reasonableness and the other factors in the law.”

The case, at its core, pitted personal liberty versus collective responsibility. Cooper concluded his nearly two-hour oral ruling by acknowledging that parents’ rights are “very important,” but they are not without some reasonable limitation to protect the rights of others.

At the start of the ruling, he used the consumption of alcoholic beverages as an example.

DeSantis’ order, issued last month, directed his Department of Health to craft an emergency rule that says school mask mandates must have an opt-out for parents. The Florida Department of Education is enforcing the rule, and threatening to withhold state funds — or more — from school districts that defy the administration’s order.

Ten of the state’s 67 school districts have imposed mask mandates with only a medical opt-out. Education commissioner Richard Corcoran, invoking the state’s “parents’ bill of rights,” has said requiring a doctor’s note as an exception is a “blatant” violation of the law.

President Joe Biden has said his administration intends to step in to support local school officials who are financially penalized by the state.

The DeSantis administration is expected to file an appeal, which would place Cooper’s order in abeyance until it can be heard. The same thing happened a year ago, when a Leon County judge ruled against the state in a reopening lawsuit.

If the state appeals, plaintiffs’ attorney Charles Gallagher said he will immediately ask the trial court to vacate the automatic stay that comes with the state’s appeal so the judge’s order can take effect while awaiting the next phase of the case.

Cooper arrived at his ruling after listening to three days of testimony and nearly three hours of closing arguments on Thursday. Even as the pleadings wound down, the judge indicated he was struggling with the details.

“I took a lot more notes than I normally do,” Cooper said in the waning moments of the hearing. “I’m still wrestling with pretty much all the issues.”

He asked several questions of plaintiff’s lawyer Craig Whisenhunt, who worked to make clear that the case was not about whether masks are effective in stemming virus spread in schools. Rather, Whisenhunt said, it was about “the governor’s overreach into the responsibilities of school boards.”

Whisenhunt suggested that the proper procedure should have started with a district issuing a mask mandate, followed by a legal challenge under the parental bill of rights law, and then, a court ruling on the issue.

“That isn’t what happened,” Whisenhunt argued. “The governor proactively jumped ahead of everybody” in issuing an executive order interpreting the law, that his departments of health and education then executed.

Whisenhunt, in part, asked Cooper to stop Corcoran and the department of education from enforcing “the unconstitutional order they’re currently beating school districts down with to force compliance into unsafe environments.”

Cooper wondered, though, how he could rule against the implementation of a rule set forth by the Department of Health when the plaintiffs did not include the department in their complaint.

He also had concerns about how he might work through a recent 1st District Court of Appeal precedent that appeared to set guidelines for the role of the courts versus those of policy makers.

Michael Abel, the lawyer representing the governor and other state defendants, raised those issues in his summation.

“The plaintiffs framed this case as a constitutional challenge. But at its heart, this is a case about a policy difference,” Abel said. “They are asking you to second guess the political branches and implement a different policy.”

He said the court should not intrude in the governor’s discretionary decisions in education policy, in this case in-person learning, public health policy, including the department of health rules and the state’s new parental bill of rights law.

“It is not one or the other, it is both. You can protect public health and have parent choice,” Abel said. “The governor’s executive order reflects a careful balancing of those interests involving children and parents, safety and health.”

The districts in Broward and Miami-Dade counties are among the districts that have defied the state’s mask orders.

The Florida Department of Education has initiated the process of sanctioning Broward, but not Miami-Dade. Corcoran said the state will withhold state funds from Broward in an amount equal to the salaries of all school board members who voted in favor of a mask mandate, unless they reverse their policy.

Broward Superintendent Vickie Cartwright and School Board Chair Rosalind Osgood said this week the mask mandate will remain in place.

“We don’t believe we have done anything inappropriate as it relates to the execution order or the rule of the Department of Education,” School Board Chair Rosalind Osgood said on Tuesday . “So, we have instructed our lawyers, our legal counsel, to seek legal avenues so we can challenge these things that we believe are out of line.”