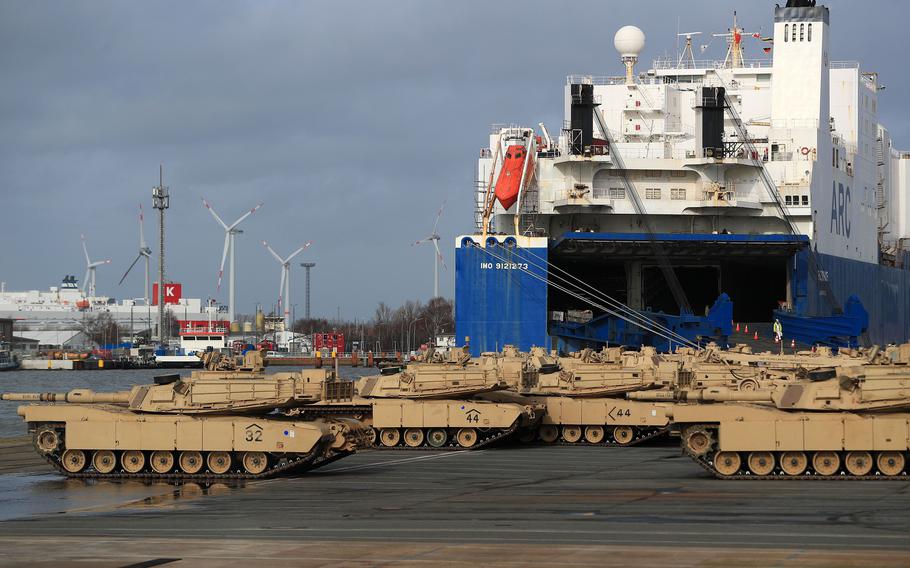 A platoon of M1 Abrams battle tanks, manufactured by General Dynamics Land Systems, sits next to the Endurance vehicle carrier during the U.S.-led NATO Defender Europe-20 Exercise at the Port of Bremerhaven in Bremerhaven, Germany, on Feb. 21, 2020. (Krisztian Bocsi/Bloomberg)

U.S. defense spending is likely to remain strong even as President Joe Biden focuses on domestic programs such as child care and infrastructure, according to the chief executive officer of General Dynamics Corp., which makes Abrams tanks and nuclear-powered submarines.

"Funding is driven by the threat, or the perception of threat, irrespective of political party," Phebe Novakovic said in an interview with Carlyle Group co-founder David Rubenstein that was recorded on Aug. 17. "President Biden has been a longtime supporter of national security. So, this year's budget for defense had a nominal increase in it."

Current risks range from Russia's takeover of the Crimea, which could cause instability in Eastern Europe, to China's increased military presence in the South China Sea and its crackdown on democracy in Hong Kong. Then there's the Taliban's takeover of Afghanistan.

Speaking from Sterling Heights, Mich., where the company's Land Systems unit is located, Novakovic, 63, said that U.S. defense companies are crucial for keeping the country and the world safe, especially when diplomacy fails. General Dynamics is the only maker of tanks for the U.S. military.

"We cannot go to war as a nation without us," said Novakovic, who worked at the Office of Management and Budget under two presidents, as well as the Pentagon before joining General Dynamics. "We make all the products and services that provide our service people with the weapon systems and protective devices they need to survive and win."

Tanks will be needed even as warfare evolves and becomes more space-based, Novakovic said, because conflicts have always been won "with boots on the ground, or taking territory." The larger defense expenditures, though, will be on submarines, she said. General Dynamics builds the Virginia class of attack submarines, which take almost six years to make. It's also going to build a new ballistic missile submarine, the Columbia class, which will take seven years to complete.

"U.S. underwater supremacy is critical to our national security," she said. "The more submarines that we can put in the water, the better off we are to protect our shores as well as to protect our assets overseas."

Novakovic became CEO of General Dynamics in January 2013, and, along with Marillyn Hewson, who led Lockheed Martin Corp. from 2013 through last year, opened the door for other women to rise to the top in the defense industry. They include Kathy Warden, who heads Northrop Grumman Corp., and Leanne Caret, CEO of Boeing's defense unit.

Novakovic, whose father was a Serbian immigrant who lived under fascist and communist regimes and later joined the U.S. Air Force, said she never imagined early in her career that she'd end up as a CEO. But that's not because she's a women, said Novakovic, who joined the Central Intelligence Agency right out of college and became a case worker, also known as a spy.

"I've never thought women were constrained from being anything that they wanted to be," she said. "So, I didn't think about it in terms of gender."

After the coronavirus swept across the world and shut down many businesses, General Dynamics kept its manufacturing running, including its tank plant and submarine operations. She also insisted that company leaders come into the office as an example to factory workers.

"I felt passionately about keeping our senior leadership in their offices," she said. "If the workers were on the floor at the tank plant making tanks, or in the shipyards building our ships, we were going to be at our posts and standing watch. And we did that."

Novakovic's advice for women climbing the career ladder: "Be part of a team" and serve as well as possible.