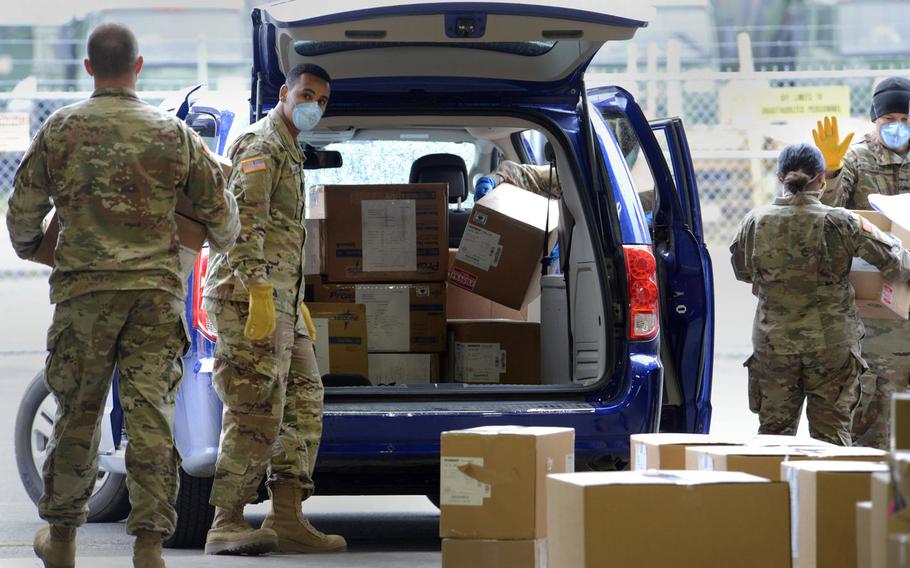 Oregon Army National Guard Soldiers have helped at various points during the coronavirus pandemic. These soldiers prepared boxes of personal protecting equipment and loaded them for local distribution. On Friday, Aug, 20, 2021, , about 260 soldiers were deployed to help at local hospitals in Southern Oregon. (Oregon National Guard)

(Tribune News Service) — About 260 soldiers from the Oregon Army National Guard gathered at the Medford Armory Friday to hear details of their latest deployment: To local hospitals, understaffed and overwhelmed by a surge in COVID-19 cases driven by the delta variant.

The men and women, mostly from the 1st Battalion, 186th Infantry, will serve six weeks, starting Monday. They will perform non-medical work such as being a uniformed presence in anxiety-filled waiting rooms in their communities, including at Asante hospitals in Medford, Ashland and Grants Pass as well as Providence Medical Center Medford and CHI Mercy Health in Roseburg.

For a century, 1-186 combat infantry soldiers of Southern Oregon have been sent to fight wars overseas and wildfires on the West Coast. They have helped Americans recover from devastating floods and hurricanes.

This is the second time, the group, known as the Guardians of the Western Gate, has been mobilized to help their local medical teams battle the coronavirus pandemic. They helped people getting vaccinated at the Jackson County Expo in Central Point when walk-in and drive-through clinics were open earlier this year.

Army National Guard soldiers with medical careers will stay on their full-time jobs as will first responders and those qualified for fighting wildfires, said unit commander Anthony Hess, who will lead his company at the Asante hospital in Medford.

“The battalion is engaged in multiple missions and you don’t want to rob Peter to pay Paul,” said Hess, who lives in Medford.

There are, however, about 20 medics assigned to the Ashland-based 1- 186th Infantry who can administer COVID tests and perform clinical work in the hospitals, and if necessary, in temporary field hospitals.

On Friday, Jessica Griego of Medford, a 14-year veteran of the National Guard, was at the Armory to start her new assignment: She’ll be keeping track of the other soldiers’ locations at the various hospitals.

Griego, who works for ColumbiaCare mental health agency for veterans in Medford, has experience in hospital record keeping but said her primarily role is to offer empathy.

The other soldiers at the Armory were learning about HIPAA privacy regulations and will be given their assignments this weekend.

“These are critical, non-clinical jobs,” said Major Billy Haden, a social worker and National Guard member who lives in Ashland.

All the soldiers will be masked and following CDC protocols but may not all be vaccinated. The National Guard follows the Defense Department in requiring U.S. military service members be to vaccinated against the COVID-19 virus by mid-September.

Haden said vaccination status was not part of the screening for this deployment.

Ryan Hutchinson, who leads the COVID-19 response command center at Providence Medford, said National Guard assignments were devised to lessen the burden on frontline caregivers and offset some of the nurses’ duties “to allow them to work at the highest level of their license.”

“People get upset waiting five to six hours and having a National Guard presence may provide some relief,” he said.

Pizzi said the National Guard will radio hospital security if a situation escalates, but will not step in.

“It’s all about keeping people safe,” he said. “We will find a good place for these helping hands to facilitate care.”

Hutchinson has seen the fear in people caused by limited beds, nurses and doctors. “The frustration is that everyone is going to the ER for everything,” he said. “If you have a non-emergent need, see your primary doctor or have a virtual visit. Get a Covid test at a drive-up. The ERs are full.”

Other National Guard assignments to relieve hospital employees may include monitoring entrances, taking temperatures and giving people directions. Others will be asked to deliver supplies, unload freight and clean non-infectious areas so hospital housekeeping can clean contagious areas.