Kamala Harris heads to China’s backyard in US diplomacy reboot 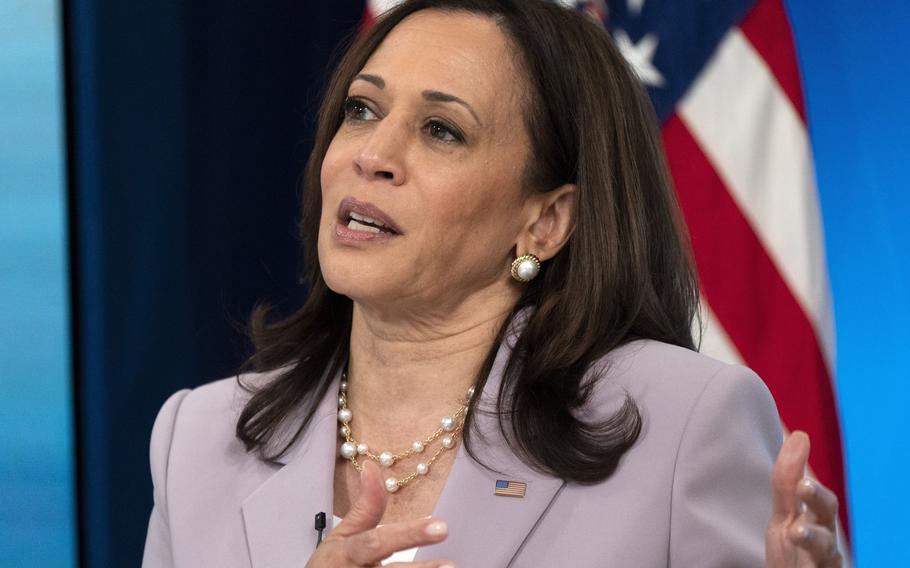 In this June 23, 2021, photo, Vice President Kamala Harris speaks in the South Court Auditorium on the White House complex in Washington. Harris faces perhaps the most politically challenging moment of her vice presidency Friday when she heads to the U.S. southern border as part of her role leading the Biden administration’s response to a steep increase in migration. (AP Photo/Jacquelyn Martin) (Jacquelyn Martin)

SINGAPORE (Tribune News Service) — Vice President Kamala Harris will look to bolster economic and military cooperation in China’s backyard as she visits Singapore and Vietnam starting this weekend in the Biden administration’s most high-profile trip yet to Asia.

The White House has gone on the diplomatic offensive in Southeast Asia after years of passive U.S. engagement, recently sending top diplomats to the region along with COVID-19 vaccines that have accounted for about a fifth of the 111.7 million doses it donated globally. In addition to securing a key military deal with the Philippines in July, the approach signals a more assertive posture in a part of the world that has grown more economically dependent on Beijing.

Southeast Asian leaders will be looking for Harris to reassure them of America’s role as a major trading partner that offers a reliable security presence against Beijing’s assertiveness in areas like the South China Sea. But they’re also wary of any comments that may force them to choose between the U.S. and China on issues from 5G networks to financial aid.

“In many ways, the U.S. is playing catch up in Asia as a result of its paying little attention to the region over the last 20 years,” said Carl Schuster, a former operations director at U.S. Pacific Command’s Joint Intelligence Center. “I can assure you no Southeast Asian country wants to choose between the U.S. and China. They see no benefits to choosing sides and a lot of disadvantages.”

For Harris, the trip is an opportunity to raise her international profile as she is expected to run again for president after she pulled out of the 2020 contest and later became Joe Biden’s running mate. But, as talks with Asian officials come amid concern from American allies over the U.S. exit from Afghanistan, she likely will face questions from reporters about Biden’s handling of the withdrawal.

Harris will receive intelligence briefings on Afghanistan during her trip and will be in regular communication with the White House, the officials said.

She is scheduled to hold a joint news conference with Singapore’s Prime Minister Lee Hsien Loong on Monday and participate in a roundtable focused on supply chain resilience. In Hanoi, she will launch the U.S. Centers for Disease Control and Prevention regional office in Southeast Asia.

Among the top priorities for both sides is filling the economic void left by the Trump administration’s withdrawal of the trade agreement now called the Comprehensive and Progressive Agreement for Trans-Pacific Partnership, CPTPP, which includes four Southeast Asian nations. Under Biden, the U.S. is discussing proposals for a digital trade agreement covering Indo-Pacific economies as a possible avenue to check China’s influence.

Trade between the United States and the 10-nation regional bloc known as the Association of Southeast Asian Nations, which represents the world’s fifth largest economy, was about $358 billion in 2019, according to U.S. government data. By comparison, Asean’s trade with China reached $684.6 billion that year, and has grown more than 80 times over the past 30 years.

“It is important for us to reestablish the connection,” Gan Kim Yong, Singapore’s trade and industry minister, said in an interview on Tuesday, adding that digital trade was on the agenda. “We do want to see stronger engagement from the U.S. in this region in terms of the economic area, as well as other areas, politics.”

Harris’s trip to Vietnam will mark the first time a sitting American vice president has visited since the war ended in 1975. Although former President Donald Trump held two historic summits with North Korean leader Kim Jong Un in Southeast Asia, he skipped other major gatherings in the region, stoking concerns over U.S. reliability.

Biden’s team is looking to repair that image, and has already adopted a less confrontational tone over China issues. Softening the ground further, the U.S. Treasury Department and Vietnam’s central bank in July reached an accord under which Hanoi’s government will allow more flexibility in its currency, easing a dispute in which the U.S. had discussed whether to impose tariffs on the Asian nation.

While the approach may help court a potential economic partner like Vietnam, experts caution any significant breakthroughs are still a ways off.

“I think Vietnam will welcome cooperation with Washington in a very cautious way,” said Le Dang Doanh, a Hanoi-based economist and former government adviser. “Vietnam has a very long land border with China. It has very close economic relations with China. Both sides will understand Vietnam needs to remain cautious.”

Senior Biden administration officials said Harris and her team are focused on the importance of the U.S.-Vietnam relationship and achieving outcomes to strengthen it.

The U.S. has also sought to bolster its security presence in a region where China has grown its naval capacity. That includes the South China Sea, one of the world’s busiest shipping routes where Beijing has long disputed swathes of territory with Southeast Asian claimants.

During a trip to Singapore in July, Defense Secretary Lloyd Austin pledged to work with regional partners to “deter coercion and aggression across the spectrum of conflict,” including Chinese maritime claims. Days later, he secured a key military pact with the Philippines that sets the terms for joint exercises and engagement of American soldiers there. The challenge for the U.S. now is building on the the deal while avoiding a military confrontation with China.

“A good deterrent strategy and an integrated diplomatic-economic-military-communications outreach approach should maintain the status quo,” said Schuster. “No one expects it to set the stage for shutting China out of the South China Sea or give up the territory it has already seized.”