Google’s ‘time crystals’ could be a breakthrough for quantum computers

Time crystals sound like majestic objects from science fiction movies that unlock passageways to alternate universes. In the Marvel universe, the "time stone" gives wielders control over the past, present, and future.

While that remains a fantasy, scientists have successfully created micro-scale time crystals for years - not for powering intergalactic spaceships, but for energizing ultrapowerful computers.

"Time crystals are like a rest stop on the road to building a quantum computer," said Norman Yao, a molecular physicist at the University of California, Berkley.

It's an area of interest for Google, which, along with physicists at Stanford and Princeton universities, claim to have developed a "scalable approach" to time crystal creation using the company's Sycamore quantum computer.

In a paper published last month on the research-sharing platform Arxviv.org, a team of over 100 scientists describe how they set up an array of 20 quantum particles, or qubits, to serve as a time crystal. During experiments, they applied algorithms that spun the qubits upward and downward, generating a controllable reaction that could be sustained "for infinitely long times," according to the paper.

Time crystals are scientific oddities made of atoms arranged in a repeating pattern in space. This design enables them to shapeshift over time without losing energy or overheating. Since time crystals continuously evolve and don't seem to require much energy input, they may be useful for quantum computers, which rely on extremely fragile qubits that are prone to decay.

Quantum computing is weighed down by hard-to-control qubits, which are error prone and often die. Time crystals might introduce a better method for sustaining quantum computing, according to Yao, who published a blueprint for making time crystals in 2017.

"Time crystals are a weighted benchmark, showing that your system has the requisite level of control," Yao said.

The scientists involved in Google's research say they can't discuss their findings as they undergo peer review.

However, the work tackles an area where physicists have long hoped for a breakthrough.

"The consequence is amazing: You evade the second law of thermodynamics," Roderich Moessner, a co-author on the Google paper, told Quanta Magazine.

The time crystal concept was first proposed in 2012 by Nobel-prize-winning physicist Frank Wilczek, who questioned if atoms could be arranged in time similarly to how they are arranged in ordinary crystals.

Essentially, he wondered whether a closed system could spin, oscillate or move in a repetitious manner. What followed was a healthy dose of scrutiny from the broader physicist community, years of university experiments with and without Wilczek, and testing to see if his vision was possible.

The definition expanded to include objects that would activate due to an external influence, such as a shake, stir or a laser strike.

"The definition is somewhat fluid. But if you want to call it a new state of matter, you want it to be autonomous and not have stirring," Wilczek said.

Early experiments pumped ions with lasers so they would artificially pulsate. It was useful but difficult to scale, Wilczek added.

By 2017, scientists from Harvard University and the University of Maryland revealed they created micro-scale time crystals at frigid temperatures in a lab. Both passed peer review. More recently, a team from the Delft University of Technology in the Netherlands published findings in July on their approach to building a time crystal inside a diamond. (Those findings haven't undergone peer review.)

Time crystals are a tough concept to grasp, but scientists say you can think of them like a perpetual motion machine, adding a caveat to the second law of thermodynamics, which states that any isolated systems will degenerate into a more disordered state or entropy. Their existence also undermines Newton's first law of motion, detailing how an object must react to motion.

Time crystals are the first objects created that spontaneously break "time-translation symmetry" or the idea that a stable object, such as solids, liquids, gases and plasma, will remain the same throughout time.

Google's work produced a time crystal that functioned for milliseconds, but the research looks promising, Wilczek said. The assumption is that once the hardware is more advanced, the resulting time crystals would last longer, he added.

"Nothing lasts forever, not even diamonds, their protons will eventually decay," Wilczek said. "If you can make something that has time crystal behavior that lasts millions of cycles, or thousands of cycles, it can support sensitive technologies. You can do a lot even if it's not perfect." 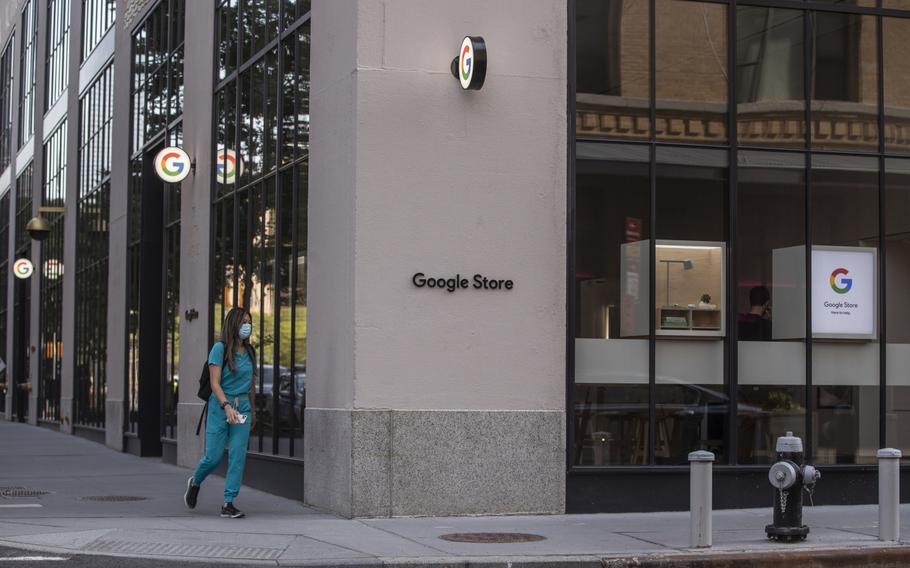 A pedestrian passes in front of the Google Store Chelsea in New York on May 28, 2021. (Victor J. Blue/Bloomberg)