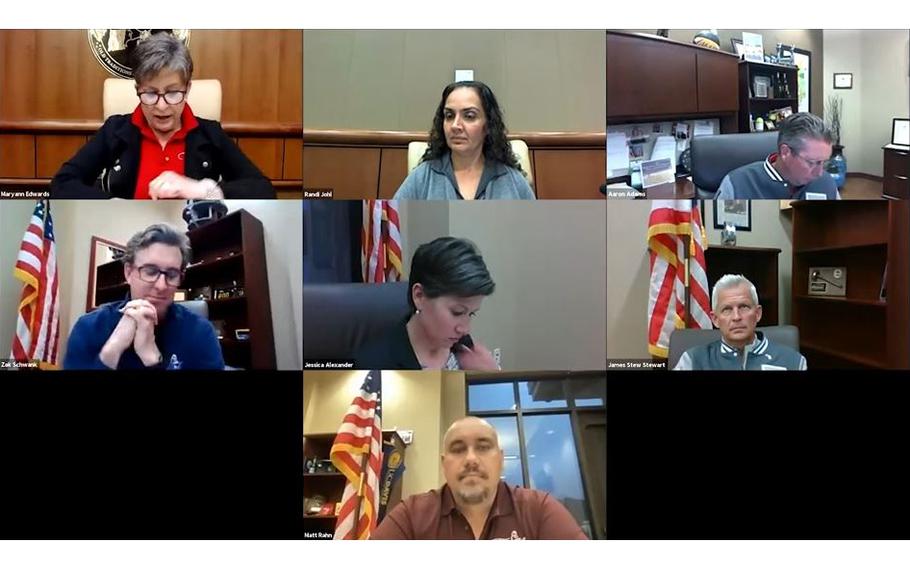 A video screen grab shows members of the Temecula, Calif., city council meeting in a videoconference call in April 2021. (YouTube)

Local government meetings often come with a designated time for public comment, offering a glimpse into the good, the bad and the strange of each community.

The coronavirus pandemic pushed many of these meetings online. But city councils and school boards around the country ran into a dilemma: Public comment, a time for people to speak their minds, was governed by the same policies that platforms such as YouTube applied to other content.

So when someone spoke up at a city council meeting and claimed the coronavirus vaccine was killing people or the virus wasn't real, the video could be taken down in its entirety - which is what happened in at least a dozen cases.

Frustrated officials raised concerns about censorship and limiting access to public meetings in response. Now, YouTube is reversing course, telling The Washington Post Friday that it has updated guidelines to "make exceptions for videos of school board or town hall meetings, where the intention isn't to promote misinformation."

The dozen videos that sparked controversy after being yanked have since been reinstated, YouTube spokesperson Elena Hernandez said.

"While we have clear policies to remove harmful COVID-19 misinformation, we also recognize the importance of organizations like school districts and city councils using YouTube to share recordings of open public forums, even when comments at those forums may violate our policies," Hernandez said in a statement.

The video platform has faced sharp criticism over the course of the pandemic, with allegations that it isn't doing enough to fight misinformation about the covid-19 disease or the virus that causes it, or is overstepping its bounds by policing information.

YouTube warned in March 2020 that users might see an uptick in content removal - including videos that were mistakenly taken down - as it worked to get a handle on covid misinformation. In January, YouTube CEO Susan Wojcicki said the platform had removed more than half a million videos for violating its covid-19 policies.

Clay Calvert, director of the University of Florida's Marion B. Brechner First Amendment Project, a nonprofit organization dedicated to issues of free speech, said YouTube was wise to reconsider how this policy would apply to public forums.

"It walks back a rather paternalistic policy that allowed it to play the role of arbiter of the truth," he said in an email. "Other citizens - not those who are speaking up - also have a right to know what their neighbors are saying at such venues and to decide for themselves the merit of their views."

As agencies across the nation have found, this can create an environment ripe for spreading misinformation. Several videos from public meetings that were taken down for violating YouTube's medical misinformation policies were ostensibly removed for comments made during public comment.

In North Carolina, the Henderson County Board of Commissioners uploaded a video of a meeting where about a dozen people claimed vaccines were "harmful and part of a hidden agenda," the Hendersonville Times-News reported. YouTube removed the video, igniting outrage over purported censorship and leading the board to adopt a new streaming platform.

Henderson County Commissioner Rebecca McCall, who said she spoke on behalf of the commission, questioned how YouTube could determine what was and was not misinformation.

McCall said the commission generally gives the school board funding for Google Chromebooks, but it is urging the schools to find a suitable substitute this year since Google owns YouTube.

"We have challenged our school board to find other access for computers and laptops for our children other than Google," she said, "and to move away from Google Chromebooks as quickly as they possibly can."

"For them to make such a drastic change indicates they must be receiving negative responses from other customers," she said in an email. "As far as I am concerned, this does not change our decision to use another platform."

After YouTube removed a video of a Bellingham, Wash., City Council meeting for medical misinformation shared during public comment, the council president decided to suspend public comment and continue streaming the meetings.

"This suspension is not a solution but rather a pause to preserve uninterrupted public access to meetings," City Council President Hannah Stone said in a statement. It is unclear whether Bellingham will reopen public comment following YouTube's announcement.

The Shawnee Mission School District Board of Education in Kansas voted to stop live-streaming the public comment portion of its meetings after one of its videos was taken down.

Heather Ousley, the board's president, said medical misinformation has caused "significant harm" in her community, and the video being taken down led to a discussion on how to preserve both public comment and the ability to post the meetings to YouTube.

She said she wasn't concerned about accessibility being lost because so many people record the meetings on their own, and local media outlets often cover them.

"We do actually have a community that will stay engaged," she said. "If they want to know what's happening at public comment, there will probably be someone providing it."

Ousley noted the human cost of disinformation after learning of YouTube's reversal.

"When governmental entities allow their platforms to be appropriated by those who intentionally spread disinformation, they bear responsibility for the harm that is caused," she said in a written statement. "There are ways to maintain public comment without publishing disinformation, and we've adopted a practice that will do that."