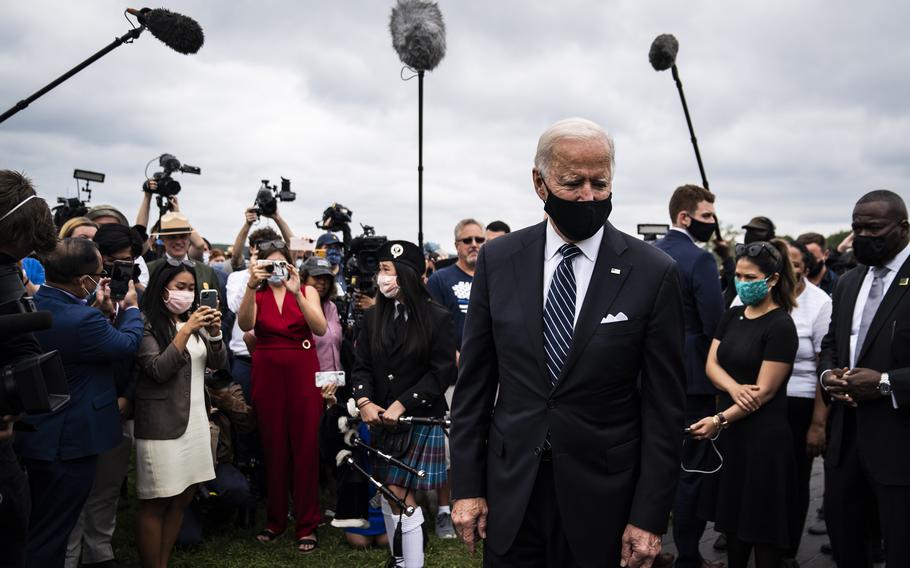 The Justice Department said Monday that it is reviewing evidence related to the 9/11 terrorist attacks, amid pressure from families of hundreds of victims who have pressed for more information on the role that may have been played by Saudi Arabia.

An advocate for some of the families responded by criticizing the move as insufficient and calling for the Biden administration to "provide the information the 9/11 community has waited to receive for 20 years, so we can stand together with the president at Ground Zero on 9/11."

The developments come days after the families sent a letter to the White House declaring that President Joe Biden is not welcome at this year's memorial events marking the 20th anniversary of the attacks unless he declassifies investigative evidence uncovered by the bipartisan 9/11 Commission that they say implicates Saudi Arabian government officials in supporting the attacks.

"Six months ago the 9/11 community had great hopes that President Joe Biden would be the long lost champion of those directly affected by this murderous attack on our nation, finally placing the values of truth, justice, and accountability before the interests of the Kingdom of Saudi Arabia," stated the letter, which was sent last week and signed by about 1,800 family members of 9/11 victims, survivors and first responders.

They added they have been frustrated by Justice Department and FBI officials who, through several presidential administrations, have "actively sought to keep this information secret."

Last year, as a presidential candidate, Biden visited both the 9/11 Memorial in Lower Manhattan and the Flight 93 National Memorial in Shanksville, Pa., for the 19th anniversary of the attacks. He reportedly is planning to attend the 9/11 memorial events in New York City next month.

In a court filing Monday, Audrey Strauss, the acting U.S. attorney for the Southern District of New York, said the FBI "has decided to review its prior privilege assertions to identify additional information appropriate for disclosure."

"The FBI will disclose such information on a rolling basis as expeditiously as possible," Strauss said in the filing.

Biden said in a statement Monday afternoon that he welcomes the Justice Department's filing, which "commits to conducting a fresh review of documents where the government has previously asserted privileges, and to doing so as quickly as possible."

"My heart and my prayers continue to be with the 9/11 families who are suffering, and my Administration will continue to engage respectfully with members of this community," he said. "I welcome their voices and insight as we chart a way forward."

But 9/11 family members argued Monday that the Justice Department's action is not enough.

Brett Eagleson, an advocate for 9/11 families who lost his father in the attacks, said in a statement that while he and others appreciate Biden's acknowledgment of their efforts to pursue justice and accountability, "We have heard many empty promises before."

"The DOJ/FBI have already had three years to 'review' the files and can act immediately to produce the documents including the unredacted 2016 FBI Review Report of the bureau's years-long investigation of Saudi government agents who 'are known to have provided substantial assistance to' the hijackers, as well as phone records and witness statements," Eagleson said.

Last week, in an interview with The Washington Post, Eagleson said he and members of other 9/11 families are "at their wit's end."

Eagleson said that the families' ultimatum was not politically motivated and that they had also implored Trump administration officials over the past four years to release the same government evidence.

The Washington Post's Devlin Barrett and Tyler Pager contributed to this report.