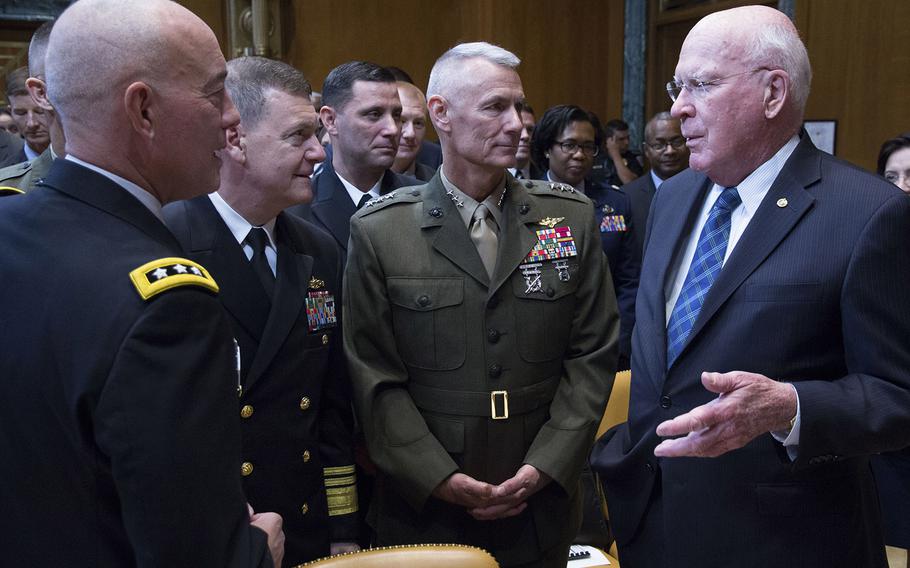 WASHINGTON (Tribune News Service) — Senate negotiators reached an agreement Tuesday on $2.1 billion in funding to boost security on Capitol Hill, reimburse authorities who responded to the Jan. 6 insurrection and support relocating Afghans who assisted the U.S. during the war.

The money would go to the National Guard after it was deployed in Washington, D.C., for the Jan. 6. riot and to beef up Capitol security to prevent future attacks.

The United States Capitol Police would receive more than $400 million under the agreement. Nearly $71 million of that is in response to the Jan. 6 attack and would support paying for overtime, hiring more officers, offering hazard pay, and giving out retention bonuses. More than $31 million would go to backfill overtime.

The department was not only understaffed on Jan. 6, but later investigations showed the department also was ill-prepared with tactical gear. In the months since, dozens of Capitol Hill police officers have quit.

The announcement of the deal came on the day several police officers delivered emotional testimony to the House select committee that is investigating the events surrounding the Jan. 6 attack.

Senate Majority Leader Chuck Schumer, D-N.Y,. told reporters Tuesday that he expects a vote on the funding to happen as early as this week.

"In large part because of the horrific events of January the 6th, the Capitol Police is running out of funding," Schumer said. "These brave officers put their lives on the line defending the Capitol — and each and every one of us — and they are heroes, plain and simple. They are to get the funding they need."

Shelby said in a statement Tuesday that "It is essential that we provide the National Guard and Capitol Police the funding they require without further delay."

Nearly 26,000 troops were deployed to the Capitol complex and Washington for President Joe Biden's inauguration after the riot. The agreement would provide roughly $521 million to reimburse the National Guard.

The Architect of the Capitol would receive $300 million to upgrade the complex, including windows, doors, new security cameras and more.

It also would provide $1 billion for Afghan refugee assistance and 8,000 new Afghan Special Immigrant Visas. In June, the Biden administration agreed to relocate thousands of Afghans who worked with the U.S. military as interpreters and translators while their visa applications are vetted.

That money would be split among federal agencies to, among other assistance, provide housing, transportation and other services for Afghan refugees.

If the Senate passes the bill, it will head to the House for final approval. The support of 10 Republicans is not solidified; that would be necessary to pass through the Senate chamber and overcome a filibuster.

The House passed a $1.9 billion spending proposal in May. It had no Republican support.

But House Majority Leader Steny Hoyer, D-Md., said Tuesday that if the Senate approves the measure this week, the lower chamber could vote on it before lawmakers leave for their August recess.

Leahy and Shelby want the legislation passed quickly, warning of upcoming depleting salaries among the Capitol Police and to "prevent cancellation of summer drills for members of the Army National Guard and Air National Guard," according to the agreement.