At march for slain National Guard member, family cries out for justice 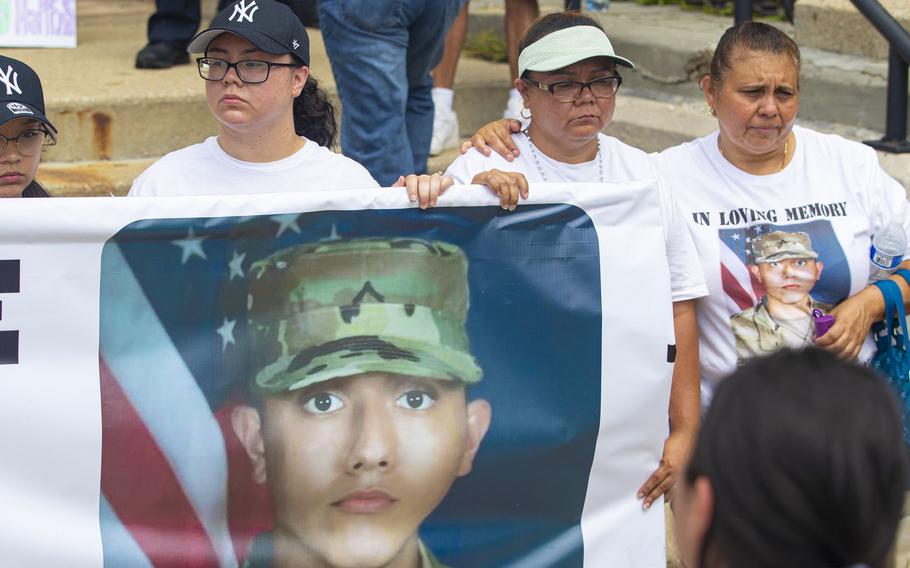 Jennifer Ramirez, left, and Lourdes Lara, the sister and mother of 19-year old National Guard member Chrys Carvajal, killed over the July Fourth weekend, hold a banner with Carvajal's photo on it during a rally for peace at Riis Park in the Belmont-Cragin neighborhood of Chicago on Saturday, July 24, 2021. (Vashon Jordan Jr., Chicago Tribune/TNS)

CHICAGO (Tribune News Service) — At the start of the march in honor of slain 19-year-old Chrys Carvajal, his sister and girlfriend each held a tall stack of flyers promoting a $10,000 reward for tips that lead to who killed the National Guard member earlier this month.

By the conclusion, only about a dozen sheets remained in each of their hands after the two diligently fanned out across the sidewalk, passing them to any business owner and pedestrian in sight. They walked by several posters with the same information that were already taped onto storefronts and light poles during their route on West Fullerton Avenue on the Northwest Side.

A crowd of about 70 community leaders, relatives and friends flanked the sister and girlfriend on the street, marching and chanting, “What do we want? Justice.” Cars honked back.

Carvajal’s sister, 25-year-old Jennifer Ramirez, said her dogged quest to seek information is both to do right by his memory and to channel her grief.

“All we could do now is continue to fight for his justice,” Ramirez said. “I just want to ask the community, if they know anything, if they saw anything, to please speak up. (It) won’t bring my brother back, but it will help us find justice and it will leave us at peace.”

Carvajal was fatally shot in the back and abdomen in the 2200 block of North Lockwood Avenue about 1:30 a.m. July 3 in the Hanson Park neighborhood on the Northwest Side, according to Chicago police. No one was in custody as of Saturday. He had recently completed Army basic training and was waiting to be assigned to a unit with the Illinois National Guard, a spokesman confirmed.

The 19-year-old grew up in the Austin neighborhood before his mother, who raised him and three other siblings, moved them to Portage Park out of fear of violence. Ramirez said her mother was trying to avoid Carvajal’s exact fate.

Carvajal, though the second-youngest child, doted on his mother and learned responsibility at a young age, Ramirez said. His chief concern was making enough money to help her retire early and pay off her mortgage. Now, the family must figure out how to access car, credit card, internet and other bill accounts because he had taken care of all the payments.

“That challenge of my mom being a single parent was something that he dealt with and shaped him to who he became, and also made him care and love so much for my mom,” Ramirez said. 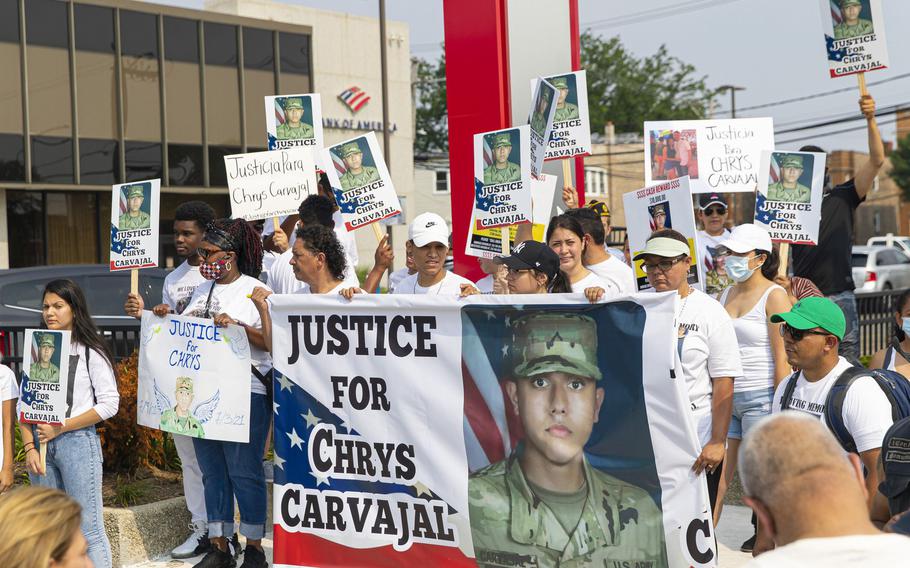 It was bittersweet when Carvajal was accepted into the National Guard. His family was scared to let him leave so fresh out of high school, but they understood it was his passion to protect others, Ramirez said. After his service in the military, he wanted to become a Chicago police detective.

Part of Carvajal’s dreams came from his girlfriend of four years, Citlali Olivares. The 20-year-old said she, too, has long strived to become a detective and that he enlisted to follow her into the National Guard. When Olivares watched his swearing-in ceremony after her own, it confirmed she was on the right path, she said.

Olivares said her boyfriend, though a protector, was also sensitive and quick to tamp down conflict. He was happiest whenever he was helping someone else.

“There was a point where our parents were like, ‘You guys are so inseparable,’” Olivares said. “It was a deep, deep connection. We didn’t have to do anything. We just had to be in each other’s presence.”

The 19-year-old had a silly side to him as well. He loved barging into Ramirez’s room and checking himself out in the mirror — usually while sporting a snazzy outfit, including his royal blue Nike Jordan high-tops.

The night of the shooting, Olivares and Carvajal got invited to a house party around the 2200 block of North Lockwood Avenue. They held hands the entire time so they would not lose each other in the crowd. But Carvajal remembered he forgot something in his car, so he peeled away.

Before he left, Carvajal gave Olivares a hug, gazing into her eyes and remarking at how beautiful she was. She got embarrassed, but he repeated the compliment before giving her a kiss. “I’ll be back,” he said. He was shot outside before he could make it to the car.

“That’s what his last words (were): I’ll be back,” Olivares said. “I’m still waiting to this day.”

Ramirez said while she was at her boyfriend’s house that night, her younger sister called, saying something was wrong with their mother. In the background, their mother cried out, “My son. My son. Oh, why? My son.”

That’s when Ramirez knew — somehow — that Carvajal was in trouble. Her other younger brother joined them at their mother’s house, pleading, “Please tell me my brother’s not dead.”

The lack of closure is the most difficult part about losing her brother to gun violence, Ramirez said. Waking up every morning, she must remind herself that he’s gone, that he won’t walk in the door and exclaim, “I’m back!”

Ramirez had briefly moved to Indianapolis earlier last year, but she returned to Chicago out of homesickness. The city, with its beautiful skyline, larger-than-life neighborhoods and the faces of those she loves, was home to her, she said. But now, she wants to move out.

“Our city, there’s more violence than there is love and support throughout the community,” Ramirez said. “Now that I’m home, my brother’s not there. My family’s broken.”