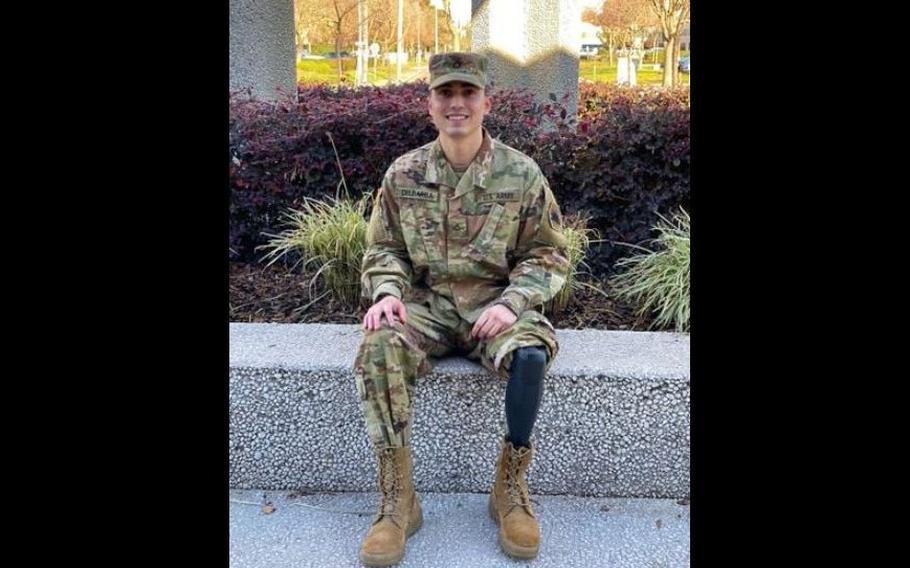 Dez Del Barba in uniform. Mark Del Barba, director of development and co-founder, and Kamini Del Barba, vice president and co-founder, are the parents of Dez Del Barba, 21, who developed Streptococcus A, a type of strep throat, just five weeks into basic training for the U.S. Army at Fort Benning in Georgia. Even though he was seen by eight medical professionals at his base, none of them provided the basic care he needed, his parents said. (Facebook)

STOCKTON, Calif. (Tribune News Service) — Many young adults grow up with dreams of one day serving their country, wearing a uniform proudly and serving the nation that they love, putting their own life on the line for freedom.

Often, though, they are unaware of their own rights, or of the conditions that they will be placed in to achieve that dream. Many are also unaware of the Feres Doctrine (the Federal Tort Claims Act) — the “best kept open military secret.”

“There has to be a level of awareness; you have to understand what you’re getting yourself into,” said Manuel Vega, president and co-founder of Save Our Servicemembers.

Save Our Servicemembers (SOS) is a nonprofit organization that just launched its website on July 8. Its mission, as stated on the nonprofit’s website: “SOS is here to provide a voice for change, to better our military for the sake of our future Soldiers, Sailors, Marines, Airmen and Guardians. Our children and our loved ones deserve the best from ‘a grateful nation.’ “

The board members share their experiences in hopes of raising awareness and so that sharing what they have learned and experienced might keep what happened to them from happening again to other families. They hope to advocate for victims of military malpractice and negligence.

Medical malpractice and negligence is something that they unfortunately experienced with their own sons, and they are hoping the nonprofit helps raise awareness about knowing your rights and becoming mentors to others.

Manuel Vega, president and co-founder, and Amy Vega, operations director and co-founder, are the parents of Patrick Vega, 20, who died during his second week at Marine Recruit Depot San Diego during boot camp in 2018. During his second week, Vega became ill; he was later found on his bed, unresponsive and with no pulse and was immediately rushed to the Naval Hospital just a few miles away from his base. Vega was placed on life support and just two days later he passed away as a result of the common cold.

“Our son Patrick died of the common cold from negligent medical care. We partnered with other grieving families to push for true accountability at the highest levels of the US Armed Forces. Unfortunately, the military has always been guarded and most details leading up to tragic events are rarely ever disclosed. In most cases, we discovered the investigations were conducted by the same military command in question,” Manuel Vega said in a news release on July 8.

The nonprofit was founded during the summer of 2020 by a group of Gold Star and military families affected in one way or another by military malpractice and negligence.

“We all decided that we needed to get together and form a nonprofit and start helping other families and telling stories of our loved ones who have either been injured or passed away, so that’s why we created this website,” Amy Vega said.

Mark Del Barba, director of development and co-founder, and Kamini Del Barba, vice president and co-founder, are the parents of Stockton native Dez Del Barba, 21, who developed Streptococcus A, a type of strep throat, just five weeks into basic training for the U.S. Army at Fort Benning in Georgia. At the time their son was stricken, Mark Del Barba was a correctional officer at Deuel Vocational Institution in Tracy and Kamini Del Barba worked in the human resources department at Stockton Unified School District.

Even though he was seen by eight medical professionals at his base, none of them provided the basic care he needed, his parents said. This caused Dez’s health to worsen, and he developed the rare flesh-eating disease necrotizing fasciitis. He ultimately ended up at the hospital on Feb. 11, 2019, when he had his first surgery, one of many to remove dead tissue caused by the disease. His life on the line as strep throat escalated into a disease that put Dez’s life in danger, his left leg had to be amputated. Dez’s journey has not been easy since then. On July 22, he will be having another surgery; his 22nd surgery was in September 2019.

The heroes that put their lives on the line to fight for freedom are not always so free themselves, advocates say. Under the Feres Doctrine, military service members that become injured as a result of military service are prevented from successfully suing the federal government.

On June 16, the Congressional Research Service (CRS) released a document titled “Military Medical Malpractice and the Feres Doctrine,’‘ which highlights standards and procedures related to medical malpractice claims and explains how that plays a role: “During the 116th Congress, the House passed a version of the Fiscal Year (FY) 2020 National Defense Authorization Act (NDAA; H.R. 2500) that proposed to modify the Feres Doctrine to let servicemembers sue the United States for military health care providers’ malpractice.”

The Department of Defense issued a 57-page document on June 17.

“This interim final rule implements requirements of the National Defense Authorization Act (NDAA) for Fiscal Year 2020 permitting members of the uniformed services or their authorized representatives to file claims for personal injury or death caused by a Department of Defense ( DoD) health care providers in certain military medical treatment facilities. Because Federal courts do not have jurisdiction to consider these claims, DoD is issuing this rule to provide uniform standards and procedures for considering and processing these actions.”

The American public has until Aug. 10 to send in comments for consideration.

“The simple fact that convicted murders, rapists and child molesters in our Federal and State prison systems have more constitutional rights and better access to medical care than our active duty service members is incredibly wrong,” nonprofit organizers shared on the SOS website.