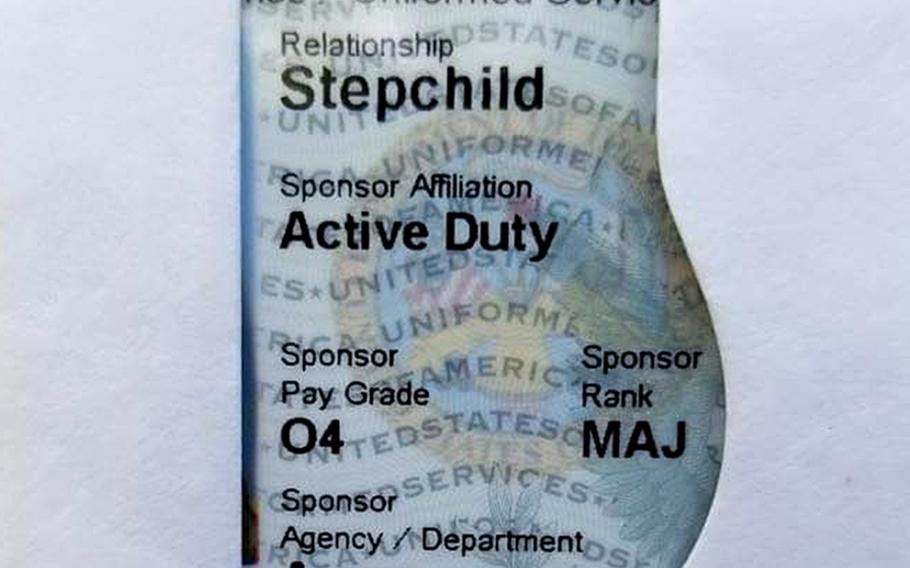 The military will fix its new dependent identification cards to remove the relationship designation “stepchild,” the Pentagon said July 16, 2021, after military families and advocates complained. (Twitter)

The new military dependent ID cards issued to military spouses’ children from previous partners will be changed to remove the designation of “stepchild,” the Pentagon said Friday after advocates complained that the label was insensitive.

The issue gained attention this week after a Twitter user named @justjsides posted a photo of a new plastic “next generation” ID card displaying “stepchild” in bold to describe the dependent’s relationship to their military sponsor.

“The Defense Manpower Data Center has reviewed the concerns raised and DMDC will modify the ID Card System, so that the term ‘Step Child’ is replaced with the word ‘Child,’” said Maj. Charlie Dietz, a Defense Department spokesman.

Dietz could not immediately say when the change would happen. For adopted children, the cards already state “child” in that field, he said Friday in an emailed response to a Stars and Stripes query.

Child and stepchild appeared in a less conspicuous location on the paper-based ID cards that are being phased out, abbreviated as CH and SC. Dietz said three other categories were also used: foster child (FC), ward (WARD) and pre-adoptive child (PACH). Those are also now spelled out on the replacement cards.

The terms are used in the Defense Enrollment Eligibility Reporting System, or DEERS, but parents of many blended military families don’t use them and deemed their appearance on ID cards as unnecessary and unintentionally hurtful.

Shannon Taylor, a spouse of a retired sailor, provided Stars and Stripes with an email she sent to a Navy regional family readiness office in early July to complain about the new ID card after her children got theirs.

“It was rather devastating to see in bold letters on the front of the card the designation of STEPCHILD,” she wrote. “It was actually the first thing my [14-year-old son] stated when he looked at the card. His dad has been his dad since he was 3 years old and we firmly believe that our family is a unit, there is no step anything. We’re all in.”

It was even more disappointing, she said, given the challenges children of military families face with developing roots and long-term connections because they move frequently.

“Blended families experience challenges within the familial unit related to stepchildren feeling equal in love and acceptance as biological children,” she wrote.

A Navy civilian responded to tell Taylor he had raised the issue with higher echelons, including the office of the chief of naval operations, and “they immediately addressed the issue” by contacting the office responsible for ID card policy.

“We all regret that your son had this experience, and I hope he understands that he is very much a part of the Navy family,” wrote Matt Straughan of the Commander, Navy Region Southeast family readiness office.

The news of the change was greeted with a celebratory “woohoo” by Kristen Bates, an Army wife based at Fort Bliss who originally shared the image of the ID card online to a spouses’ page before it was posted to Twitter and shared by dozens of accounts, including several with wide audiences.

She had complained about the issue in an email to DMDC on July 13 and received a prompt reply telling her the use of the term was an oversight and wasn't meant to cause distress. It said officials were looking into whether they could fix it.

Bates saw DOD’s decision Friday to rectify the issue as another example of the kind of positive change that spouses and military family advocates can make when they speak up, she said in a phone call Friday.

But the self-described Air Force brat said she is also familiar with how long changes can take to implement and is awaiting word on when the changes will be made.