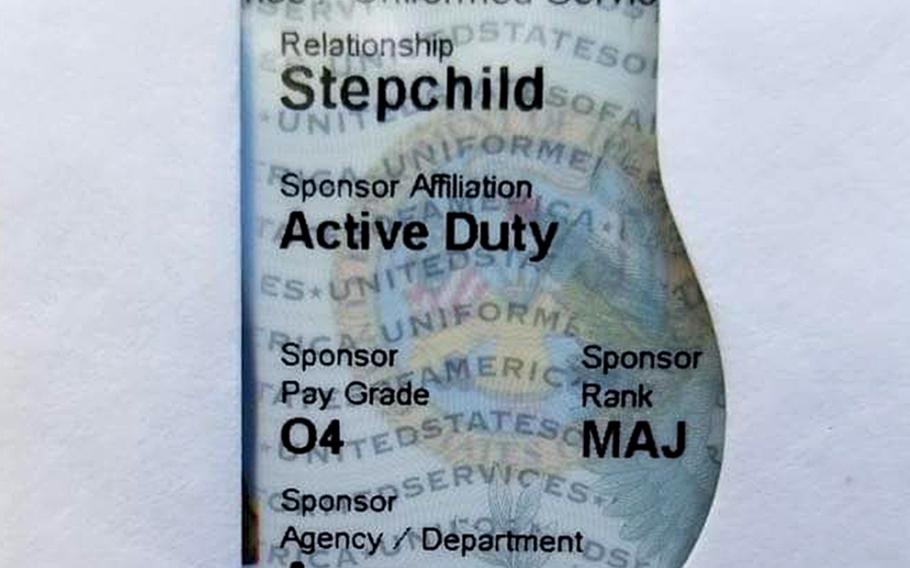 New Defense Department identification cards for military dependents display relationships more prominently than past versions, including the word stepchild for children who are not biological or adopted offspring of their military sponsor. (Twitter)

Service members and spouses are calling for change to the military’s new dependent ID cards this week over the way the relationship field identifies spouses’ children.

The Defense Department began transitioning last summer from its paper uniformed services ID card to a plastic “next generation” card similar to the Common Access Card used by DOD personnel. The card is meant to be more secure and harder to counterfeit.

But a photo posted on social media Wednesday drew controversy over the card’s use of the term “stepchild” in a field listing the relationship between the dependent and the military sponsor. Biological offspring are listed only as “child,” social media users said.

“Why are we now specifying *stepchild* on dependent IDs?” wrote Twitter user @justjsides, whose profile lists her as an Army spouse, in the original post sharing the photo of the new ID.

The tweet was shared 100 times as of Thursday morning, including by accounts with high numbers of followers and some who tagged top military leaders or official accounts.

Some were concerned the new cards might reveal a child’s adoption status, apparently based on the fact that the Defense Enrollment Eligibility Reporting System, or DEERS, requires different documents, depending on a child's legal relationship to their sponsor.

“My daughter has never called herself a stepchild,” @justjsides said in a follow-up tweet. “We’ve never used that term really. I think if she saw this on her ID it would hurt her.”

The word “never saw the light of the day in my blended military family,” said Fred Wellman, in a retweet of the photo. A retired Army officer and the executive director of political action committee The Lincoln Project, Wellman has more than 186,000 followers on Twitter. His tweet was shared nearly two dozen times.

A word that never saw the light of the day in my blended military family. https://t.co/Yc0pIyktD9

I just checked my son's ID Card he got a couple weeks ago. It doesn't say "Legitimate Child" on it. Not sure why yours says "Stepchild." I agree with you ... #notcool. https://t.co/KeIxiGuhyE

“This sucks, and it sucks more for ‘adopted child,’” wrote @LethalityJane, a soldier with some 28,000 followers, in a retweet shared more than 80 times. “No one who is inspecting my stepkid’s ID needs to know why she qualifies for my benefits.”

Army spouse Kristen Bates at Fort Bliss, Texas, originally shared the photo online after receiving it from a close friend and Army spouse in Hawaii who was in disbelief after getting her child a new ID.

Bates first shared it to an Army officers’ spouses page to see if she and her friend were the only ones bothered by it — and to see if it could be changed.

In a Twitter post that was shared less widely, Bates said she had received a response from a Defense Department office explaining the inclusion of the term “stepchild” was an oversight when the new ID card was rolled out, and that officials were looking into the possibility of fixing it.

The previous ID cards listed the relationship as “SC,” but the new one allows the whole term to be spelled out more prominently, said the email, which Bates shared with Stars and Stripes after tweeting it from her account @kristenmary20.

“This is an error of omission vice commission,” it said. “There was not a conscious decision made during the implementation of this major change to DoD’s ID card program to bring emotional distress to any DoD ID card recipient.”

The email added that ID cards for adopted children list the relationship as “child.”

The reason for the difference appears to be a result of how the child’s status is listed in DEERS. A stepchild’s eligibility for DOD affiliation and benefits is based on their biological parent’s marriage to the military sponsor and ends upon a divorce. But adopted children maintain their benefits through age 21, regardless of the relationship status of their parents, the email explained.

“The DOD is reviewing this issue to determine whether this issue can be resolved, i.e., continue to reflect the stepchild status in DEERS while printing CHILD on the face of the ID card, and if so, the associated timeline,” said the email Bates received.

The military did not immediately confirm the authenticity of the email to Stars and Stripes or provide additional comment Thursday.

While DEERS lists a remarried soldier’s partner as a second spouse, Bates said she confirmed that the new IDs will just say “spouse.” She was disappointed that it wasn’t clear whether the change for dependent children would be made.

For the self-described “Air Force brat … now tied to this Army life,” it’s an unnecessary label to place at the top of the ID.

“It’s not what should define her,” she said of her daughter, who was 4 when Bates married the soldier the girl now calls “Dad” and has watched deploy three times.

“We have our own unique family,” she said. “It’s not cookie-cutter. We’re not all the same … [but] we are one family.”