SURFSIDE, Fla. (Tribune News Service) — It’s been six days since authorities found the body of Maria Gabriela Camou in the rubble of the Surfside condo collapse, but her family says funeral plans must wait until the search crew finds her husband of 40 years, Miguel Kaufman.

“We thought the next day they would find Miguel,” said Maria Ines Camous, whose sister died in the collapse. “God willing, soon. I thought it would be immediately.”

Standing in front of a makeshift memorial set up for her sister and playing “Ave Maria” from one of their cellphones, Maria Ines and her brother Bernardo Camou said they traveled from Uruguay to be with their nephews and to tend to the memorial on Harding Avenue a block away from where the Champlain Towers South Condo once stood.

With obligations back home, they said they must return to Uruguay soon, with or without official word about their brother-in-law.

As search teams began their 21st day looking for victims of the Surfside building collapse — and the process of identifying bodies has grown more challenging — some families are still waiting to be reunited with their loved ones even as the search-and-recovery effort appears to be approaching its final stages.

At least 96 people died in the collapse, Miami-Dade Police said Wednesday after identifying an additional victim. A total of 11 people remain potentially unaccounted for in the collapse, a police spokesman said.

Miami-Dade Mayor Daniella Levine Cava had previously said there are people who are deceased who may be on the list of the missing but have not been identified yet. Luis Barth Tobar, 51, was identified Wednesday as an additional victim after his body was recovered Saturday.

Officials have cautioned that there’s no timeline for when the recovery effort is expected to conclude.

“It will conclude sooner than we expected,” Surfside Mayor Charles Burkett told the Miami Herald on Wednesday. “My hope and my most strident desire is that we can get everybody out.”

He said the process of identifying bodies recovered from the collapse is taking longer than it once did due to their degradation over time. Burkett said families still waiting to hear about their loved ones — like the family of Dr. Brad Cohen — have been texting him for updates but he must ask them to hold on just a little longer until the work is completed.

Soraya Cohen, whose husband is Brad Cohen, told the Miami Herald she is receiving “zero” information about Cohen.

Burkett said it is “heartbreaking” he does not have answers for Cohen’s 12-year-old daughter, Elisheva, who Burkett said he met the weekend after the tragedy praying at the collapse site.

“That is the cruelest irony that her dad is one of the last to be sort of found and identified after she’s at the site from the very beginning saying prayers.” Burkett said. “That’s heartbreaking to me. What’s further heartbreaking is that I can’t give her the answer that she wants.”

He said he has reminded families that search teams are working 24 hours a day to find their loved ones.

“My message to the families is the same that it was on day one: We will not stop working until we get everybody out of that pile of rubble and return them to their families,” he said. 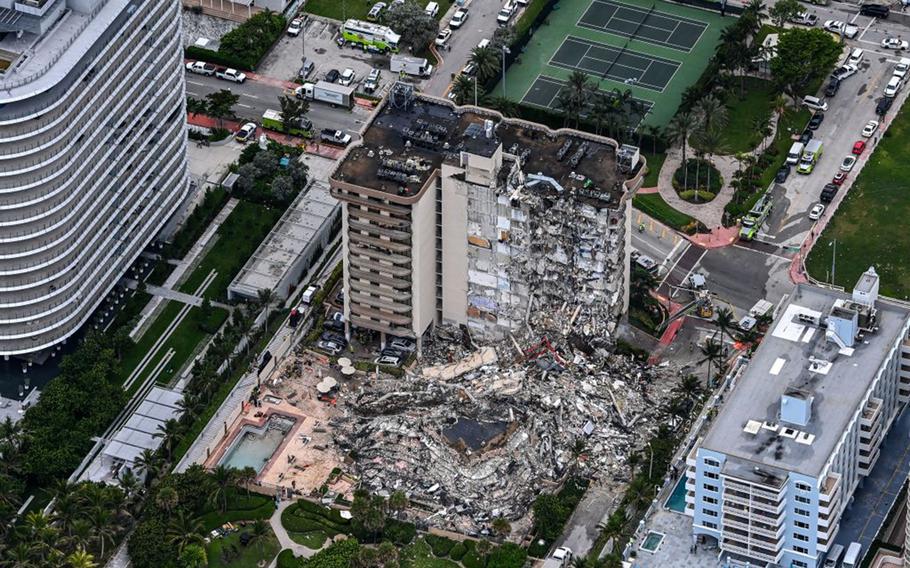 This aerial view shows search and rescue personnel working on site after the partial collapse of the Champlain Towers South in Surfside, north of Miami Beach, on June 24, 2021. (Chandan Khanna, AFP via Getty Images/TNS)