Charlottesville removes Confederate statue; a Florida county Commission may vote to keep theirs 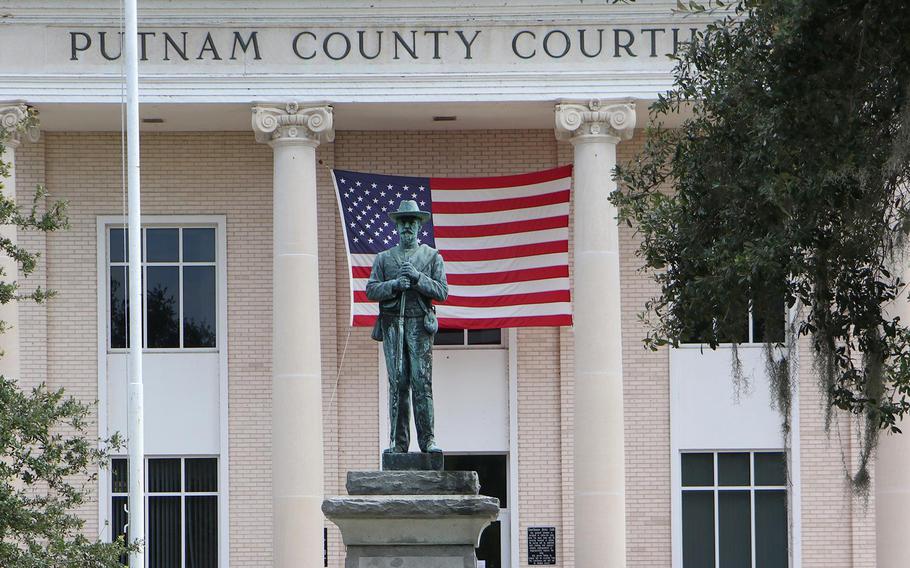 A bicyclist rides past the statue of a Confederate Civil War soldier on the grounds of the Putnam County Courthouse in Palatka. This week, the Putnam County Commission will consider an ordinance that would ban the removal of historical landmarks on public property, including the controversial Confederate monument. (David Tucker/Daytona Beach News-Journal)

PALATKA, Fla. (Tribune News Service) — A controversial Confederate monument that has sparked protests and counter-protests over the past four years on the grounds of the Putnam County Courthouse could become a protected landmark.

In a move that goes against trends in other communities, the Veterans Memorial Protection Ordinance will be presented to Putnam County Commissioners for a first reading at a workshop session on Tuesday. The workshop will occur only days after statues of Confederate leaders that sparked a deadly conflict four years ago in Charlottesville, Va., were removed in front of cheering onlookers.

In August 2017 scores of white nationalists descended on Charlottesville for a “Unite the Right” rally to protest the planned removal of a Robert E. Lee statue. When they were confronted by counter-protesters, a white supremacist drove into a crowd of peaceful demonstrators, killing a woman and injuring dozens.

The violence and open racism in Charlottesville yielded calls to remove Confederate statues across the country — including the tall statue of a Confederate soldier on the county courthouse grounds in Palatka.

Despite those protests, the statue in Palatka remains. The draft version of the new ordinance seems to assure that will continue to be the case.

It states that “a monument or memorial located on public property may not be relocated, removed, altered, renamed, rededicated, or otherwise disturbed.” The ordinance doesn’t prohibit county staff from temporarily removing a plaque, sign or memorial for restoration, repairs or other maintenance.

If the first reading of the ordinance is approved on Tuesday, it’s slated for a second reading in August.

Erected in 1924 by the Patton Anderson Chapter of the United Daughters of the Confederacy, the courthouse statue’s defining element is a Rebel soldier, standing about 20 feet tall, high enough to be spied a block away. By comparison, marble headstone memorials in the city to fallen soldiers in World War I, World War II, the Korean War, Vietnam and Desert Storm hardly catch the eye.

In addition to the sculpture of the nameless soldier, the statue features inscriptions on its four-sided base, including the following sentiments on the front of the monument, beneath a trio of Confederate flags: “Although the flag they died to save floats not o’er any land or sea throughout eternal years shall wave the banner of their chivalry.”

In Putnam County, the fate of the courthouse statue has been a topic of debate for years. Residents and elected officials offered passionate comments in favor of and against the statue in marathon Commission workshops and meetings that lasted for hours.

In August 2020, the commission voted 4-1 in favor of relocating the monument to a yet-to-be-determined location, with costs to be paid by private funds raised by individuals or groups that support the move.

But on Monday, Commission Chair Larry Harvey said that residents advocating for the statue’s removal never reported to the commission that any money had been raised. He also said that the ordinance isn’t specifically related to the courthouse statue.

“It’s broader,” Harvey said. “It’s not just about one issue. It’s about protecting taxpayers interests in Putnam County. They spend money on these government buildings and we want to make sure they are protected.

“This ordinance is a matter of putting some teeth in a policy,” Harvey said. “Our property is our property and it should be protected. It’s the taxpayers’ property.”

The statue debate in Putnam County has unfolded against a backdrop that reflects the demographic differences between the city of Palatka and the county beyond its borders.

In Palatka, the city’s population of 10,451, according to the most recent Census data, is fairly evenly divided racially. The town is 53.5% white and 42.3% Black, according to Census figures. The five-member City Commission, including the mayor, is all Black.

In Putnam County as a whole, however, the population of 74,521 is 80.3% white and 16.4% Black, according to Census figures. The five-member Board of County Commissioners is all white.

Palatka Mayor Terrill Hill has been among those advocating for the removal of the statue, calling it a landmark that “impedes the steps to justice with a symbol of hate.”

On Monday, Hill reacted with disappointment to the proposed ordinance.

“Our county leadership continues to support and protect remnants of slavery that impede the walk to justice, while other communities are removing them nationwide,” he said. “There is a clear message that divisive objects will be protected and not people.”

The statue controversy in Putnam County and Palatka continues in the wake of moves to remove other Confederate monuments both in Florida and nationwide.

In July 2020, a statue of Gen. Stonewall Jackson was removed from famed Monument Avenue in Richmond, Va., after the mayor ordered the removal of all Confederate statues from city land.

Also, a little over a year ago, St. Augustine city officials voted to remove a Confederate memorial placed in the Plaza de la Constitucion in the late 1800s to honor local men who died serving the Confederacy.

“This seems to be going in the opposite direction of the trend,” said Leonard Lempel, professor emeritus of history at Daytona State College. “Even in most southern communities, they are moving towards getting rid of these statues, not preserving them.

“Putting this in historical context, these monuments were put up at a time when slavery was seen as a benign institution during a period when Blacks were considered biologically inferior to whites, and White Supremacy was the rule of the land,” Lempel said. “That’s just not the case any more, and thankfully so.”

Harvey said that he wasn’t aware of the removal of the Confederate statues over the weekend in Charlottesville.

“I haven’t heard a thing about that,” Harvey said. “I’ve been taking care of county business. Whatever other counties or states do is irrelevant to that.”