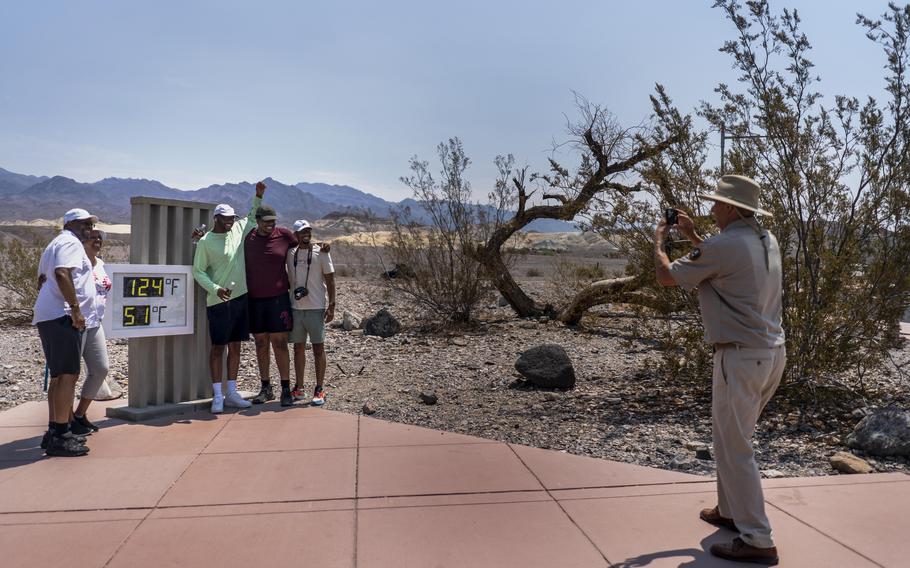 The reading had just hit 135 degrees - the highest temperature the thermometer had ever recorded - though a separate and more accurate National Weather Service sensor was still stuck at a mere 129 degrees, short of a record.

"The hottest day in the recorded history of mankind," marveled Steve Forsell, 71, of Santa Barbara, who said he had been monitoring forecasts for years hoping to be present for this moment.

"It's a world record!" said Forsell's wife, Mary, who went so far as to crack an egg on the asphalt in the visitor center parking lot to see whether it would fry. (Park rangers made her clean it up just as the whites were starting to crisp, she said.)

Cellphones quickly get too hot to hold in this weather, then turn themselves off. So Bill Cadwallader, of Las Vegas, had been handing out bags of ice to prevent a meltdown at the moment of truth. He was there, he said, "just to say you did."

The excitement at Furnace Creek, while apparently misguided, nonetheless marked the epicenter of a massive heat wave scorching much of the western United States this weekend. This heat wave came on the heels of the unprecedented heat dome that smothered the Pacific Northwest and part of Canada less than two weeks ago, killing hundreds. The temperatures spur wildfires and exacerbate drought.

More than 30 million people were under excessive heat warnings and heat advisories Sunday, including most of interior California, much of Nevada, western Arizona and Utah, southeast Oregon and southern Idaho. 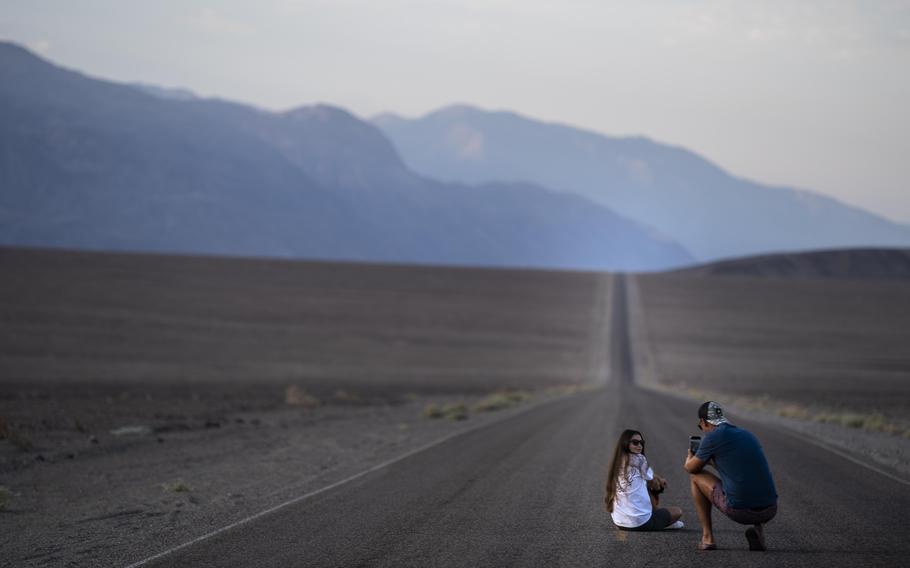 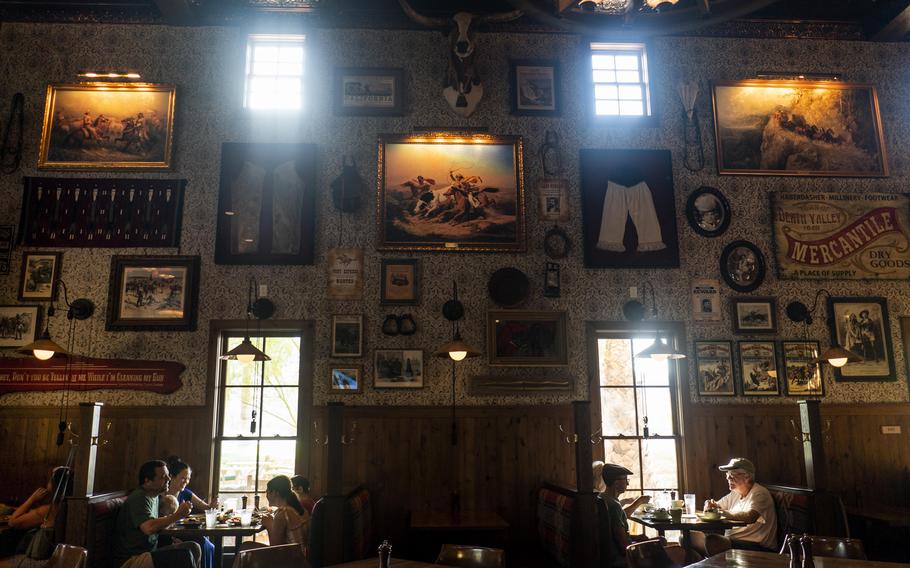 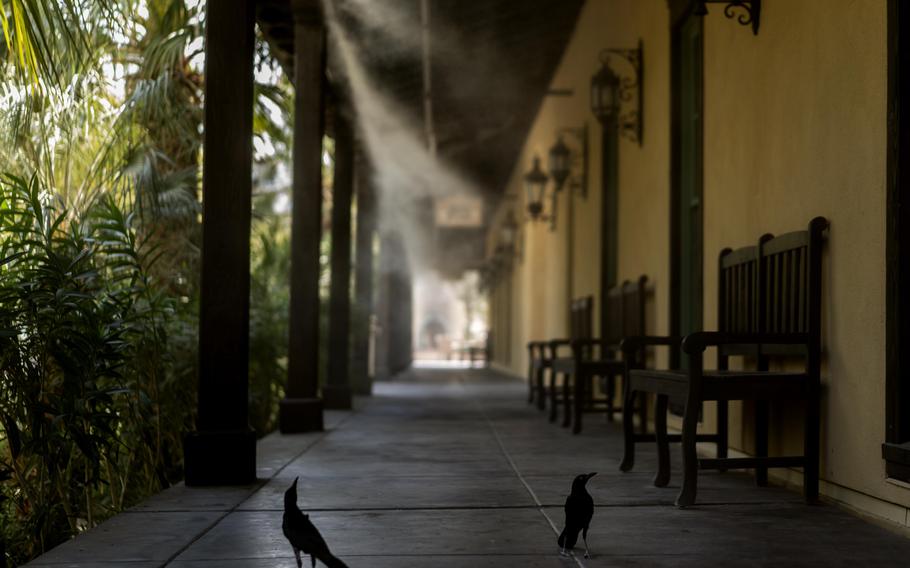 California's power regulator and Nevada Energy asked residents over the weekend to conserve energy by adjusting thermostats and reducing use of appliances in response to the blistering temperatures.

Extreme heat will continue in the region through Tuesday or Wednesday, though the intensity will slowly ease

"Despite the extraordinary heat, this will be one of the coolest summers for the rest of our lives, if not the coolest," Kalmus said, expressing views he described as his own and not necessarily shared by the agency.

When temperatures get this high, it feels like that blast when you open a hot oven — except it never stops. It feels like blow-drying your face instead of the back of your head - except you can't turn it off.

The heat is so intense that it almost defies description, as though the adjectives themselves have perished from heat exhaustion. Cold water faucets can't produce cold water, and steering wheels are too hot to touch. The occasional gust of wind brings no relief, just swirling the sizzling air around.

These brutal conditions attract "heat tourists" who show up every summer in Death Valley to experience and chronicle extraordinarily high temperatures in one of the least hospitable places in the world. A sere moonscape of rock, sand and mountains, portions of the park lie 282 feet below sea level, the lowest point in North America. Shaped like a large V, the valley draws heat in and traps it.

"If you spend more than 15 minutes outside, you can feel it," said Patrick Taylor, chief of interpretation and education for Death Valley National Park. "Your heart rate goes up a lot. Sometimes it gets so hot, you can't feel yourself sweat."

Taylor is spending his eighth summer at the park, including an earlier stint from 2009 to 2013. Temperatures have definitely gotten higher over the years, he said, and the park has experienced long periods where nighttime temperatures never fall below 100 degrees - episodes that keep getting longer.

The heat tourists are more interested in the daytime highs, which are projected to approach 130 degrees through Monday. Saturday was forecast to be the hottest day of the weekend, topping out at 132 degrees Fahrenheit. That would have bested the modern-day record of 130 degrees set here last August and then unexpectedly attained again on Friday. (Neither temperature has yet been officially verified by the National Weather Service.)

At 130 degrees, you could cook a beef roast, serve hot vegetables, keep food warm in a steam tray. According to the Old Farmer's Almanac: "At 130 degrees F the survival time of a human being begins to decrease drastically. The actual temperature at which someone might die, however, can vary."

Had Saturday's forecast been achieved, 132 degrees would have would have been the highest temperature credibly recorded anywhere on Earth. Slightly higher temperatures - including 134 degrees recorded here in 1913 - have been challenged by scientists, although the National Weather Service stands by them.

But the big digital National Park Service thermometer that caused so much excitement sits in intense sunlight, while the National Weather Service draws its official readings from a shaded sensor with more complex instrumentation. By 5 p.m. Saturday, that sensor had peaked at 129.4 degrees - a touch lower than the record.

That didn't dampen the spirits of the sweating and excited heat tourists.

"A person can go for a record any time they want to," said Billyjack Jory, a geology undergraduate student at the University of California at Santa Barbara. "But to see the Earth going for a record - it's a sight to behold."

"I can't believe this - how wonderful," said Art Mansbach, of Cleveland, a retired teacher.

Up until the coronavirus pandemic hit, visitors from Europe came by the busload in the summer months, filling the local Oasis Inn to capacity. This summer, the inn is closed, leaving a connected and more modest ranch-style inn to do a brisk business this weekend. Everyone expects the European tourists eventually to return, though not everyone understands the appeal.

"I absolutely have no idea what motivates them, I'm going to be honest. I'm trying to stay cool," said Inyo County Supervisor Matt Kingsley, who represents the area. "Maybe a psychiatrist would be better suited."

Kingsley said he was once in Death Valley when the visitor center thermometer stood at 130 degrees. He recalled encountering some individuals who were "just very odd."

"There was a guy in an all-black jumpsuit running around outside and then other people who were walking, and there were people taking pictures in front of the thermometer," Kingsley said. "I guess maybe the best way to say it is, it's an interesting phenomenon that I don't think there's that many people are familiar with."

While some humans celebrate the high temperatures, they are starting to threaten the plants and animals that live in Death Valley, as trees such as the ancient bristlecone pine stand on the brink of survival, Taylor said. He and other Park Service employees tell anecdotal reports of birds falling from the sky because they can't take it.

The Washington Post's Jason Samenow contributed to this report.