by
Jasmine Hilton and Ellie Silverman
• The Washington Post • July 10, 2021 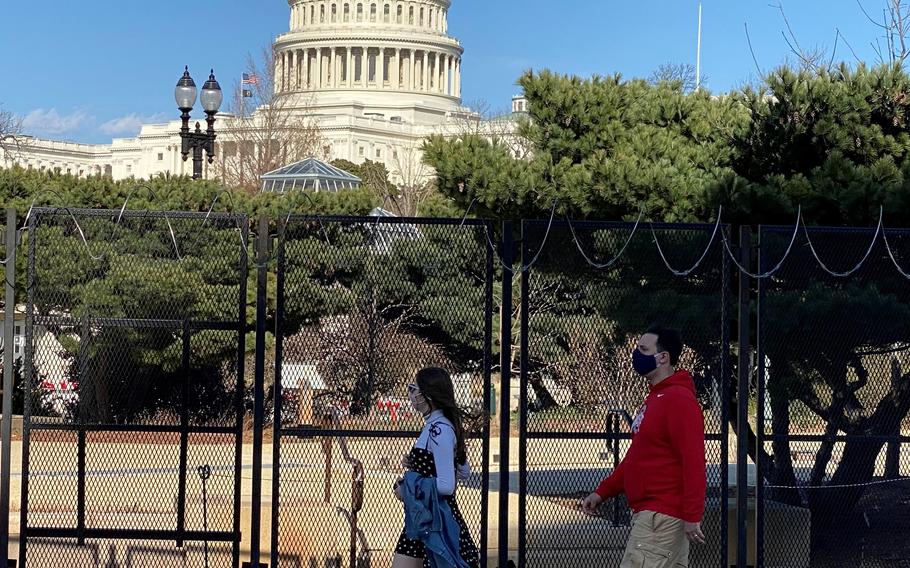 WASHINGTON — The metal fencing and concrete barriers that encircled the Capitol after a mob of Trump supporters stormed the complex on Jan. 6. gave way Saturday to an open plaza filled with families lounging on picnic blankets, dogs on leashes and visitors in sunglasses and hats.

The sidewalks where soldiers once stood holding their guns in protection of the complex now filled with walkers with strollers and bike riders.

Children ran and chased each other across the lawns leading up to the steps that were taken over by rioters six months before. Groups of families huddled close together for photos in front of the landmark building.

Heazel Trimer, 45, from North Carolina, stood along a pathway facing the Capitol as her daughter Sophia, 11, walked ahead of her.

Trimer stopped and looked back at the tall, white pillared building.

Crews began taking down pieces of the fencing early Friday evening. More barriers were piled onto trucks and forklifted away Saturday morning.

The perimeter had become one of the last remaining symbols of the failed security response to the riots that disrupted Congress from confirming President Joe Biden's election victory and led to the deaths of five people. The fencing had also become a political flash point in recent months, with officials denouncing permanent enclosures that would restrict public access to the building that previously had about 2.5 million visitors per year.

"The Capitol grounds were meant to be used as a park, a place for sledding, a place to come and enjoy the open air, and we want it to return to that use," said Eleanor Holmes Norton, a Democrat, the District of Columbia's nonvoting delegate in the House who has been trying to get the fence taken down.

On Friday, workers in bright neon vests plugged away from row to row, some standing atop concrete barriers to balance themselves as they drilled at the bolts holding the fence together.

The sun peaked from beneath the clouds after rain halted their progress, but it didn't stop workers for long. As they made their way around the northern perimeter on New Jersey and Constitution avenues, a truck with yellow flashing lights and a Capitol Police escort followed alongside them. Bystanders looked on and snapped photos.

The next day, with the barriers gone, people filled the Capitol grounds.

Emily Durham, 22, and Colleen Calhoun, 23, both residents of the District, said that they heard the fences were coming down and knew they had to stop by.

Durham said that while she did want the fence up for protection and security, the sight of it on her walks made her sad.

"Now that it's down and we're able to walk around this beautiful day . . . it almost feels like normal again," Durham said as she tugged at the leash of Harris, a black dog named after the vice president.

So far, more than 500 people have been charged with federal crimes in the attack, when some Trump supporters brawled with police, broke windows and endangered lawmakers.

The House narrowly approved a $1.9 billion security bill in May that includes strengthening the Capitol building with reinforced windows and doors and additional surveillance, among other measures. The legislation now faces an uphill battle for Senate approval.

All of the fencing was expected to be removed within three days and the Architect of the Capitol can "expeditiously reinstall the temporary fencing should conditions warrant," according to a memo sent to lawmakers Wednesday. Capitol Police will continue to monitor threats and the Capitol will still remain closed to public visitors, according to the memo.

The fencing has been scaled down significantly since the riot's immediate aftermath, when the razor-wire enclosure circled the Capitol, Supreme Court and federal buildings and soldiers in fatigues monitored checkpoints. This spring, that enforcement shrank to securing just the dome. But 12 days after the road near the Capitol reopened in April, a car plowed into two Capitol Police officers, killing William Evans, a father of two and an 18-year veteran of the department. The driver was fatally shot.

The second deadly attack at the Capitol in less than three months since the riot and after a year of widespread protests throughout the District sparked additional debate on how to defend the nation's capital.

Residents of Capitol Hill have expressed concern for months with the fortification of their neighborhood and the restrictions to the Capitol.

"Part of what's beautiful about our Capitol, and what's very different than capitols around the world, is that we do have this access. It's not closed off, it's intended for every citizen to have access to it," said Allison Cunningham, 37, a longtime resident of Capitol Hill.

Cunningham started a petition against the fence as soon as she heard of the proposal for making it permanent by the Capitol Police's acting chief, Yogananda D. Pittman, at the end of January. Garnering over 34,000 signatures from across the region and country, Cunningham said she heard from other neighbors who wanted to work together to find better security solutions, which led to the creation of their community-based group, Don't Fence the Capitol.

Cunningham said the fence not only took away from people's everyday lives and routines like walking their dogs and riding bikes, but also served as a "painful reminder" of the Jan. 6 insurrection.

Members of Don't Fence the Capitol arrived to the complex Saturday morning, setting up their red wagon on the East side and passing out doughnuts with a smile to passersby. The day had finally come when they could return to the place they called "our backyard."

Gabrielle Doyle, 58 and a resident of Capitol Hill, still remembers hearing the sounds from her home of rioters charging the Capitol on Jan. 6.

One call after another, friends and family phoned her from her homeland of Ireland and from Canada, where she once lived, asking her if she was okay and checking on her safety.

"They were all watching, they were all shocked. . . . Everybody saw as it happened," Doyle said.

Then, the fence was put up.

The once daily routine of walking the grounds was stripped away and the ease of getting around the Capitol, and walking toward the National Mall, was two miles longer, Doyle said.

"The fence changed everything about our sense of life here," she said. "To enjoy the place that we lived, we had to walk around barbed wire . . . and soldiers."

Standing alongside neighbors and volunteers Saturday as she handed out doughnuts, Melanie Horne, 29, said it was "a silver lining" to be at the Capitol once again, opening just in time before her deployment out of the country for a year in her role in emergency humanitarian assistance.

Horne said the community organization understands that the day was also "bittersweet" for those who felt more secure with the fence, but said there are other thoughtful solutions including more funding for U.S. Capitol Police.

Now able to resume her daily walks, Doyle said she's headed to her favorite spot, one she hasn't been to "in so long."

A tree that was planted in 1920, the year her mother was born, a reminder of her.