Families gathered in chairs and on blankets along the ground. Few masks were in sight, but social distancing was still being adhered to as each group stayed a healthy 6 feet from each other.

There was no music, just bangs and whizzes as each mortar flew up into the sky. As the first few fireworks went off, a couple children running on the field let out a couple shrieks. Brocades, chrysanthemums, peonies, strobes, as well as other firework shapes, in various colors, lit up for nearly 20 minutes.

There were not one but three displays that were at a scale that could be considered the finale, leading to the audience clapping before more fireworks would go off.

But the fireworks lighting up Fort Meade’s sky were not just because the commander’s family enjoys them. The scaled-down July 4 celebration was one way to thank the installation’s community for adhering to regulations in place since March 2020, Nyland said.

Usually the celebrations would be open to the general public, not just Department of Defense employees and their guests. There would also be food and pre-fireworks activities.

With COVID-19 cases dropping in the area, the garrison could at least provide fireworks, Nyland said.

The July 4 holiday rings differently for Nyland as a service member, he said. It’s the start of the experiment that is the United States and causes him to reflect on where the country started and where it is now.

But he also thinks about the oath that he has taken as a member of the Army.

Nyland has spent July 4 home and abroad. He spent three years with his family stationed in South Korea. Another three Independence Days were spent while deployed in combat zones.

“I will say the one of the things I absolutely love about being deployed or serving overseas, is that, in my experience, the military community that you’re deployed with or you’re serving overseas, with, generally, we always try to go over and above to recognize and celebrate the holidays, regardless of the holiday, because we understand everyone’s away from their friends and their blood, family,” Nyland said.

One year in Afghanistan, instead of fireworks, which they could not do, the service members used chem lights to do a light show.

Other places might have July 4 sheet cakes, ice sculptures or, in some cases, barbecues, said Master Sgt. WIlliam Blagmond, of the Headquarters and Headquarters Company.

While abroad, Blagmond would reflect on the holiday and think about his family and how they were celebrating. The holiday is about family for the master sergeant.

While he does see the holiday as a chance to celebrate the country’s independence and gives him a chance to reflect, as a father, the July 4 holiday also marks that the summer is almost reaching a halfway point.

Blagmond will be spending his July 4 holiday with his family. First, celebrating his older brother’s birthday on Saturday then a barbecue on Sunday. He is breaking out his new smoker, which took him three hours to preseason.

“But it’s preseasoned now, and it’s ready for some baby back ribs and some chicken wings and some brats,” he said.

Cpl. Luke Rodgers, with the 2nd Military Working Dog Detachment, also generally spends the holiday with his family, usually with a cookout. This year, he’ll celebrate with his wife since his family is in Virginia.

The holiday’s reflection is different for Rodgers after being in the service, he said. He sees the sacrifice men and women make for the country and its freedoms. That’s only amplified the reason he joined, he said, and makes him feel like he needs to do more.

“The whole reason I joined the military was just the patriotic feeling,” he said. “And I felt like I had almost a duty in a sense, or I was obliged to join because of every guy that fought before me for our independence. And I was like, ‘Well, I guess it’s my turn. Now I have to do my part, and fight for independence as well.’”

Blagmond and Nyland both shook their heads in agreement.

Nyland grew up in a military family and watched his father go to work in uniform. But it took him putting on his own uniform to truly understand what it means to serve.

As a 19-year-old, it is hard to understand service to the country or fighting for independence, Blagmond said.

“But as you get older, and we go through these holidays, Fourth of July is one of those ones that you really are proud of,” he said. “You’re proud to be an American, and we’re proud to celebrate our independence. And as the years go on, it gets more and more important to me.” 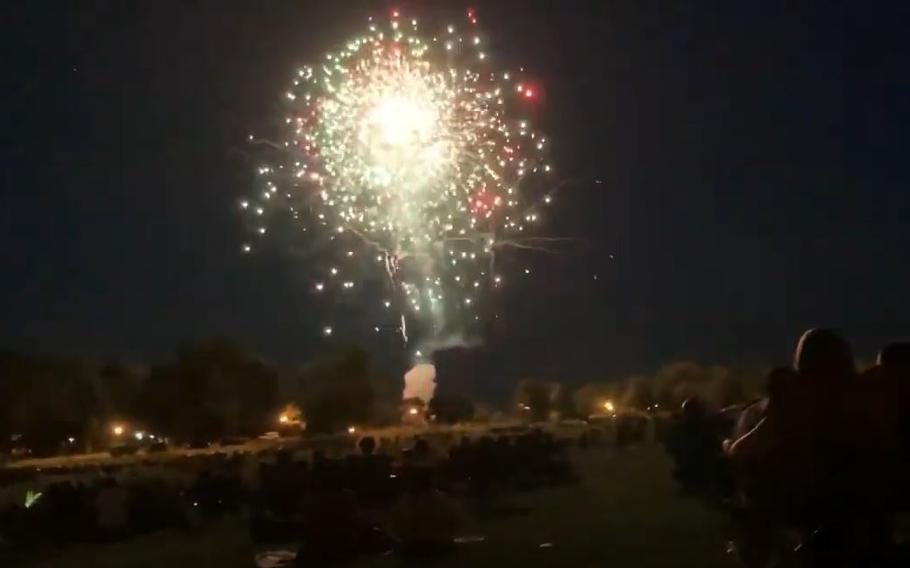