Craving freedom from virus, US heads into July 4 with sharply divided risk 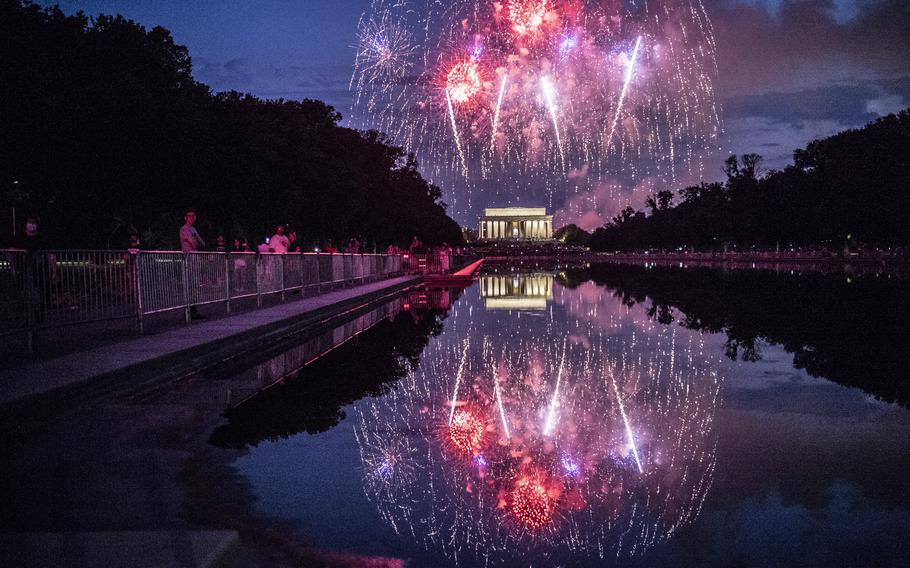 Buy Photo
Fireworks light up the sky over the Lincoln Memorial in Washington, D.C., on July 4, 2020. (Carlos Bongioanni/Stars and Stripes)

President Joe Biden has pointed to July 4 as the day when Americans can mark independence from the coronavirus. But the United States has not fully snuffed out the threat from the virus - particularly in places where vaccination rates are low - as the delta variant threatens to undo the nation's progress against it.

More than 2,000 counties representing over half of the American population have not met Biden's goal of 70 percent of adults receiving at least one dose of the coronavirus vaccine by Independence Day, according to an analysis by The Washington Post. Those counties are seeing steeper increases in new cases and double the rate of tests coming back positive compared with counties who have met the president's goal.

Most ominously, the highly transmissible delta variant is on the rise and represents a quarter of confirmed cases, posing a greater risk to pockets of unvaccinated communities than earlier strains of the virus. The White House launched a new initiative to respond to regional flare-ups ignited by delta, including in Mesa County, Colo., and a growing cluster along Missouri's borders with Oklahoma and Arkansas.

The United States reached a crossroads last July 4 when it confronted a surge in cases after Memorial Day and had an opportunity to quell additional outbreaks, prompting political leaders of both parties to plead for caution and warn that the school year and sports seasons were at risk. Cases instead rose.

Now the country is staring down two paths: deliver a finishing blow by achieving herd immunity through vaccination, or risk additional and preventable outbreaks from a virus that has grown more threatening. Sixty-four percent of Americans over 12 years old have received at least one vaccine dose, but new infections are starting to tick up again after a steady decline, with 25 states reporting higher seven-day averages and more cases likely undercounted because of lower testing. As of Thursday, 18 states reported increases in the seven-day average of hospitalized covid-19 patients.

"The overarching sense in America is that summer is here, the pandemic is over and the party can begin. But in undervaccinated areas, where ironically a lot of this rhetoric lives and breeds, that's the farthest thing from the truth," said Aditi Nerurkar, a global health specialist at Harvard Medical School.

"I worry that the July 4 weekend could become a superspreader event in low vaccinated areas without the necessary precautions," Nerurkar added, noting that eating and socializing without masks in those places could create a "petri dish for a brewing delta surge."

Most Americans appear to think differently.

AAA projects more than 47 million Americans flying and driving over the holiday weekend, a 40 percent increase from last year and on par with 2019. The Transportation Security Administration recorded more people checking into flights Thursday than the same day in 2019.

The Centers for Disease Control and Prevention Director Rochelle Walensky then urged unvaccinated Americans to wear masks and to practice social distancing. Her agency has identified about 1,000 counties where fewer than 30 percent of residents are fully vaccinated.

Public health officials in some of those areas have resigned themselves to the fact that residents have made up their minds - and some are fine with the risk of contracting the virus.

"People are not responding to the uptick by going to get vaccinated," said Denise Burley, health director of Mohave County, Ariz., where under a third of residents are fully vaccinated and about 15% of recent test results are positive - a sign that even more infections are going undetected.

She suspects a mix of low vaccination rates and a summer tourism season that draws people to go boating on Lake Mead and tubing on the Colorado River are to blame. On Thursday, she issued a news release warning residents that delta cases have been detected in the county.

"What we are seeing is the greatest increase in the 20 to 44 population and of course many of those people are healthy and feel they don't necessarily need the vaccination because they can contract the virus and get sick and recover," Burley said. "There's no real sense of urgency."

While at lower risk for severe covid-19 complications, young adults are far from immune.

A delta-fueled spike in Missouri, which reported among the nation's highest per capita new cases in recent weeks, appears to be spilling over its borders into northeast Oklahoma and northwest Arkansas.

A coalition of Northwest Arkansas hospitals raised alarms Thursday after recording its 41st covid-19 admission - an exponential rise surpassing the last peak in February. The group noted nearly all of the patients are unvaccinated and skew younger in a state where just over a third of the population is immunized. Physicians say delta cases are driving this uptick, but some samples will take up to a month for confirmation, a coalition spokeswoman said.

"We are continuing to see a trend of very sick covid-19 patients with a larger percentage of those covid-19 patients requiring critical care, on top of a pretty significant increase in critically ill patients overall," said Larry Shackelford, president and CEO of Washington Regional Medical Center in Fayetteville, Ark., in a statement.

Sparsely vaccinated Ottawa County, Okla., in the state's the far northeast corner, has reported Oklahoma's largest per capita case increase and a 23% test positivity rate that suggests the true toll is even higher.

Health officials are trying to ramp up genetic sequencing to better understand the role delta is playing and are closely monitoring the trajectory of the virus for a post-holiday bump.

"Covid was here in Oklahoma, at least the initial strain, the last Fourth of July and we did see a slight increase in cases after that and potentially we could see that again," said Jolianne Stone, Oklahoma's state epidemiologist. "However, this Fourth of July, we do have the luxury of having vaccination available and hopefully that will help mitigate and stop the spread of severe disease like we saw before vaccination."

Even highly vaccinated communities are vigilant against the rise of delta because of neighborhoods and demographic groups, often young, of color or politically conservative, with below average immunization rates.

Los Angeles County, where 60 percent of eligible residents are fully vaccinated, cited the potential for spikes among 4 million ineligible and unvaccinated individuals in its recommendation that vaccinated people wear masks indoors again.

Nevada has risen to the top of the list of states with the most per capita new cases and has seen its positivity rate creep above the 5 percent threshold set by the World Health Organization as a sign of a pandemic coming under control.

Democratic Gov. Steve Sisolak this week announced that his administration would ramp up efforts to increase vaccinations, deploying mobile units to neighborhoods with below average rates. He previously announced weekly raffles with $5 million in prizes, including a $1 million grand prize, for residents who received at least one dose.

Clark County, home of Las Vegas, has been driving much of this uptick as its iconic casinos and clubs fully reopen and tourism roars back. The Las Vegas Review Journal reported that the July 4 weekend is shaping up to be one of the city's biggest ever celebrations.

Cassius Lockett, Clark County director of disease surveillance and control, said 46% of eligible residents are fully vaccinated. Officials have zeroed in on nine Zip codes that range from within the city of Las Vegas to more rural corners with lower vaccination rates and disproportionate cases for additional outreach. The sharpest increases are among adults between the ages of 18 and 29, prompting new vaccination campaigns at the College of Southern Nevada and in high school summer sessions.

"We may all have a little bit of pandemic fatigue, and some people also have prevention fatigue with all these ways to keep ourselves safe," Lockett said. "Some of our campaign is shifting to if you are not doing it for you, do it for someone else, do it for a friend who may have an underlying health condition."

Health officials are racing to contain the spread with vaccinations because of the danger posed by more transmissible strains.

Delta made up 46% of the samples reviewed by the Nevada State Public Health Laboratory in the two weeks leading up to June 28, up from 16% in the two weeks ending June 18. A population split among the protected and the unprotected carrying on like normal creates dangerous conditions for the virus's spread, officials say.

"You are putting a strain on the species and what's going to come out of it are the Olympians," said Mark Pandori, the lab's director and a professor at the University of Nevada's Reno School of Medicine.

He's among the public health authorities fearing the delta variant will morph into something worse as it incubates and spreads. His lab has already detected three cases of the variant known as delta plus, which has an additional mutation that scientists are studying for signs of being even more transmissible or dangerous.

"Wearing a mask will become an inevitability for everybody if we continue to allow this virus to circulate in human beings," Pandori said.

Visitors returning to Las Vegas this week are finding normalcy and pre-pandemic fun.

Mask regulations have been lifted. The plastic barriers that once separated gamblers at bars and tables have been removed. Buffets have reopened and shows, concerts and residencies are coming back.

Cirque du Soleil declared that #IntermissionIsOver and is reopening two Las Vegas shows this weekend with others soon to follow. Allegiant Stadium, home of the Las Vegas Raiders, which has yet to host a major event, is expecting tens of thousands of music fans for the electronic dance music DJ Illenium.

Bruno Mars will be the first headliner to return to the stage at Park MGM with weekend shows, while Miley Cyrus is headlining the July 4 grand opening celebration of the new Resorts World Las Vegas casino.

Masks seem to be an afterthought on the Las Vegas Strip.

Friends Eileen Ovich, 62, a lifestyle director, and Rose Minelli traveled from Chicago to celebrate a relative's birthday and watch a friend's daughter play in a volleyball tournament. Both are fully vaccinated and said they feel comfortable taking in the sights without a mask.

"I was in a crowded elevator and I thought maybe I should have my mask on," Ovich said. "I have it with me."

"I got vaccinated. I'm not concerned at all," she said, even though she doesn't think the pandemic is over. "I feel this delta variant could even blossom into something worse, so I wish people would get vaccinated. But right now I'm not concerned. We just have to go out and have some fun now in case we get locked down again."

The Washington Post's Jacqueline D. Dupree contributed to this report.