In some parts of the world with more coronavirus vaccine doses than willing takers, attention-grabbing incentives have begun to catch on. Among them: the chance to win big.

Other countries have begun to follow suit. Two provinces in Canada announced lotteries with hefty cash prizes this month. Moscow is raffling off five cars a week to vaccinated residents. Hong Kong residents who get the shots are eligible to win a luxury apartment or airline tickets.

Vaccine doses remain scarce in many parts of the world. But in the few countries with abundant doses, lottery proponents say the hope to receive eye-popping prizes could propel the vaccine hesitant to roll up their sleeves. It’s a gamble at the intersection of behavioral economics and public health: the idea that an opportunity to roll the dice could drive healthy behavior — potentially more effectively than more equitable incentives could.

Many public health experts champion the approach, and they say there’s precedent for at least some short-term success around the world.

In 1957, Glasgow, Scotland, held a five-week anti-tuberculosis X-ray campaign. The city aimed to screen 250,000 people. “Every kind of propaganda is used to bring in the laggards,” including signs, slogans, fliers — and entry into a drawing for a new car, a newsreel recounted at the time. More than 700,000 people signed up to be screened.

Assessing the landscape of HIV-prevention strategies in sub-Saharan Africa in 2010, four researchers realized that few interventions had shown a significant effect on HIV incidence. Cash transfers conditioned on participation in health programs were already widespread, so the group looked for innovative and cost-effective ways to persuade people to practice safe sex. They decided on a lottery drawing every four months in Lesotho.

Funded by the World Bank, the study made individuals eligible for a local lottery to win either $50 or $100 if they tested negative for treatable sexually transmitted infections.

After two years, the group found a 21.4 percent reduction in HIV incidence relative to the study’s control group following the lottery intervention.

The researchers found that “risk-loving” people were more likely to take gambles with their sexual health and be more attracted to lotteries. “It ended up that the lottery program really made the risk-loving people behave like risk-averse people,” said economist Martina Björkman Nyqvist, a co-author of the study.

A similar study in rural South Africa found that lottery incentives shortened the median time it took HIV-positive men to initiate antiretroviral therapy, but it had an inconclusive effect on viral suppression at the end of the study.

And “Quit and Win” contests, popularized in the 1980s and ‘90s and tried in more than 80 countries, have offered incentives to smokers who quit the habit — with mixed results.

Damien de Walque, a lead economist in the World Bank’s Development Research Group who worked on the Lesotho study, said lotteries can be effective because humans have a psychological tendency to overestimate small probabilities. Risk-loving people often prefer a high-value prize with a small likelihood of winning to the certainty of receiving a low-value prize.

Widely publicizing the winners can amplify this effect by triggering people’s aversion to loss, said Emily Largent, a professor of medical ethics and health policy at the University of Pennsylvania’s medical school.

Canadian officials in some provinces are banking on that effect. This month, Manitoba launched a lottery that automatically enrolls those who have been vaccinated and will give out nearly $2 million Canadian dollars in cash and scholarships over the summer to encourage residents to get both doses. Alberta quickly followed in a quest to reach a 70 percent threshold of residents who have received their first vaccine dose and to lift public health restrictions. The top prize: $1 million Canadian dollars — about $800,000 U.S. dollars.

Public health and advertising experts in Australia are pushing for the country to launch similar lotteries. Sanjaya Senanayake, an infectious-disease specialist at the Australian National University, said novel incentives are needed in Australia as it struggles to overcome widespread vaccine hesitancy. Only about 22 percent of Australians have received at least one dose of a coronavirus vaccine.

“Obviously, you’re appealing to people’s greed with a lottery,” Senanayake said. “So I think it’s very important if you’re doing something like this, that you’re making sure that the prerequisite is an ethical one. And in this case, it is.”

If vaccine lotteries prove successful, he said, they could be replicated to address other public health problems around the world. Lotteries — which require lower administrative costs — are cheaper than handing out small cash payments to everyone who gets a shot.

Still, both expense and optics could be limiting factors. U.S. states and Canadian provinces have faced backlash from critics who charge that there are better uses of public funds. In places more strapped for cash, lotteries may prove more difficult to justify, Largent said.

Some ethical concerns remain. In the United States, vaccine lotteries have triggered fears of a relapse among recovering gambling addicts. The World Health Organization labels gambling an addictive behavior and warns that “harms caused by the gambling are significant.” About 350 million gamblers around the world display “problematic” patterns each year, according to the WHO.

Some also worry that incentive programs may distract from efforts to close persistent “information gaps” and to persuade people to accept getting vaccinated for the sake of personal and public health, rather than for the tantalizing prospect of cash rewards.

Lotteries won’t fix logistical problems, such as finding transportation to vaccination sites, Largent said. Nor are they likely to persuade those who are skeptical about vaccines that were developed and given the green light in record time.

“We have to be very mindful of the limitations of incentive programs like this,” Largent said. “In the United States — and I assume internationally — there are a lot of reasons why people aren’t being vaccinated right now, and an incentive is not going to address all those concerns.”

Nonetheless, she said, vaccine lotteries are worth a shot. “The sooner we can get people vaccinated, the better,” she said. 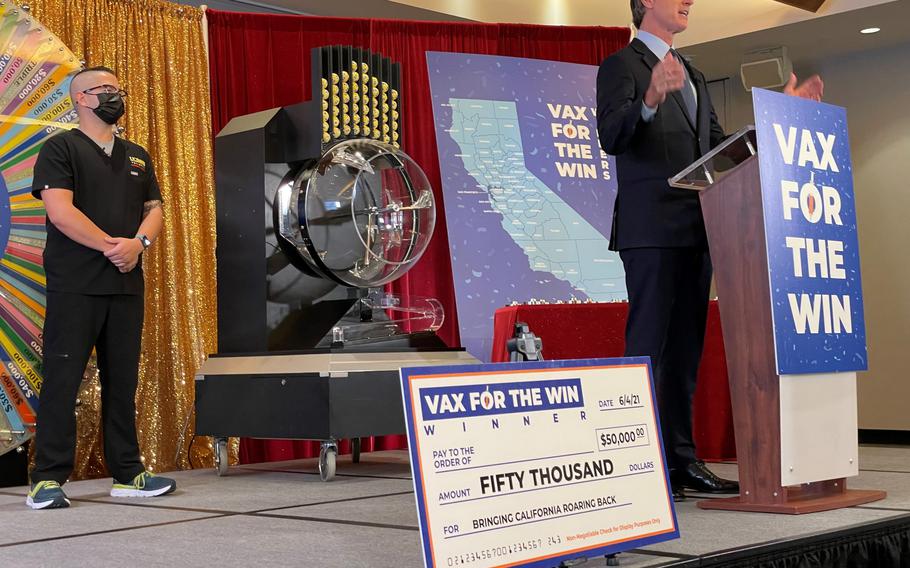