Millions of J&J COVID-19 shots expire soon, as states struggle to use them

by
Justine McDaniel and Erin McCarthy
• The Philadelphia Inquirer • June 19, 2021 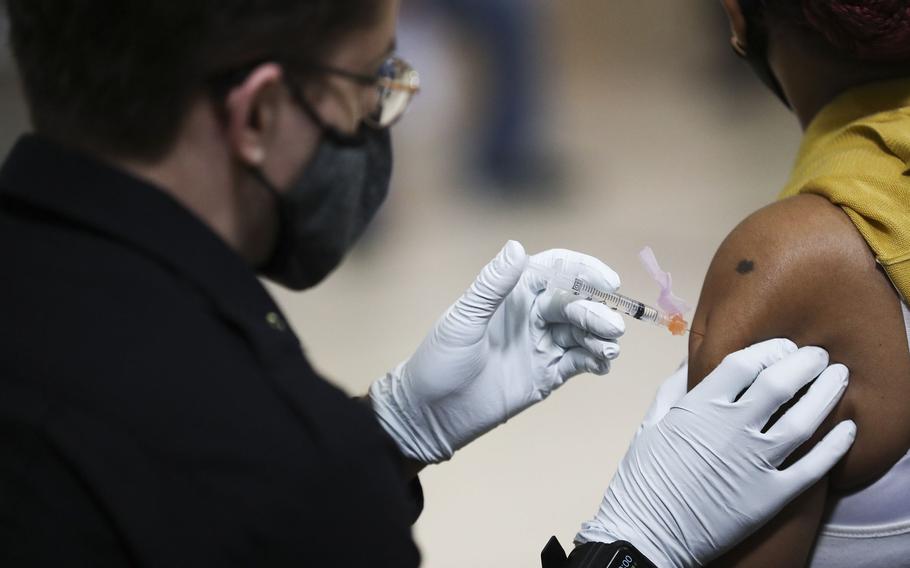 A person is administered a dose of the Johnson & Johnson COVID-19 vaccine at a city mass vaccination clinic at the Salvation Army at 55th and Market in West Philadelphia on March 26, 2021. (Heather Khalifa/The Philadelphia Inquirer/TNS)

PHILADELPHIA (Tribune News Service) — More than 800,000 Johnson & Johnson coronavirus vaccines in Pennsylvania, New Jersey and Delaware could go to waste this summer, as states across the country grapple with millions of time-sensitive doses of the less-popular vaccine.

Thanks to an FDA determination last week that extended the vaccine’s shelf life, states now have until early August to use doses that would have expired in late June, a date by which most of the vials in this region would almost certainly have gone unused.

But some states are still struggling to find enough takers for the vaccine, a task that falls to them in the absence of a federal plan to collect and redistribute extra doses.

Vaccine providers continue facing low domestic demand for J&J, which has been unpopular since the FDA halted its use for 11 days in April to investigate potential side effects that turned out to be exceedingly rare. The one-dose vaccine has accounted for only 5% of immunizations in Pennsylvania since May 1.

And providers can’t simply donate the doses to be used by countries who need the vaccine; the Centers for Disease Control and Prevention told states they can’t be distributed internationally. Montgomery County, for instance, tried to give doses to a provider who could have sent them abroad, but had to scuttle the plan after the CDC told Pennsylvania officials it wasn’t permissible, county and state spokespeople said.

The prospect of throwing away millions of shots is a staggering turnaround for the “one and done” vaccine, which was hailed at the height of U.S. vaccine demand as a key tool for speeding up immunization efforts and reaching vulnerable, isolated, or disadvantaged populations.

Instead, public perception of the vaccine never recovered after the pause.

Meanwhile, more than 153 million Americans, including more than 6 million Pennsylvanians, remain unvaccinated. The Biden administration has asked states to find ways to get unvaccinated residents to take the shots.

“What the state should be doing is maximizing output,” said Kevin Munoz, a White House spokesperson. “It’s all of our responsibility to work together to maximize the doses that [the states] ordered getting into arms.”

The administration is working with states to help them use the doses they have through efforts like targeted clinics and mobile vaccination units. Those are strategies that Pennsylvania, New Jersey, and Delaware are all undertaking.

Such efforts are important, particularly for immunizing harder-to-reach people, said Lawrence Ward, president of the Pennsylvania chapter of the American College of Physicians. He said bringing the shots to doctor’s offices, offering them to patients in hospitals, and incentivizing vaccine providers to seek out vulnerable populations are all strategies that could be ramped up to increase use of the Johnson & Johnson doses.

“We definitely have opportunity here at home” to use the vaccine before August, he said.

Health department spokespeople for all three states said they are continuing to offer the shots, assist providers, and support outreach efforts to persuade more residents to get vaccinated.

But efforts to connect residents with shots “are only as successful as demand for vaccine,” said Pennsylvania Department of Health spokesperson Mark O’Neill.

Yet Pennsylvania has no plans to offer incentives for vaccinations, he said — one of the things that could change demand. (In Philadelphia this week, a city clinic offering two Phillies tickets to anyone who got a shot drew nearly 570 people in one day.) Nor is the state health department planning to create a specific statewide strategy to use J&J this summer.

Health officials in the states and Philadelphia have consulted with the CDC, and a spokesperson for the Delaware Department of Health noted that state officials are on weekly calls with federal agencies where best practices and recommendations for dealing with expiring doses are shared.

Still, O’Neill said, noting that the problem is affecting states across the country, “any guidance or strategies the federal government can provide would be welcomed.”

The impending issue with the J&J supply has been clear for weeks, as demand slowed and expiration dates loomed. Nationwide, some 9.7 million J&J doses have been delivered to states but not used, and could go to waste if they aren’t administered within the coming weeks.

That would be “a really bad picture for the United States,” said Ward.

It would be “a total shame when much of the country still needs to get vaccinated,” he said, “and it looks terrible to the rest of the world, much of which would love to have access to those doses.”

The White House is sending 580 million new doses abroad, with shipments arriving this week in Mexico and Canada.

Sending states’ doses to other countries, however, would present major logistical and legal obstacles for the federal government, largely because regulators would need to ensure the doses hadn’t been tampered with, damaged, or left unrefrigerated. The Pennsylvania health departments confirmed that the CDC has said the shots can’t go international.

Because they are property of the U.S. government, they are currently only authorized for use by domestic vaccine providers enrolled through the CDC.

“I know local health officials would like to just say, ‘Oh, we can ship ours to Canada because they need doses,’ but that would not meet a product quality standard,” Munoz said.

Only 159,000 J&J doses have been given in Pennsylvania since May 1, compared to 2.9 million of Pfizer and Moderna. In the last month, for instance, Montgomery County clinics gave only 637 of the J&J shots, and Chester County administered 920 — a pace that would have to increase by more than nine times to use up Chester County’s remaining stash before Aug. 4.

The stockpiled doses belong to the federal government, which allocated them to the states. When they expire, providers have to follow specific procedures to dispose of the vaccines and report it to the state.

Some are hoping the FDA will extend the vaccines’ shelf life again after further study, Philadelphia health department spokesperson Jim Garrow noted; New Jersey providers have been instructed not to destroy expired doses in case that happens.

Pennsylvania is “coordinating opportunities” to possibly send vaccine to other states, and the Department of Health has recommended that hospitals offer J&J shots to every patient. The health department has said providers with expiring doses can contact the agency and “we will work with them to try to identify a strategy,” such as finding another provider who can use them.

But it’s not clear how successful that can be. One plan, coordinated with the state and CDC, for Bucks, Montgomery, Chester, and Delaware Counties to send shots to Oregon fell through after Oregon received shots more quickly from elsewhere.

Without higher demand or coordinated incentives drawing people to clinics, the hopes of finding in-state residents to take them could fall flat.

In Philadelphia, which distributes coronavirus vaccine independently from the state, the city still offers J&J shots. But Garrow noted whether the city can use up its doses depends not only on demand and clinics but also on incentives.

In Delaware, the Department of Health and Social Services is allowing providers to return doses to the state for redistribution if they cannot use them. And New Jersey health officials are moving vaccine around between providers in an attempt to ensure that vaccine near its expiration date gets used first.

The extension of the shelf life was “great news,” said Donna Leusner, a spokesperson for the New Jersey Department of Health, allowing “more time to get shots in arms” for the hundreds of vaccination sites in the state with J&J in stock.

“Every shot counts,” she said.