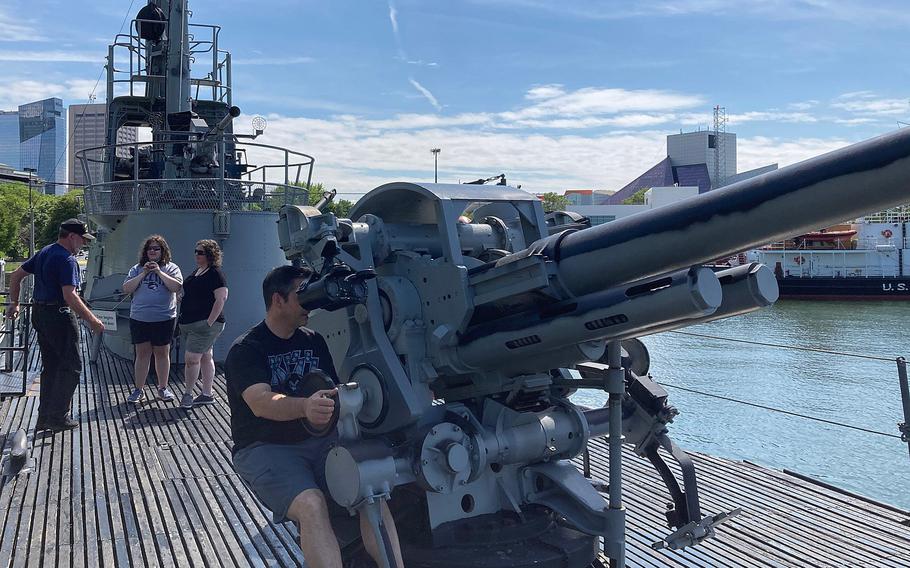 The U.S.S. Cod arrived in Erie, Pa., intact for its hull repairs. It has served as a floating museum in Cleveland, Ohio. (A.J. Rao/Erie Times-News)

The Cod, which functions as a floating wartime museum in Cleveland, embarked on the 100-nautical mile trip — via tugboat — on Sunday, and arrived at Erie’s DonJon Shipbuilding & Repair around 1:30 a.m. Monday.

The submarine will be drydocked at the shipyard for about six weeks to eight weeks as workers repair its underwater hull, apply a fresh coat of paint and remedy the vessel’s pitting, a type of corrosion caused by years of saltwater and freshwater exposure.

Rick Hammer, general manager of DonJon, said the submarine should be drydocked and “up on the blocks” by Tuesday afternoon.

“This is, as far as I know, the first time this has ever happened here — and most likely, probably the last time it will happen here,” Hammer said. “There’s not too many subs on the lakes, and not too many WWII subs on the lakes. It’s a one-off opportunity and we’re excited to get going.”

Paul Farace, president of the U.S.S. Cod Submarine Memorial, said he was nervous about the 14-hour trip to Erie. Indeed, this was the Cod’s first voyage since its last drydocking in 1963 in Lorain, Ohio.

But fortunately for Farace and his crew, who remained aboard the Cod during the trip, the vessel stayed intact.

“It was dry as a desert (inside),” Farace said. “It was just amazing that the sub that we had known for decades as a very stable, stationary ship was now rolling and heaving with the lake swells.”

Not everything was smooth sailing, however.

As the submarine pulled out of its perch at Cleveland’s North Coast Harbor via tugboat, its bow swiped a neighboring U.S. Coast Guard vessel, the Morro Bay.

The Cod also sustained a “nick” in its bow, Farace said.

“It was like backing out of your driveway and you bump the neighbor’s car,” he said.

The Coast Guard said the incident is still under investigation.

As the Cod pulled into Erie around 1:30 a.m., Farace said he was “gobsmacked” by a large swell of Erie residents who cheered the submarine’s arrival.

“We fired two deck gun salutes to honor Erie,” he said. “I think we may have scared a couple people.”

The Cod was towed by Michigan-based Malcolm Marine Inc.

The submarine will not be open for tours during repairs.

The Cod, launched in March 1943, conducted seven war patrols in the South Pacific and sank roughly 36,000 tons of enemy shipping.

It also performed history’s only international submarine-to-submarine rescue, when it saved the crew of the Dutch submarine O-19 after it got stuck on a reef in 1945.

“For three days, the Cod was kind of a joint Dutch-American submarine,” Farace said. “The Dutch were really touched by that and they adopted Cod as an honorary Dutch submarine.”

The Dutch flag still flies at the Cod Memorial site in Cleveland.

The Cod was decommissioned in 1946, reactivated in 1951 and mothballed again in 1954. The Cod was later towed through the newly opened St. Lawrence Seaway en route to Cleveland in 1959, where it served as a training vessel until 1971.

The Navy granted guardianship of the ship in 1976 to the Cleveland Coordinating Committee. Ten years later, the U.S. Department of the Interior designated the ship a National Historic Landmark. Since then, the submarine has been open to public and private tours.