The Pentagon is getting back $2 billion of military construction funds that were diverted in recent years by former President Donald Trump to fund his signature barrier wall efforts on the U.S. southern border, President Joe Biden’s administration announced Friday.

That money will be returned to its initial purpose — funding more than 60 military construction projects around the world approved by Congress, according to a statement from the Office of Management and Budget. The Pentagon, under Trump, diverted $3.6 billion in 2019 that had been earmarked to fund 127 military construction projects under a seldom-used authorization for the Pentagon to reroute its Congress-appropriated funds.

“The Biden Administration is committed to properly equipping American military personnel and caring for their families,” the OMB statement read. “No more money will be diverted for the purposes of building a border wall, and [the Defense Department] has started canceling all border barrier projects using the diverted funds.”

The $3.6 billion — a portion of the $10 billion that the Pentagon ultimately contributed to border wall coffers — was meant to build about 175 miles of fencing in Texas, Arizona and California, Pentagon officials said at the time. Then-Defense Secretary Mark Esper and other top defense officials said they were confident Congress would reinvest new money into the construction projects that lost funding in the shift. However, Congress never re-appropriated funding to those projects, which spanned 23 states, 3 U.S. territories and bases in 20 other countries and included a host of projects from upgraded training ranges and facilities to new barracks and schools.

The $2.2 billion returning to military construction will pay for 66 of the projects deferred under the Trump administration. The Pentagon said it chose which of the 127 deferred projects would be re-funded based on “operational and component priorities.” A spokesman did not immediately respond to a request for specifics about the projects.

OMB listed five of the projects as top priorities:

— $10 million to add two new anti-ballistic missile ground-based interceptors at Fort Greely in Alaska. — More than $25 million to build a 2nd Radio Battalion Complex at the Marine Corps’ Camp Lejeune in North Carolina. — $79 million to build a new Spangdahlem Elementary School in Germany, for 600 U.S. military children.  — More than $25 million for a fire/crash rescue station at Tyndall Air Force Base in Florida. — More than $9 million for an upgraded small arms training range in Indiana for Air National Guard units.

Trump’s controversial move to divert the funding was met with castigation from Democratic lawmakers, some of whom described the reprogramming effort as a theft of needed military funds.

Biden has long been critical of Trump’s border wall efforts and immediately moved to end construction of as much as he legally could after his inauguration Jan. 20.

America has the right to secure its borders, Biden said at the time. However, “building a massive wall that spans the entire southern border is not a serious policy solution. It is a waste of money that diverts attention from genuine threats to our homeland security.”

During Trump’s time in office, about 450 miles of border wall were built, although the vast majority covered upgrades in areas where border barrier existed, according to the Department of Homeland Security.

OMB said Friday that the Trump administration built 52 miles of wall where no border barrier existed. The office estimated some sections of the wall cost about $46 million per mile.

“The effort diverted critical resources away from military training facilities and schools, and caused serious risks to life, safety, and the environment,” according to the Biden OMB statement Friday. “It also took attention away from genuine security challenges, like drug smuggling and human trafficking.”

Meanwhile, the Pentagon has continued the deployments of active-duty and National Guard troops authorized by Trump in 2018 to the southern border to support U.S. Customs and Border Protection agents. About 3,600 troops are serving on a federal mission to support border operations, according to the Pentagon. Several hundred additional National Guard troops are serving missions authorized by state governors at the border.

The federal deployment is authorized through Oct. 1. The Homeland Security Department has asked for troops to continue the federal mission into fiscal year 2022 amid high levels of apprehensions along the southwest border. The Pentagon has yet to reveal if it will continue the deployments.

In May, U.S. Customs and Border Protection reported more than 180,000 apprehensions of migrants at the border, the largest monthly total in at least two decades. The agency reported apprehending about 178,000 migrants in April. 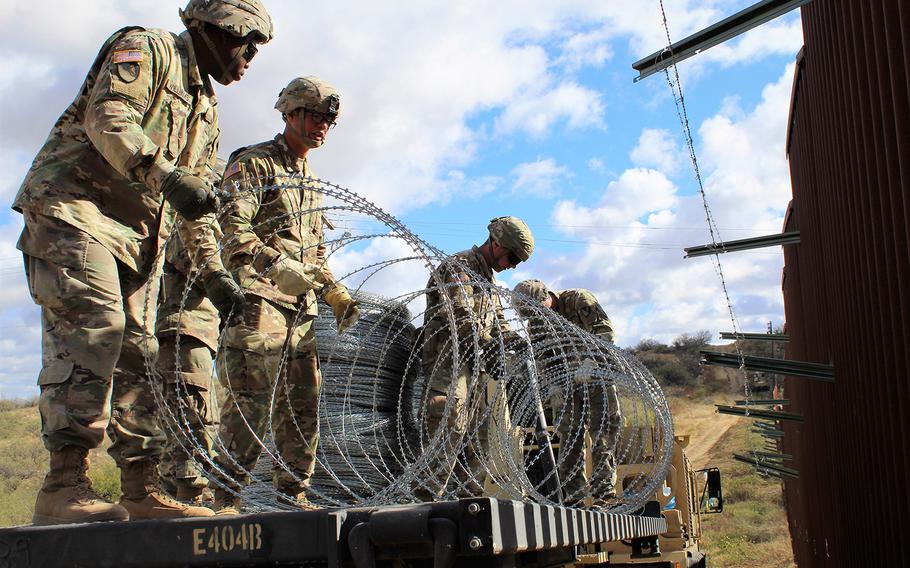