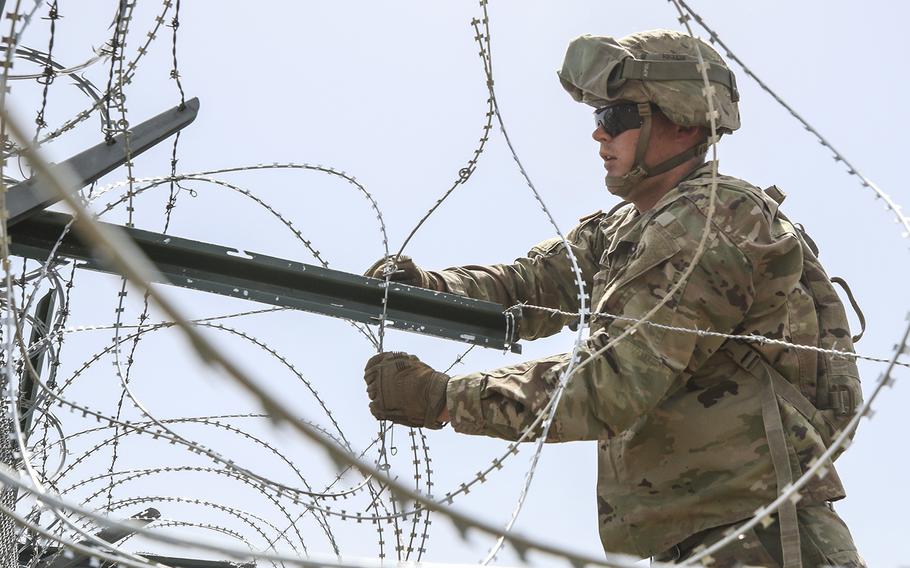 AUSTIN, Texas — Three projects to build barriers along the U.S.-Mexico border must be delayed because the Pentagon does not have enough money to complete them, a Defense Department official revealed in court documents.

The projects were authorized Aug. 26 after Pentagon officials determined cost savings from previous wall construction contracts could be used for additional barriers at the southern border. But the savings were less than estimated and the projects are on hold now, according to court documents in an ongoing legal battle to stop Defense Department dollars from being used to build the wall.

The savings from contract negotiations were projected to be about $400 million, said Lt. Col. Chris Mitchell, a Defense Department spokesman, who confirmed Wednesday that the Pentagon no longer plans to complete the three projects.

Kenneth Rapuano, assistant secretary of defense for homeland defense and global security, wrote in the court documents filed Friday that the Army Corps of Engineers informed him that the cost savings previously identified are insufficient to undertake the three additional projects. For that reason, the department decided not to pursue the projects, he wrote.

The court documents are part of a lawsuit filed in California by the American Civil Liberties Union on behalf of the Sierra Club and the Southern Border Communities Coalition to stop Pentagon funds from being used to build the border wall. The Supreme Court in July ruled against a hold on the funds related to the lawsuit, which is now in the hands of the Ninth Circuit Court of Appeals.

The three projects, located in Arizona, would have totaled 20 additional miles built along with 129 miles of wall funded through $2.5 billion transferred to the Army Corps of Engineers from drug interdiction funds. Former acting Defense Secretary Pat Shanahan approved the initial funding of border projects earlier this year, following plans outlined in President Donald Trump’s Feb. 15 declaration of a national emergency at the border.

“Given the lack of anticipated savings, the department cannot pursue these three additional projects at this time; however, [U.S. Army Corps of Engineers] is still on track to complete the original 129 miles of border barrier as requested by [the Department of Homeland Security] and [Customs and Border Protection] and approved by the secretary of defense,” Mitchell said.

Earlier this month, Defense Secretary Mark Esper approved $3.6 billion from the military construction budget to fund another 175 miles of wall through 11 projects – a move that has not gone over well with some Democrat lawmakers.

“Trump’s decision to build his vanity wall with funds stolen from military construction projects and homeland security initiatives isn’t really about border security. It’s about politics,” Sen. Tammy Duckworth, D-Ill., said during a Sept. 12 speech. “If he actually wanted to secure the border, he wouldn’t strip away funding from the dedicated men and women who are responsible for defending it.”

Esper and defense officials have said none of the 127 military construction projects losing money for the border wall will be delayed or canceled if Congress agrees to backfill the projects in the National Defense Authorization Act for fiscal year 2020, which is now in a congressional conference committee to sort out differences between the House and Senate versions of the bill.

The House voted down a Republican-backed motion Tuesday to instruct the conference committee to support backfilling those projects. The vote was mostly along party lines.