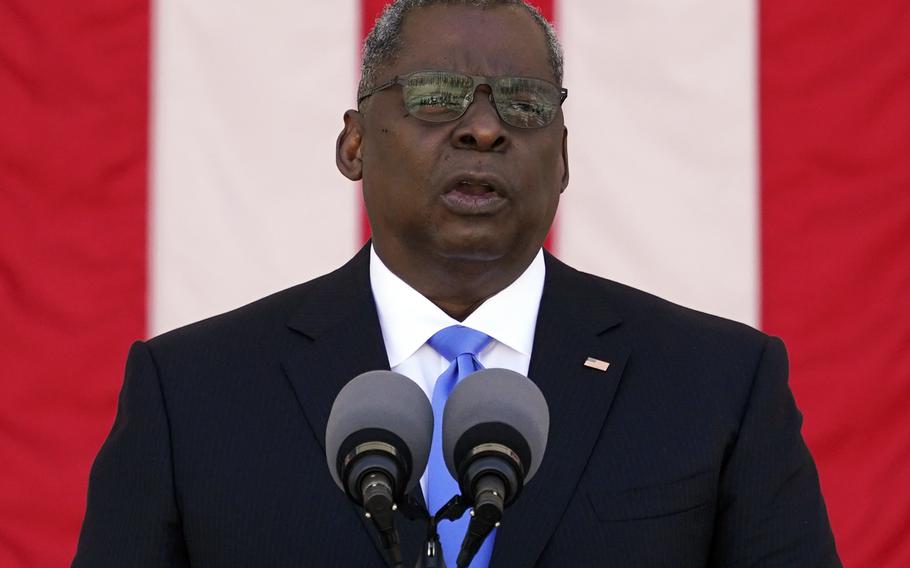 WASHINGTON (Tribune News Service) — Defense Secretary Lloyd Austin slammed Sen. Ted Cruz on Monday for accusing the Army of projecting an image of “pansies” because of its inclusive recruiting policies, asserting that the Texas Republican’s rhetoric only emboldens adversaries.

China and Russia “would like to capitalize on talking points like that,” the Pentagon chief told CNN in a Memorial Day interview, insisting the U.S. military will never be “soft.”

Earlier in May, Cruz complained that “woke” policies have undermined military readiness, amplifying conservative complaints about a recruiting ad that featured a female soldier raised by two moms.

“Holy crap,” Cruz wrote in a tweet. “Perhaps a woke, emasculated military is not the best idea.”

He escalated his attack by complaining of a “woke cancer” afflicting the military. “We have the greatest military on earth, but Dem politicians and woke media are trying to turn them into pansies,” he asserted.

“Pansy” has long been a slur for gay and weakling, and Cruz has used it repeatedly in recent weeks.

“I think we’re doing a great job in terms of recruiting the right kinds of people, providing access to people from every corner, every walk of life in this country,” Austin told CNN, insisting that diversity “must be a part of who we are.”

Austin served as commander of Central Command, vice chief of staff of the Army and commanding general of US forces in Iraq before President Joe Biden tapped him to lead the Pentagon.

The Senate confirmed him 93-2, with support from both Cruz and Texas’ senior senator, both Republicans.

The uproar began with a viral video that contrasts the Army ad, featuring a soldier who marched for gay rights as a girl, with an uber-macho Russian recruitment ad that shows chiseled soldiers doing push ups, paratroops jumping from planes, and a sniper taking aim in the snow. Cruz’s “holy crap” assessment was a comment on that video as he retweeted it.

He has insisted that it’s a distortion to interpret his comments as attacking the military, rather than the progressive ideology reflected in the ad that features Cpl. Emma Malonelord.

“This is the story of a soldier who operates your nation’s Patriot Missile Defense Systems,” she says in the partly animated video. “It begins in California with a little girl raised by two moms.”

“I like to think I’ve been defending freedom from an early age,” she says.

A top high school student and a sorority girl, Malonelord explains she “needed my own adventures, my own challenge. And after meeting with an Army recruiter, I found it — a way to prove my inner strength and maybe shatter some stereotypes along the way.”

A few hours after Cruz’s “holy crap” tweet, Lt. Gen. Ted Martin, deputy commander of the Training and Doctrine Command, which includes the Army’s Recruiting Command, issued a barely veiled rebuke, pointing his Twitter followers to the Malonelord ad with the hashtag “WeHaveTheBestPeople.”

Biden ended a ban on transgender troops. Austin has ordered diversity and inclusion training and focused on rooting out extremism in the ranks, moves that some conservatives take as an affront.

“Ted Cruz attacks a US Army soldier for telling her story, says he prefers Russians. Because Ted Cruz is a sedition-loving traitor,” asserted Vote Vets, which promotes progressive candidates who served in uniform.

Sen. Tammy Duckworth, an Illinois Democrat who lost two legs when the helicopter she was flying in Iraq was shot down, also referred to the Jan. 6 mob that invaded the Capitol as Cruz led an effort to overturn Trump’s defeat.

She accused him of “pushing white supremacist propaganda and denigrating the United States military” that protected him during the riot.