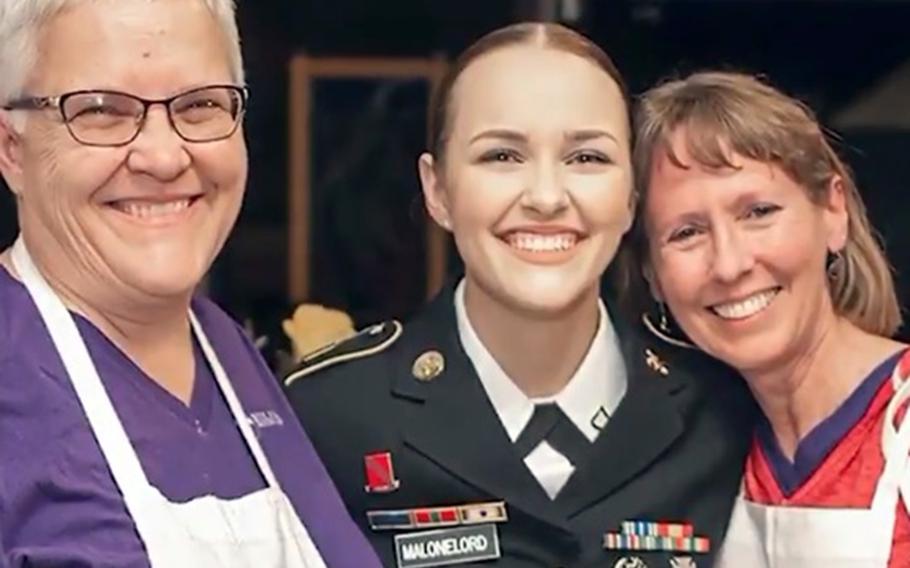 Cpl. Emma Malonelord poses with her two mothers in this screenshot from an Army recruiting video. Army leaders praised Malonelord after a mashup of the soldier's video was criticized by Sen. Ted Cruz on Twitter. U.S. Army (U.S. Army)

This story has been updated with a response from Sen. Cruz’s office.

U.S. Army leaders rallied around a soldier featured in a recruitment video clip that Sen. Ted Cruz mocked as representative of an “emasculated military.”

The original video, part of a five-part series called “The Calling,” showed an animated depiction of Malonelord’s life and the reasons why she joined the military.

The Army was “a way to prove my inner strength and maybe shatter some stereotypes along the way,” Malonelord said in the video, adding that by enlisting, “I answered my calling.”

Cruz retweeted a shorter version of the ad that was juxtaposed with a video of Russian service members staring menacingly into the camera.

“Holy crap,” Cruz said on Twitter to his 4.4 million followers. “Perhaps a woke, emasculated military is not the best idea.”

Cruz’s retweet was shared over 14,500 times and the edited video received over 3 million views. Following his viral tweet, Army leaders expressed support for Malonelord and her service.

“For what it’s worth, I met this Corporal a few months ago during a routine unit visit,” Abrams tweeted Friday. “Exceptionally sharp, professional, technical expert, highly respected by her peers, superiors and subordinates.”

The Army Enterprise Marketing Office, which manages the service’s recruitment efforts, also supported Malonelord’s service and added that “it is important that the Soldiers featured in the campaign reflect the incredible diversity of both the Army and the American public.”

“We are now seeing the various tweets of support for Cpl. Malonelord,” AEMO public affairs chief Laura DeFrancisco said in a statement to Stars and Stripes. “She volunteered to tell her story as part of this campaign with the four other Soldiers in ‘The Calling.’ We’re glad to see the supportive comments from those who know and work with her.”

DeFrancisco added that Malonelord “is grateful for the support she has received from leaders across the Army.”

Cruz addressed the controversy in a separate tweet and said “lefty” commentators on Twitter were “dishonestly claiming” he was disparaging the military.

“We have the greatest military on earth, but Dem politicians & woke media are trying to turn them into pansies,” Cruz tweeted.

A spokeswoman for Cruz responded to Stars and Stripes.

“Sen. Cruz passionately supports the brave men and women of the United States military and has repeatedly expressed concerns that Democrat politicians, left wing bureaucrats, and the media are politicizing our armed forces to promote a fringe woke agenda based on identity politics,” Erin Perrine wrote in an emailed statement. “Our military should be focused on winning wars, and we endanger our national security and our servicemembers when they focus on anything else.”