Lawyers for the Oath Keepers urged a federal judge Wednesday to toss out a lawsuit accusing the group, former president Donald Trump, lawyer Rudy Giuliani and another far-right organization of inciting the Jan. 6 storming of the Capitol, calling its actions a form of peaceful political protest protected by the First Amendment.

Attorneys for Trump and Giuliani also filed motions asking the case to be dismissed, with the former president repeating the argument that he is immune from civil lawsuits over actions he took while in office.

The Oath Keepers said it was "conclusory and speculative" to assert that its members planned anything other than to attend a speech of the president at the Ellipse near the White House that day, march to the Capitol and make known to Congress their views opposing the presidential election certification.

The group added that 11 House lawmakers led by Homeland Security Committee Chairman Bennie Thompson, D-Miss., had no right to file suit in their personal capacities or as individuals under the Ku Klux Klan Act — an 1871 law enacted after the Civil War to bar violent interference in Congress's constitutional duties — as opposed to a case brought by the whole House.

If "the right of the people to exercise their right to peaceably assemble for the purpose of petitioning Congress for redress of grievances should be subject to a conspiracy law," there will be "nothing left" of the constitutional right to petition at all, Oath Keepers attorney Kerry Lee Morgan of Michigan wrote in a 44-page filing.

Thompson and other lawmakers, represented by the NAACP, alleged in federal court in Washington that Trump's and Giuliani's false claims that the election was stolen fomented a raid including members of the far-right Oath Keepers and Proud Boys that violated lawmakers' civil rights.

Rioters sought to harass and impede lawmakers from carrying out their official duties, and more than 200 representatives, staffers and relatives were forced to don masks, evacuate, shelter in place or take other emergency actions, the suit asserted.

"We must hold [Trump] accountable for the insurrection that he so blatantly planned," Thompson said at the time.

The Oath Keepers, a loose network of groups including some self-proclaimed citizen militias, have provided security to conservative politicians and causes, with some members believing the federal government is conspiring to strip Americans of their rights.

U.S. prosecutors have criminally charged at least 15 alleged Oath Keepers or associates in the Capitol riots, including some accused of conspiring to obstruct Congress's confirmation of the presidential election results. Charging papers accuse certain Oath Keepers of coordinating communications and moving in unison during the riots to force entry. Prosecutors have also alleged that several were in direct contact before, during and immediately after the breach with Oath Keepers founder Stewart Rhodes, identified in court documents as "Person One" by the government.

In its bid to dismiss the civil case, the Oath Keepers asserted that individual members of Congress lack standing to sue to "assert the institutional interest which the Constitution grants exclusively to the House of Representatives."

Morgan, a Libertarian Party nominee who finished sixth out of seven candidates running for two Michigan state Supreme Court seats in November, with 4.6% of the vote, argued that "Absent violence, the First Amendment erects a strong barrier against use of [the Klan Act] to trample down First Amendment rights."

"In analyzing Plaintiffs' instant complaint, the inescapable conclusion is that it stigmatizes with inflammatory language the right of the people present in the District and at the Capitol to assemble for the purpose of petitioning the government of the United States in connection with the Electoral College."

In seeking to toss the Thompson lawsuit, lawyers for Trump echoed arguments from their request to dismiss another lawsuit with similar allegations filed against him by Rep. Eric Swalwell, D-Calif.

The former president has absolute immunity from lawsuits over his official actions while in office, and he was free to urge Congress to take actions favorable to him in its electoral count, his lawyers argued.

"Plaintiffs are all members of Congress; each has engaged in controversial speech. Yet they have chosen to foreswear their oaths to support and defend the Constitution by attempting to undermine the First Amendment by bringing this lawsuit, based on their longstanding and public grudges against President Trump," Trump's lawyers wrote. The filings called the Thompson lawsuit a rehash of "the same baseless and misleading allegations" raised in Trump's second impeachment trial in February.

Swalwell alleged the mob attack was "a direct and foreseeable consequence" of the "express calls for violence" and false and incendiary allegations of election fraud by the four, who spoke at the Jan. 6 Ellipse rally before members of audience marched to the Capitol.

A spokesman for Trump has said the president did not plan or organize the Jan. 6 rally on the Ellipse or incite or conspire to incite any violence at the Capitol that day.

In moving separately to dismiss the Swalwell suit, lawyers for Giuliani argued that "no reasonable reader or listener would have perceived Giuliani's speech as an instruction to march to the Capitol, violently breach the perimeter and enter the Capitol building, and then violently terrorize Congress into not engaging in the Electoral Certification." Giuliani's motion also said his reference to "trial by combat" was clearly hyperbolic, not literal nor meant as an immediate call.

Giuliani's lawyers argued similarly against the Thompson suit, noting that the president's lawyer immediately condemned the riots as "shameful." Giuliani's defense said it was "too far-fetched and outlandish" to have the court believe the plaintiffs would successfully do what the FBI hasn't to date, which is to "tie Giuliani and Trump to a vast conspiracy to mastermind the attack on the Capitol." 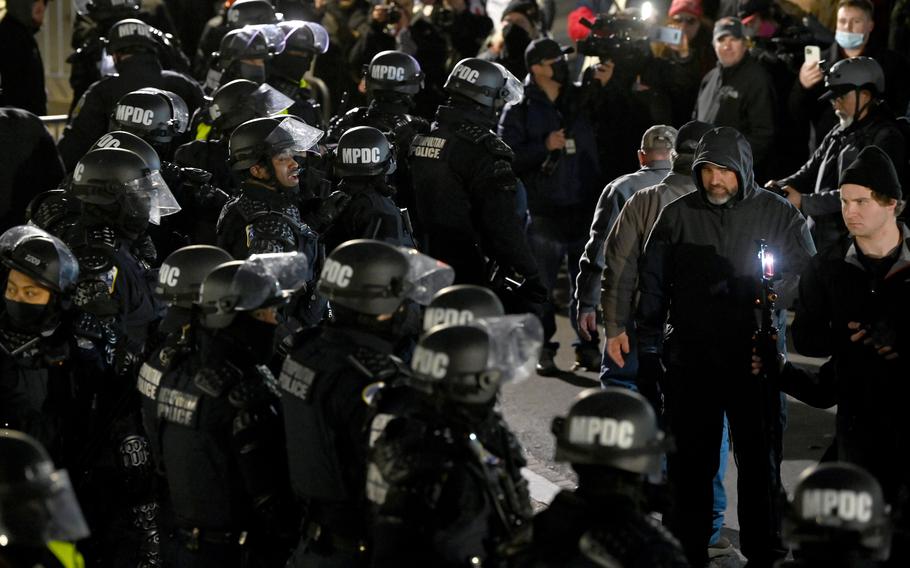