Many couldn't visit Arlington Cemetery on Memorial Day 2020 because of COVID, so this woman did it for them

Last Memorial Day, Emily Domenech was visiting her grandfather's grave in Arlington National Cemetery when she noticed the military memorial was largely empty. The pandemic was raging and COVID restrictions allowed only family members to visit.

Domenech pulled out her cellphone and made an offer on Twitter:

"Does anyone have buddies buried in Arlington who they would like visited today?" she asked. "Since only family members are allowed in, I would be honored to pay respects on your behalf ..."

Does anyone have buddies buried in Arlington who they would like visited today? Since only family members are allowed in, I would be honored to pay respects on your behalf...

Domenech, 36, said she thought she might hear from one or two friends. Instead, by the end of the day hundreds of people had reached out with requests — mostly strangers — and her tweet went viral.

On a day she planned to spend 30 minutes at her grandfather's grave, she ended up at the cemetery for six hours to honor soldiers she'd never known and share photos of their gravesites on Twitter for their loved ones.

"I visited 60 graves and had such a huge response, I thought, 'Something special is happening here,' " said Domenech, a former Pentagon employee who lives in Alexandria and recently became a senior policy adviser to House Minority Leader Kevin McCarthy, R-Calif.

She said there was only one option for Memorial Day 2021: "I had to do it again."

Can’t make it to Arlington Cemetery this weekend? Participate in #TheHonorProject by learning the name, visiting the grave, and sharing the story of a fallen hero from your community 🇺🇸 https://t.co/Pdw2hisPwe

Domenech now plans to spend most of this holiday weekend at Arlington to visit graves for others who can't make the trip, even though most pandemic restrictions have been lifted.

This year, she will have help.

The Travis Manion Foundation, a support organization for veterans and the families of fallen soldiers, heard about Domenech's efforts and coordinated several hundred volunteers through an arrangement they call the Honor Project.

From Friday to Sunday, the group will place small wooden American flags at the gravesites of 4,000 veterans buried at Arlington, then share photos on social media for their friends and family under the hashtag #TheHonorProject. People can register online to have a volunteer visit a loved one's grave.

"I never expected that my spur-of-the-moment tweet would launch a movement, but now I'm hoping this is something we can do every year," Domenech said.

"Not everyone can make it to Arlington, even without a pandemic going on," she said. "This is a way for them to still take part on Memorial Day, even if they live on the other side of the country."

For Domenech, visiting Arlington National Cemetery has long been a family tradition, she said. Her grandfather John Domenech, an Army colonel who served during World War II and the Korean and Vietnam wars, was buried there in 2006.

"I visit his grave every Memorial Day and Veterans Day to honor him," said Domenech, "and usually, it's pretty crowded."

After her tweet last year from the cemetery, Domenech heard from a woman whose husband died in Afghanistan months earlier and had recently been buried in Arlington, she said.

"She hadn't yet seen his headstone, so I was able to take a photo of it and send it to her," Domenech said. "It was moving to support a person I'd never met. And it was cool to have that personal connection."

Domenech had a handful of carnations with her that day, which she left on as many graves as possible.

"I ran out pretty quickly, but it was still nice to be able to take a photo and tag people on social media," she said. "Judging by the response I received, it meant a lot."

One of those who noticed her efforts was Ryan Manion, whose brother is the inspiration behind the Travis Manion Foundation. In 2007, Manion was killed during an ambush on patrol in Iraq while aiding wounded fellow Marines.

Ryan Manion, who is president of the foundation and lives in Doylestown, Pa., admired what Domenech had done and told her she'd like to help.

"Here she was with this tangible idea, saying, 'I want to honor your loved one,'" said Manion, 41. "The most important thing to Gold Star families is that their loved ones aren't forgotten."

When Manion put the word out to her volunteers that help was needed at Arlington this year, more than 300 responded, she said.

"The idea is to start here, then maybe we can also do this at other cemeteries for people who can't visit in person," she added. "Emily has started something that could really be long-lasting and grow much bigger around the country."

For Sarah Geisen, one of the volunteers who signed up, visiting the graves of strangers is the "least she could do," she said, since so many people have been affected by COVID and can't travel.

Geisen's brother, Army Special Forces Capt. Drew Patrick Ross, was killed in Afghanistan in 2018 by an improvised explosive device. He is buried in Arlington, and she couldn't imagine not being able to visit his final resting place, she said.

"I wish I had known what Emily was doing last year, and I would have joined forces with her," said Geisen, 35.

She said COVID has affected many Gold Star Families who have had to delay funerals or been unable to travel to Arlington.

"It's been a gut-wrenching experience for a grieving community," she said.

Domenech said that as she wandered around the cemetery last year, she came upon the grave of a Marine who shared her July 26 birthday.

"I said his name aloud and stood there for a little while to wonder about his life and the people who will celebrate his birthday without him every year," she said. "He deserved to be remembered." 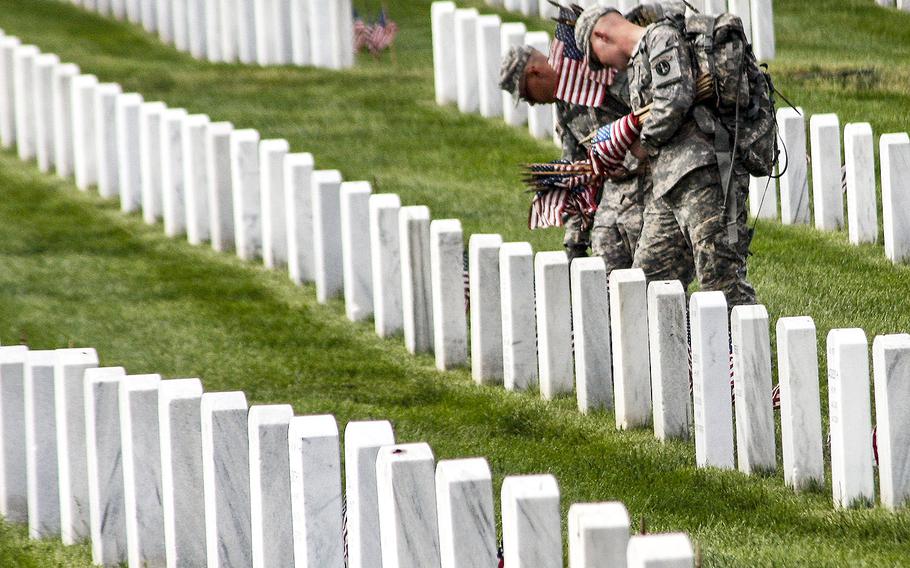