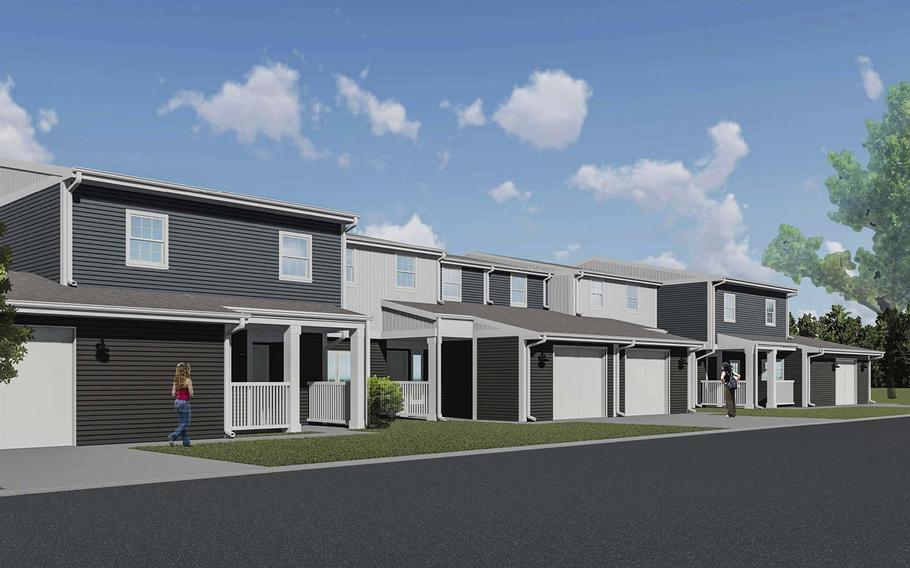 A conceptual exterior illustration of the renovations 170 New Hammond Heights homes will receive as part of the $87.4 million development project underway at Fort Campbell, Ky. (Lendlease)

The money speeds up plans to upgrade family housing with a focus on junior enlisted and noncommissioned officer housing at Fort Hood in Texas, Fort Campbell and Fort Knox in Kentucky, Fort Drum in New York, and Army housing in Oahu, Hawaii, said Phillip Carpenter, chief operating officer of Lendlease, the private company that manages housing at the bases.

Across all the bases, the homes will have similar layouts with open floor plans and garages with expanded storage space.

“We're trying to stay consistent,” Carpenter said. “We've proposed to the Army, a suite of furnishings. They know what flooring we will utilize, our counter tops, stainless-steel appliances and a really modern, open-floor plan for our families going forward.”

Army and Lendlease will celebrate the projects in a ceremony next week at Fort Hood, which stands to gain the most benefit of the funding. About $420 million will pay for the demolition of and new construction of nearly 600 new homes for junior NCOs. It will also pay for roof replacements on more than 2,300 homes and medium renovations at more than 1,300 homes.

“Under the guidance of Army senior leaders to ensure readiness of our force and quality of life for soldiers and their families, we have reached an extraordinary milestone with Lendlease,” said Gen. Ed Daly, commander of Army Materiel Command. “This additional investment will go a long way in improving the quality of homes for soldiers and their families.” In a March 2021 photo, ground is broken at Fort Campbell, Ky., for Erevia Park, part of a larger $87.4 million development plan the Army approved in 2020, and is funded through Lendlease's project reinvestment account. (Sam Shaw/U.S. Army)

There has been pressure from military leaders and Congress for the private companies that manage military housing to accelerate improvements on homes after media reports about two years ago began to expose the dangerous conditions and toxic exposures some families have faced in base housing. The Army leaned on Lendlease about eight months ago to seek out additional loans, and Carpenter said doing so has allowed the company to speed up its revitalization timeline by about 10 years.

Some of the first work that families will see at Fort Hood is on 600 new homes in the old Chaffee Village, where Lendlease abandoned an effort several years ago to renovate two- and three-bedroom duplexes into large five-bedroom homes.

“When we started renovating the houses it just became too cost prohibitive to renovate,” Carpenter said. “We currently have some infrastructure installed that will help us to start quicker.”

This new funding will not impact the ongoing exterior renovation project Lendlease began in July on 972 homes known to have a construction defect. As of this month, work to repair the flaw has been completed in 203 homes. Now that the weather is improving, Carpenter said that project should begin to move faster.

Lt. Gen. Pat White, commander of Fort Hood, said the work is a positive start to “refresh” housing on base. Speaking Monday about the upcoming ceremony, he said Lendlease manages about 5,600 homes at Fort Hood, but the new work will only impact about 14% of the inventory. After the work is complete, there will still about 35% of Fort Hood housing that is more than 30 years old, and decisions still need to be made on what to do about it.

“That's what we’ve got to kind of get after. Do you invest in continuing to repair them? Do I make decisions as a senior commander to shutter them until we get enough money, and we just don't let people in there? [Then] they’ve got to go off post, which is a challenge,” White said. “I feel good that we will start down a positive path. We just have to keep the momentum going.”

Fort Campbell will see the next largest amount of the funding, with about $235 million going toward the demolition of 430 homes, the construction of more than 530 new junior NCO homes, minor renovations at nearly 500 homes, and nearly 140 roof replacements.

About $45 million will provide Fort Drum housing with minor renovations at more than 700 homes, installation of more than 650 new HVAC systems, and siding and roof repairs on more than 300 homes.

New homes at Fort Knox will include about a dozen homes for general officers to accommodate the activation of V Corps at the Kentucky base. The headquarters brought about 650 soldiers to the base last year.

“We anticipate using those existing historic [general officer] homes for lower officer ranks, lieutenant colonels and so forth, because primarily with [Human Resources] Command there, and with now the V Corps there, the installation is mainly made up of senior NCOs, or officers,” Carpenter said.

In Hawaii, Lendlease is spending about $30 million for minor renovations at more than 620 homes, more than 160 roof replacements, and the construction of four new playgrounds.

Residents have expressed a desire for neighborhood parks, playgrounds and walking trails, so those will be included throughout the new projects at each base, Carpenter said.

Fort Wainwright, Alaska, was part of the January announcement of the $1.1 billion in new funding, but is no longer included, according to Lendlease. The company couldn’t reach an agreement with the lender on the scope of work.

Across the Army, Lendlease manages about 40,000 residential units, 192 apartments and more than 12,000 hotel rooms.