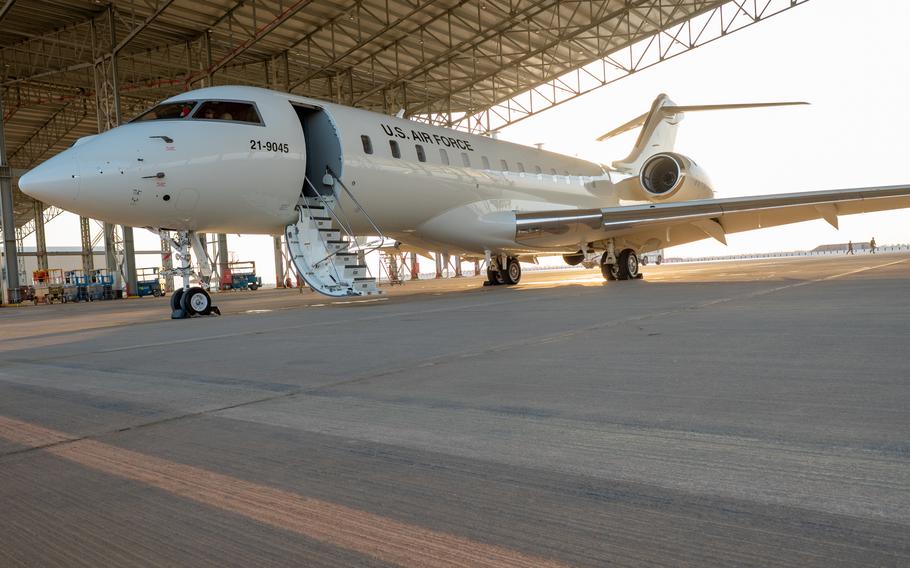 The Air Force’s new E-11A Battlefield Airborne Communication Node is now circling the skies over the Middle East, as the U.S. seeks to extend the range of communications for its own units and its military partners.

The brand-new jet first touched down at Prince Sultan Air Base in Saudi Arabia in December, the Air Force announced last week.

Essentially functioning as a low-Earth satellite, the BACN system allows for data transmission between different aircraft systems and provides a signal boost to on-the-ground units.

By connecting to the aircraft, troops within its range can contact distant operations centers or coordinate close air support without setting up satellite communications in difficult terrain.

The jet could be used in U.S. and NATO efforts to deter Russian aggression. Aircraft trackers recently recorded E-11As operating off the coast of Syria and Lebanon at a time when the Russian navy encountered allied forces in the Mediterranean.

The E-11A is operated by the 430th Expeditionary Electronic Communications Squadron and joins three jets of its kind in the unit’s arsenal, which has been strained because of continuously high demand, the Air Force said in the statement.

“This new E-11A will relieve the pressure on the rest of our fleet and enable us to sustain a high mission capable rate,” Lt. Col. Todd Arthur, the 430th EECS commander, said in the statement.

Prince Sultan, a Saudi base south of Riyadh with a continuous U.S. presence, has emerged as a focal point for U.S.-Saudi military cooperation. 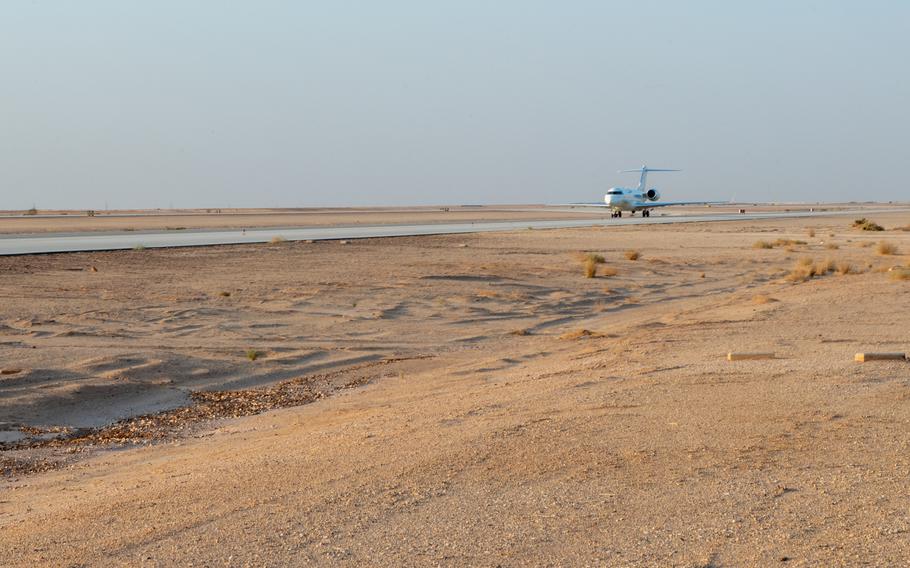 A U.S. Air Force E-11A lands at Prince Sultan Air Base in Saudi Arabia on Dec. 16, 2022. This E-11A is the newest addition to 430th Expeditionary Electronic Communications Squadron's fleet and extends the range of communications channels for military units. (Shannon Bowman/U.S. Air Force)

Reinforcement of the small fleet of high-demand communications aircraft is the latest update among military and intelligence initiatives thought to address the threat of Iran amid Russian use of Iranian-made drones in its unprovoked war against Ukraine.

The Air Force plans to triple its E-11A fleet with six new aircraft as part of a $464.8 million contract. The planes, which are based on the Canadian commercial Bombardier Global 6500 platform, are modified to carry a range of high-bandwidth data link terminals and airborne radios.

Until 2020, the unit was deployed at Kandahar Airfield in Afghanistan. Its crews were in such high demand there that the small fleet of aircraft rarely left the theater other than for maintenance.

E-11A pilots, who come from other aircraft types and volunteer for the highly specialized duty, often flew their first missions in the jet only after arriving in the combat zone, the Air Force told Stars and Stripes in 2020.

The E-11A fleet has suffered setbacks, including a crash in Afghanistan in January 2020 that resulted in the deaths of two 430th EECS pilots, whose jet suffered catastrophic engine failure.

After the hurried American withdrawal from Afghanistan in the summer of 2021, the EECS shifted across the Persian Gulf. Its crews continue to support exercises and operations with regional partners, the Air Force said in the Jan. 2 statement.

In 2021, the Air Force announced plans to bring a new BACN squadron to Robins Air Force Base, Ga. The first E-11A is expected to arrive at the base this spring.