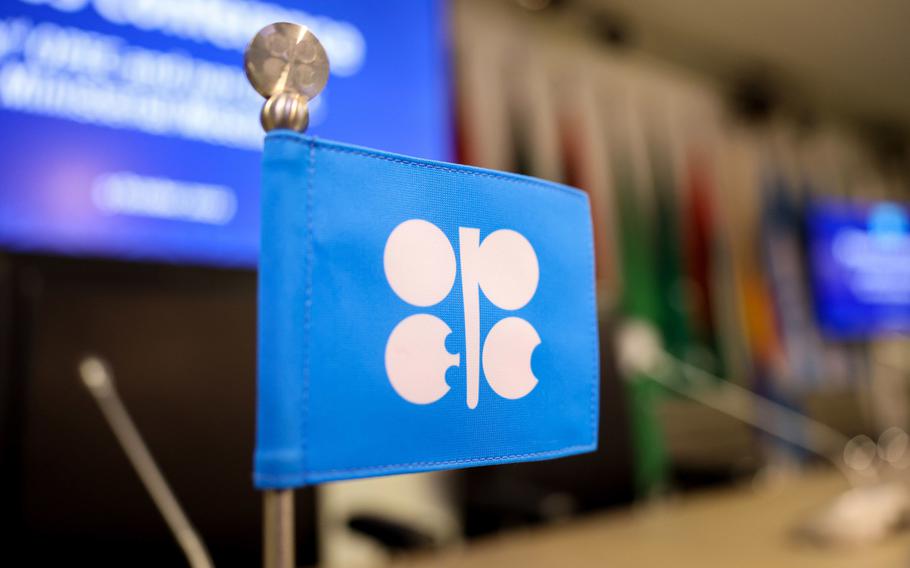 An OPEC-branded flag on a delegate desk ahead of the 33rd meeting of the Organization of Petroleum Exporting Countries (OPEC) and non-OPEC countries in Vienna, Austria, on Oct. 5, 2022. (Akos Stiller/Bloomberg)

OPEC and its allies are increasingly expected to hold production steady after the group shifted its meeting online amid an uncertain market outlook.

Earlier this week, OPEC+ delegates signaled that Saudi Arabia and its partners might consider additional output curbs at its gathering on Sunday, which at the time was scheduled to take place at the cartel’s Vienna headquarters.

But with the group’s decision to hold a virtual session instead, views are changing. While deeper supply cuts may still be discussed, oil analysts and OPEC+ officials widely predict that the alliance will keep output unchanged.

The Organization of Petroleum Exporting Countries and its partners face too much uncertainty right now to change course, they say. China’s demand outlook is unclear and European diplomats are continuing to haggle over a price cap on exports from OPEC+ member Russia.

“Opting for no-drama optics seemingly increases the likelihood of a rollover decision,” said Helima Croft, head of commodity strategy at RBC Capital Markets. “The OPEC work-from-home decision increases the focus” on the impact of European Union sanctions on Russia, which take effect on Dec. 5.

A decision to roll over existing output targets would give the 23-nation group time to assess the impact of the policy change it announced last month: a 2 million barrel-a-day cutback taking effect in November and December.

The group’s ability to plan ahead is being frustrated as European governments negotiate over measures to punish Russia for its invasion of Ukraine. Talks have stalled as the bloc struggles to calibrate a price cap on Russian sales, with some countries pushing for a lower level that would constrict Moscow’s ability to market its supplies.

“I’m not ruling out deeper cuts -- that’s of course on the table,” Sen said. “But that’s not our base case: I think OPEC+ will consider just rolling over the existing output cuts.”

Expectations of fresh curbs arose at the start of this week, when Brent crude futures sank to almost $80 a barrel on fears that lockdowns in China were crushing fuel demand in the world’s biggest oil importer.

While the prospect of a fresh supply reduction has receded, it hasn’t entirely disappeared.

“Concerns on oil demand weakness - in particular China’s lockdowns - are pointing to an OPEC cut,” said Claudio Galimberti, Houston-based head of Americas analytics at consultants Rystad Energy. “Yet, the organization will need to weigh that against the fact there’s still lots of uncertainty on the EU’s ban on Russia’s crude, which could result in significant production losses.”

That would make a wait-and-see approach the most prudent choice, Galimberti said. A rollover might also be welcomed by consuming nations.

President Joe Biden slammed the coalition when it announced the surprise cutbacks last month, threatening Riyadh with “consequences” for endangering the economic recovery and abetting Russia’s war effort. The International Energy Agency, which advises most major economies, this week urged OPEC+ to be mindful of consumers.

“It will be very important that the OPEC+ countries consider the very fragile global economic situation,” IEA Executive Director Fatih Birol said in an interview in Oslo. “Some of their main clients are about to slide into recession.”