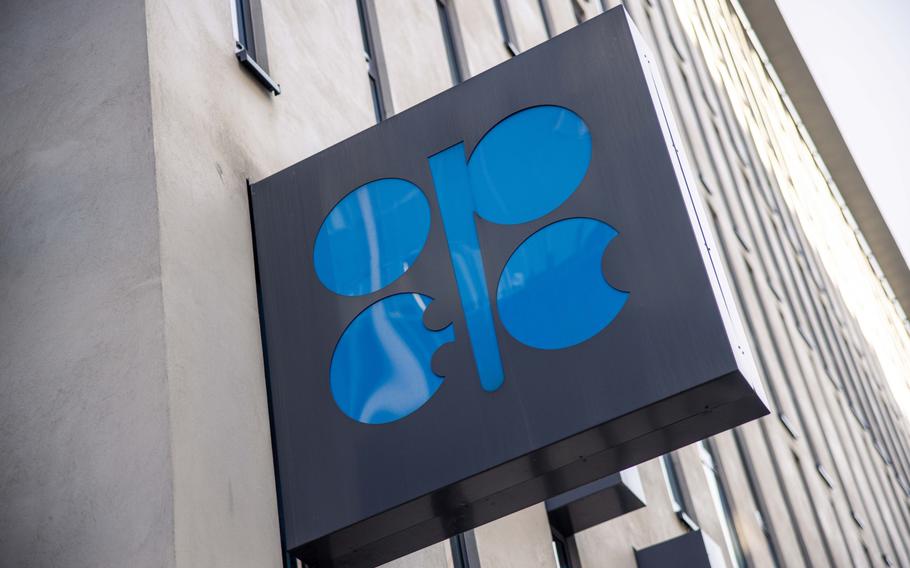 The logo of the Organization of Petroleum Exporting Countries (OPEC) on a sign at at the OPEC headquarters in Vienna on Aug. 17, 2022. (Akos Stiller/Bloomberg)

Oil’s rise toward $100 a barrel is exposing some of the risks in OPEC+’s controversial production cuts.

For about a month, the group’s decision appeared to fulfill its stated aim of stabilizing oil markets, with crude prices steadying against a deteriorating backdrop for fuel demand.

Now, at the mid-point between the Oct. 5 OPEC+ meeting and the group’s next gathering in December, prices have moved close to triple digits again as the seasonal demand peak threatens to coincide with additional sanctions on Russian supplies.

“I think OPEC+ is super-happy with stabilizing Brent in the $90s,” said Helge Andre Martinsen, senior analyst at DNB Bank in Oslo. But “there is a real risk of over-tightening in the next three-to-five months.”

The run-up in prices, just as the U.S. votes in midterm elections, threatens to further inflame relations between Joe Biden and Saudi Arabia, the cartel’s defacto leader. The president has fiercely criticized the kingdom for the supply curbs, accusing the long-time American ally of abetting fellow OPEC+ member Russia in its war on Ukraine.

In the weeks following the decision by the Organization of Petroleum Exporting Countries and its allies to cut output by 2 million barrels a day, the political fallout was intense. But initial trends in crude prices and demand gave some vindication to the strategy, which was spearheaded by Saudi Energy Minister Prince Abdulaziz bin Salman.

Oil demand has proved to be “significantly lower” than expectations, according to Russell Hardy, chief executive of Vitol Group, the world’s biggest independent crude trader. Demand in China, the world’s biggest oil importer, is unlikely to recover from strict pandemic lockdowns until the second half of 2023, Hardy said in a Bloomberg television interview.

“We’re in a world where demand is sloshing downward,” said Ed Morse, head of commodities research at Citigroup. “There’s ample supply in the market.”

Instead of the potential shortage that was being predicted a few months ago, global markets now faced a surplus this quarter, according to OPEC Secretary-General Haitham al Ghais.

Price differentials in key Asian markets have deteriorated as China re-confirmed its tough anti-Covid measures. The International Monetary Fund has warned that “the worst is yet to come” for the global economy.

“From the viewpoint of someone wanting to be preemptive about the balances, you would probably be happy you cut when you did,”said Paul Horsnell, head of commodities research at Standard Chartered Bank.

The OPEC+ supply cuts, which started this month, anchored crude near $95 a barrel, high enough to buoy revenues for the coalition’s 23 members but not the excessive spike that many politicians had predicted. Time-spreads for Brent -- the price differentials between monthly futures contracts that are seen as a gauge of supply and demand -- have remained stable.

“It’s not so much reducing the volume to increase the price, it’s really balancing supply and demand,” Oman’s Energy Minister Salim Al-Aufi said at the COP27 climate talks in Egypt on Tuesday. “That’s exactly what we’ve seen -- we’ve not seen an increase in price since the reduction was announced. It’s stabilized.”

In recent days, however, oil prices have gained momentum. Tentative signs of re-opening in China pushed prices higher on Friday, and the advance continued on Monday.

Oil inventories are significantly below average levels, and global markets are poised to tighten further in coming months with the planned imposition of European Union sanctions on Russian oil exports. The ban could slash the country’s output by almost 20% by the start of next year, according to the International Energy Agency.

“Brent is flirting with $100 again,” said Christof Ruhl, senior analyst at Columbia University’s Center on Global Energy Policy. “That’s exactly where no one in consuming countries -- from central banks fighting inflation or finance ministries preventing recession to a public that supports Ukraine against Russia -- wanted to see it.”

The IEA has warned that restricting oil output at this time could push fuel costs to levels that ultimately trigger a global recession.

The OPEC+ alliance is next due to meet on Dec. 4, a day before the EU embargo on Russian oil takes effect. The tension between the two countervailing forces of weakening demand and tightening supply may dominate proceedings.

Oman’s Al-Aufi said OPEC+ is “comfortable” with crude between $90 and $100 a barrel. The group will review its production levels periodically and could respond if it looks like the market needs more, he said.

“We can increase if we think the prices are getting crazy,” Al-Aufi said.

Bloomberg’s John Ainger and Manus Cranny contributed to this report.