In Persian Gulf, a lucrative revolving door for retired US troops 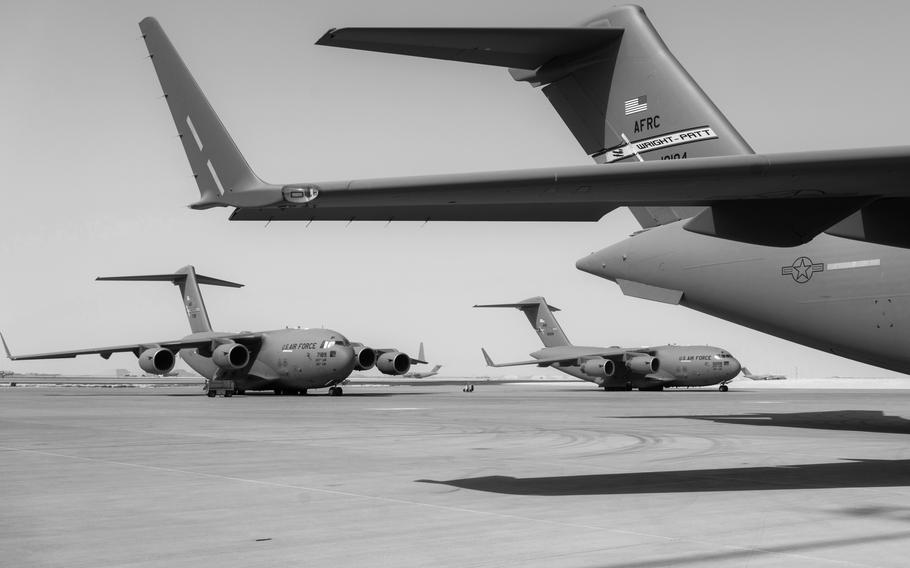 At al-Udeid Air Base in Qatar, American C-17s wait in August 2021 to ferry Afghan civilians being evacuated from Kabul. Al-Udeid is the largest U.S. military installation in the Middle East. (Lorenzo Tugnoli/The Washington Post)

In June 2018, Army Brig. Gen. Joseph W. Rank sought federal permission to accept a tempting opportunity: to work as a paid consultant for the defense minister of Qatar, a wealthy Persian Gulf nation trying to upgrade its armed forces.

At the time, Rank was two months away from retirement in his military job as the acting deputy assistant secretary of defense for the Middle East, which meant that he oversaw U.S. defense policy toward Qatar while he negotiated personal employment with the country.

Rank was seeking to work for Qatar via a small consulting firm, Global Alliance Advisors, owned by six former senior Pentagon officials, according to documents obtained by The Washington Post under the Freedom of Information Act.

Rank’s proposed salary was redacted from the documents. Records submitted by other members of Global Alliance Advisors show the firm was seeking to negotiate an unusually lucrative consulting deal with Qatar worth $23.6 million over three years, although that proposal later fell through. The Army gave preliminary approval to Rank’s request in August 2018, three weeks after he ended his assignment at the Pentagon, the documents show.

Rank noted in his federal application that he worked on matters involving Qatar while at the Pentagon.

In the end, Rank took a different job and never consulted for the Qataris. But the case illustrates how easy — and legal — it can be for senior U.S. military officers to arrange employment with foreign governments, even while they’re still on active duty.

Under federal ethics rules, military personnel who manage weapons programs or major defense contracts must observe a “cooling off” period of one or two years before they can accept jobs from companies they did business with while in uniform. The regulations, which also apply to other federal officials who interact with government contractors, are intended to prevent conflicts of interest and self-dealing. In some cases, officials face a lifetime ban from taking such jobs.

But the conflict-of-interest rules do not apply in the same way to retired U.S. troops who want to work for a foreign government. While they must obtain federal approval for the job, they are allowed to negotiate foreign employment before they retire, whenever they want, even with countries where they have been stationed for the U.S. military.

When Rank asked for U.S. approval to work for Qatar, he was wrapping up a 31-year military career during which he specialized in the Arab world. He had spent the previous 14 months in charge of the Pentagon’s policy shop for the Middle East, following four postings as a defense attache in the region and an assignment as the Joint Staff’s director for the Persian Gulf.

In response to questions, Rank, 57, acknowledged by email that he had had “discussions with potential employers” before his retirement from the Army and said he followed “U.S. requirements.” He declined to comment further.

Besides Rank, documents show that several other U.S. military officers sought employment with the government of Qatar after working closely with the country while on active duty.

For example, Air Force Lt. Col. Dave Haworth headed the office of military cooperation at the U.S. Embassy in Doha until shortly before his retirement in June 2018. Six months later, he applied for federal authorization to work as a $200-an-hour consultant for the Qatari armed forces, advising them on their purchases of U.S. weaponry.

The Air Force and State Department approved Haworth’s request in April 2019, documents show. He has been working as a military consultant in Qatar since then.

U.S. officials redacted Haworth’s name from the documents, but he confirmed his work for Qatar to The Post.

Haworth declined to comment on details of his work for Qatar. But he said the country was a natural place to look for a job once he retired from the Air Force. “What better place to find opportunities than your last duty assignment?” he said in a phone interview.

Located on a peninsula that juts into the Persian Gulf, Qatar is slightly smaller than Connecticut. But the Arab country has outsize strategic importance. It hosts the largest U.S. military installation in the Middle East — al-Udeid Air Base, with about 10,000 U.S. troops — and sits on the world’s third-biggest reserves of natural gas.

Like other gulf monarchies, Qatar has faced criticism from human rights groups, primarily allegations that it has tolerated abusive working conditions for migrant laborers. Freedom of speech is limited, though the emir of Qatar permitted the country to hold limited legislative elections last year for the first time.

Another retired Air Force officer, Lt. Col. Steve Bergey, applied for federal permission in 2017 to work as a military consultant for the Qatari Embassy in Washington, records show. Bergey had been stationed in Qatar for five years as a military attache at the U.S. Embassy and as an officer at al-Udeid Air Base before retiring from the Air Force in 2014.

In his application, Bergey noted that Qatar had signed more than $25 billion worth of U.S. weapons contracts over the preceding three years. He said the Qatari defense attache had “asked for my assistance in helping his office manage the production and delivery schedules of these contracts.” For his advice, he would be paid at a rate of $1,000 a day.

U.S. officials redacted Bergey’s name from the documents, but his duty assignments and other details matched his LinkedIn profile.

“There is absolutely no reason why employment by the State of Qatar would be inadvisable at this time,” Bergey wrote on his application. “On the contrary, this will only reflect favorably on the United States.”

The Air Force and State Department approved Bergey’s request in April 2018. He declined to comment.

A captain in the U.S. Navy Reserve received a similar job offer in 2016 to work as a military adviser for the Qatari Embassy in Washington at a rate of $6,000 a month, documents show. The captain had previously served in Qatar as a liaison officer at the U.S. Embassy in Doha. The Navy and State Department approved the officer’s request in 2017, though they redacted his name, citing his privacy.

The Navy captain said he would work part time for Qatari officials and “identify key points of contact” for them in Congress, among other duties.

Qatar has spent heavily to boost its military and improve relations with the United States since 2017, when Saudi Arabia and three other Arab countries imposed a trade embargo and travel blockade on Qatar because of its ties to Iran, alleged support for Islamist extremist groups, and other grievances.

In response, Qatari leaders recruited retired U.S. military officers and diplomats to help them lobby the Trump administration in hopes of pressuring the Saudis and other countries to end the blockade. To further enhance its relations with the United States, Qatar announced a $12 billion arms deal with Washington in June 2017 to purchase F-15 fighter jets.

Among those whom Qatar enlisted for help in Washington was retired Marine Gen. John R. Allen, the former deputy commander of U.S. forces in the Middle East. According to an FBI affidavit filed in federal court in April, federal agents are investigating whether Allen lobbied the Trump White House on Qatar’s behalf in 2017 without registering with the Justice Department as a foreign agent, and later lied to U.S. authorities about his ties to the Qataris.

Allen has denied wrongdoing. A spokesman for the retired general said Allen has voluntarily cooperated with the investigation and received no fees from Qatar.

U.S. officials redacted the identities for Burbage and Kirkland from the documents, but other details match their online biographies.

All five retired officers with Global Alliance Advisors applied for federal authorization to consult for the government of Qatar in March 2018. Three months later, they were joined by Rank, the one-star Army general. In his application, Rank sought permission to advise the Qatari defense minister while working for Global Alliance Advisors as its vice president for operations.

The Pentagon and State Department approved the requests in August 2018 but redacted other details from the documents. Fallon and Kohler declined to comment. Miller, Burbage and Kirkland did not respond to messages.

The proposed $23.6 million deal between Qatar and Global Alliance Advisors never materialized, according to Mary Beth Long, another co-founder of the firm, who served as an assistant secretary of defense during the George W. Bush administration.

Long initially agreed to a phone interview to discuss the company’s work with Qatar. But she ended the interview after being asked about Rank’s affiliation with the firm and other questions, saying she would respond further only in writing.

Jennifer Huber, an attorney representing Long, said in a letter that the government of Qatar decided not to award the proposed $23.6 million consulting contract to Global Alliance Advisors. She called the offer “premature.”

Huber said the firm later carried out a year-long, $600,000 consulting project for Qatar’s Defense Ministry that was in “full compliance” with U.S. laws and regulations. The Qatari Embassy in Washington did not respond to emails seeking comment.

Huber said that Rank had discussed “a potential business relationship” with Global Alliance Advisors, but that it “never came to fruition.”

In the end, Rank took a different job shortly after he retired from the Army: as defense contractor Lockheed Martin’s chief executive for Saudi Arabia, another gulf country that had been in his policy portfolio when he worked at the Pentagon. Rank was not obliged to observe a cooling-off period with Lockheed Martin because he didn’t oversee contracts with the firm while he was on active duty.

Retired U.S. generals have also found their services in high demand in another gulf country: Kuwait.

David San Clemente, a retired two-star Air Force general, applied in April 2020 for federal permission to work as a strategic adviser for the government of Kuwait, documents show. San Clemente was a familiar face in Kuwait. From 2016 to 2018, while he was on active duty, he headed the office of military cooperation at the U.S. Embassy in Kuwait City.

U.S. officials approved San Clemente’s request to take the job in July 2020. He did not respond to messages seeking comment.

San Clemente negotiated his contract with Kuwait through his advisory firm, S10 Consulting LLC. He did not disclose his pay to the Army.

The Army redacted their compensation details from the documents. None responded to requests for comment. Officials with the Kuwaiti Embassy in Washington also did not respond to a request for comment.