Crystal meth pours into Iraq across porous borders with Iran 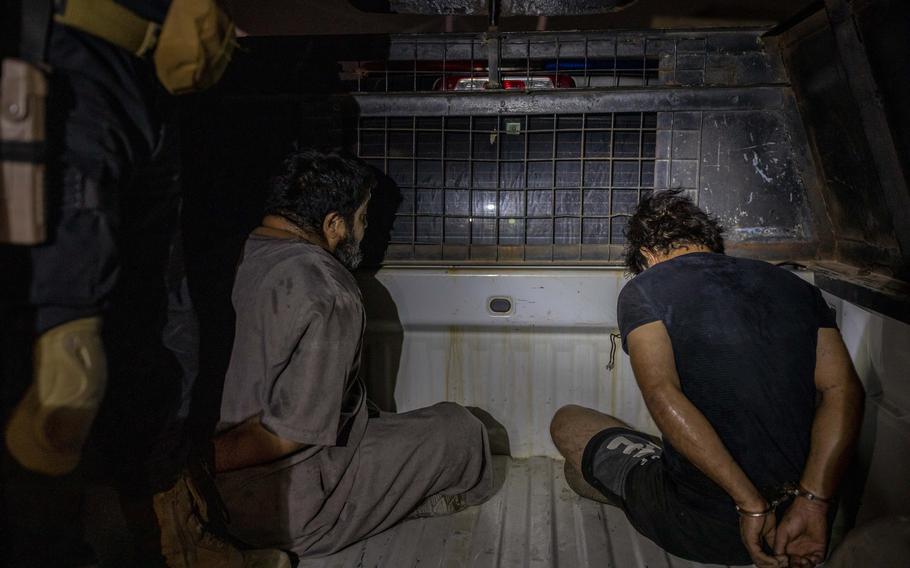 Suspected drug dealers sit in handcuffs following their Aug. 18 arrest in Basra, Iraq. The drug trade in Iraq is protected by powerful armed groups, some of them linked to Iran, as well as tribal networks and corrupt officials, according to Iraqi security, border and judicial officials. (Younes Mohammad/for The Washington Post)

BASRA, Iraq — Inside the dilapidated headquarters of Basra's drug unit, the colonel's stack of case files rarely shrinks. Yet every night below the flickering fluorescent lights, chatter thrums before a new round of raids.

Iraq is in the throes of an addiction epidemic as parts of a generation impoverished by war and neglect is turning to the drugs that are now flooding the country. Basra's understaffed and underfunded counternarcotics squad is overwhelmed.

At the center of this blight is the cloying heat and crushing poverty of Basra, where jail cells are full and dealers have police on their payroll so kingpins remain untouched. But the origins are far away, in the cool mountains of Afghanistan and the underground laboratories of Iran where new supplies and techniques have led to a flourishing trade.

"We have a disaster here," said Col. Ehab, a career intelligence officer who was directing the house raids on a recent night. He spoke on the condition that only his first name be used over concerns for his security.

Since the 2003 U.S.-led invasion opened Iraq's border with Iran, there has been a constant flow of people, religious pilgrims, trade — and smuggling, including of drugs. But it was around 2017 that a new menace appeared: crystal meth.

A domestic crackdown on Iran's own growing drug problem was making the basic ingredients difficult to come by when producers in Afghanistan unlocked the secret to extracting a key component of methamphetamine, ephedrine, from the local ephedra plant.

Today, the fruits of that discovery are found throughout the region.

On the night that Washington Post reporters accompanied Basra's drug squad on its raids, there were almost 700 people crammed into the unit's three holding cells, built for 200 in total.

As Ehab and his drug squad snaked toward the shanty districts on Basra's northeastern edge, they worried that their nightly arrests were only magnifying the problem, as dealers used their time on the inside to recruit more people.

Seizures of crystal meth from Afghanistan and Iran have increased dramatically across the Middle East in recent years, according to regional officials and experts, as it has followed the well worn path of the older opium and heroin trade.

In Turkey, security forces seized more than 5 1/2 tons of methamphetamine last year with raids along the Iranian border and in Istanbul. In just the first seven months of 2022, the number jumped to 8.6 tons.

Turkish authorities report that the smuggling network involves Iranian nationals with links to domestic organized crime networks, and parts of the supply are intended for onward shipment to the European Union, Southeast Asia and Australia.

Jordan anti-narcotics department, meanwhile, reported seizures of methamphetamines soared to more than 45 tons in the first nine months of 2022 — more than 20 times more than the same period last year. 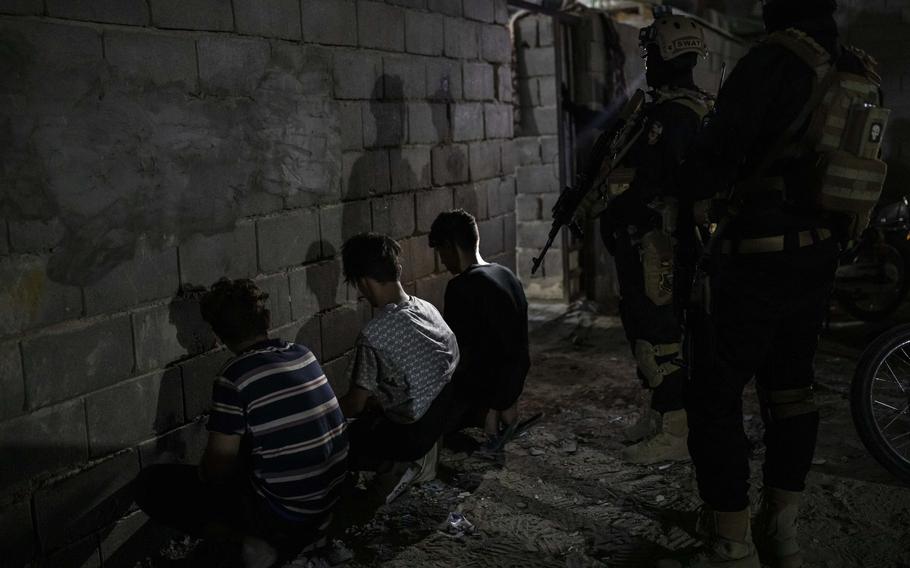 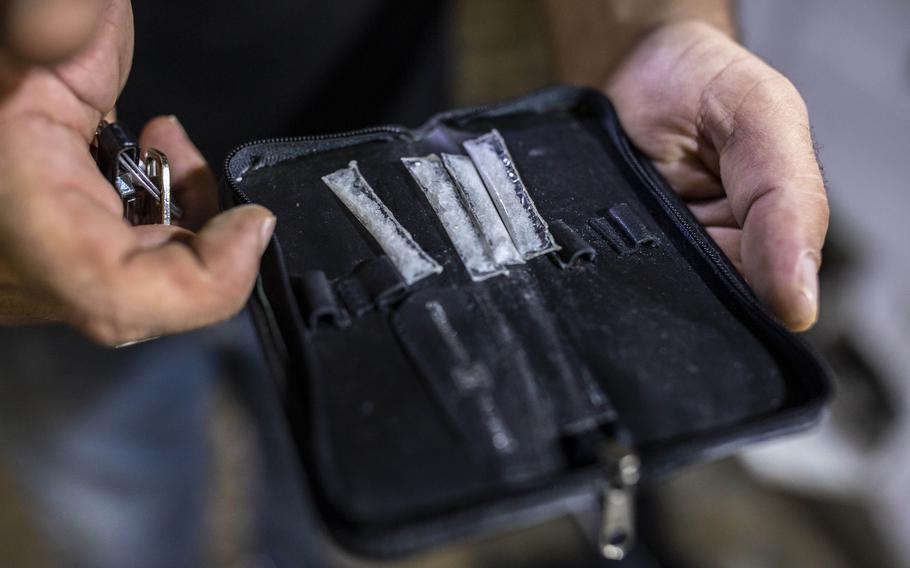 Drugs found in the home of a dealer during a nighttime operation in Basra on Aug. 18. (Younes Mohammad/for The Washington Post) Officers of an anti-drug unit search the house of a drug dealer in Basra on Aug. 18. (Younes Mohammad/for The Washington Post)

"[The year] 2017 was a game changer," said David Mansfield, an expert on Afghanistan's illicit economy whose work draws from fieldwork and aerial imagery. Local producers shifted from using over-the-counter medicines — used in the rest of the world to make ephedrine — to the widely available ephedra, growing wild on Afghan hillsides.

"Suddenly you've got this new player on the block that is producing methamphetamine at half the price," Mansfield said.

With a booming market for the drug already existing in Iran, the producers decided to start using the cheaper materials imported from Afghanistan, said Alexander Soderholm, an analyst at the European Monitoring Center for Drugs and Drug Addiction.

"So the logic is effectively: why don't we outsource all this to let us focus on the distribution side of things and also possibly production for external markets," he said.

The sudden surge in crystal meth supplies was soon spilling into Iraq where decades of conflict, corruption and dysfunctional governance have left the country in crisis.

Reports of drug seizures top news broadcasts almost daily. While the reported annual seizures of hundreds of kilograms are likely a deep undercount, even these numbers are doubling every year.

The trade is protected by powerful armed groups, some of them linked to Iran, as well as tribal networks and corrupt officials, according to Iraqi security, border and judicial officials.

"We've had officers arrested for this. They covered for criminals and they were on the dealers' monthly payrolls," said Ammar Shaker Fajr, a judge in Basra's Third Investigative Court.

In February, gunmen killed a senior judge in next-door Maysan province. In September, a general from the region's anti-drug squad was shot dead outside a restaurant.

Basra's drug squad is receiving a growing tide of threats, too. "There are days I just think about quitting," Ehab said. "I already feel like a dead man."

The flow of drugs is accelerating what civil society workers and health officials describe as a growing crisis of despair among Iraq's youth.

Public services have been ruined by corruption and mismanagement, and unemployment is rising as the farmlands dry up and cities offer little succor.

"Our young people want an escape but they don't understand what they're taking," said Enas Kareem, the founder of Iraq's only charity dedicated to helping users. She said there are no solid figures for addiction rates, but some officials estimate that up to 40 percent of Iraqi's youth in some areas have tried drugs. 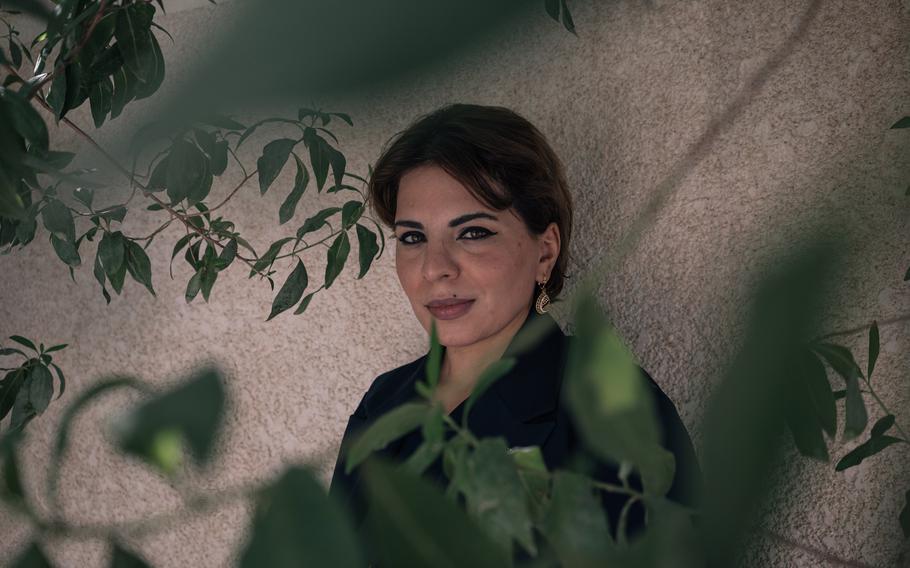 Enas Kareem, founder of Iraq’s only charity dedicated to helping drug users, poses for a portrait in Baghdad on Sept. 19. (Alice Martins/for The Washington Post) 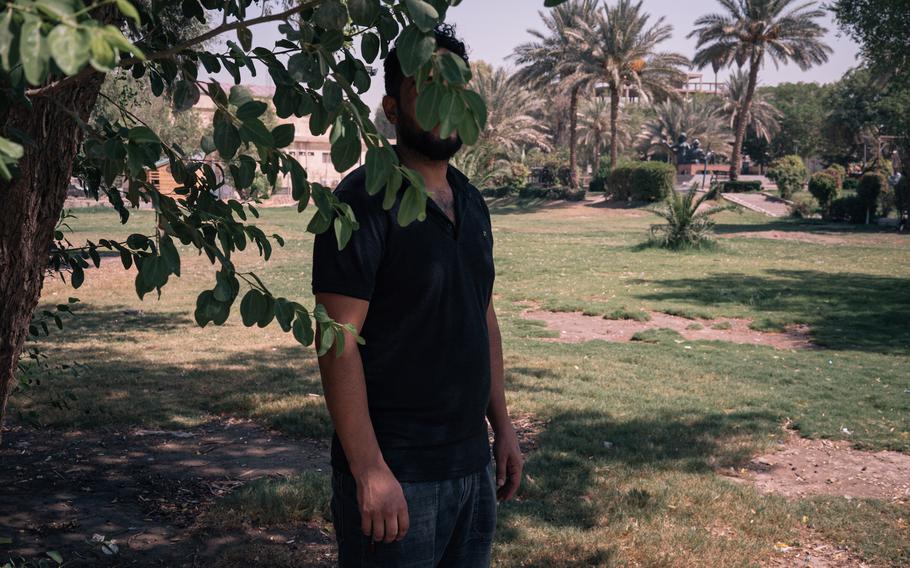 Maher, a 30-year-old baker in Baghdad, says he turned to drugs and alcohol because of crippling loneliness following the death of several family members. (Alice Martins/for The Washington Post)

Crystal meth floods the user with a sense of euphoria and invulnerability. When addiction sets in, paranoia takes over and the immune system breaks down as organs are pushed to failure.

In many cases, former addicts say that they started using drugs as solace from troubled lives. They spoke on condition that only their first names be used, due to the social stigma that comes with addiction.

Maher, 30-year-old baker in Baghdad, said that he fell in with the crowd that introduced him to alcohol and amphetamines after growing cripplingly lonely at home. His sister was killed during the U.S. invasion, his brothers during the subsequent sectarian civil war, and his parents, three years later, in a car crash.

In Basra, a 37-year-old taxi driver, Firas, was struggling to stay awake on long journeys when a dealer showed him a white powder — it turned out to be methamphetamine — that he promised would unlock the secret to longer work hours and better earnings.

He used for three years before his wife begged relatives to intervene after he began physically assaulting her, he said.

In recognition of the growing problem, a law was passed in 2017 ordering the establishment of government-run rehabilitation facilities for addicts within the next two years, but five years later there are only three across the whole country, and only one in Basra.

"Say we have 30,000 addicts in Basra, and there are just 22 beds in which the patients need three months each to recover. Well, how does anyone get a place in those beds?" asked Gen. Ismail Ghanem, the head of Basra's anti-drug unit.

When Firas went to bed at night, he'd ask himself whether he could ever stop using. When he woke in the morning, he would buy his next dose from the taxi hangar, where he worked.

He said that it was a volunteer with Kareem's charity who saved him. The young man, Hassan Majeed al-Maliki, visited and said the nearby hospital had a spare bed.

And if there hadn't been a bed?

"Then, I tell them that there is nothing we can do," Maliki said.

Below the chandeliers of a luxury hotel in Baghdad in June, officials from all major ministries outlined their thoughts for how to tackle the crisis at its root. They spoke of the need to provide young people with spaces for sport and social activities, of the need to improve the education system and launch awareness campaigns. But no further action was taken in the months that followed, as political factions squabbled over the shape of a new government, preventing ministries from carrying out any new initiatives.

"Iraqis are very good at talking, but where's the action? We don't see it," Ghanem said. "All we do is arrest people."

That is precisely why many of Maher's friends have been scared to seek help for their addiction. "If they arrest someone taking drugs, they will beat the crap out of them," he said.

The drug squad's first target was down an unpaved road without streetlights. They said that an informant had identified the location, and when the SWAT team stormed out with guns readied, a man in his 40s surrendered without a fight. Inside his one-story house, the unit found dozens of small pouches containing a white crystal-like substance that the officers believed to be meth, a set of small measuring scales and a loaded gun in each of the three rooms. 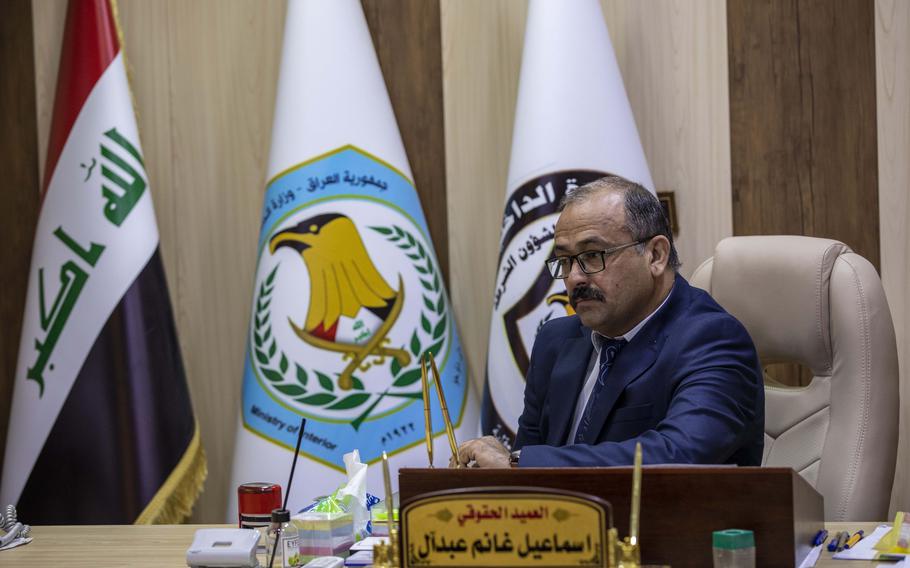 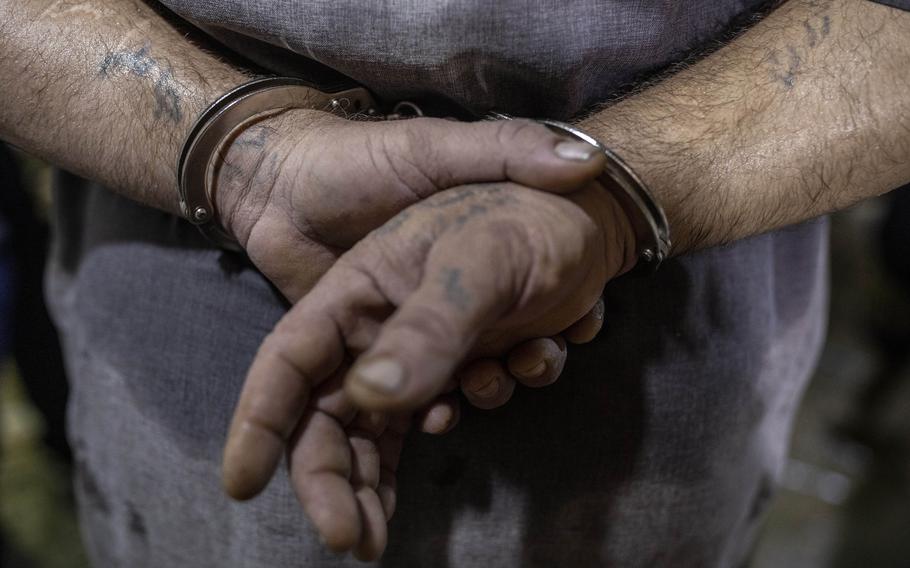 A suspected drug dealer is arrested in Basra on Aug. 18. (Younes Mohammad/for The Washington Post)

But at a house several districts to the north, the scene grew messier. Two women were already screaming obscenities at the police force by the time they reached the front gate. Four young men were pulled out for questioning, and a 17-year-old with messy hair was sobbing.

Inside the house, an officer found three tabs of captagon, an amphetamine, and one of the women began pleading with him. "It's not drugs, it's for his injury," she kept saying.

Around the corner, another officer was scrolling through the teenager's phone as the boy nodded frantically through his tears. The unit later said that he had been asked to cooperate with future investigations — a new informant to fuel the cycle of arrests.

It was past midnight by the time the convoy finally finished for the night. The streets were empty and the vehicles drove fast now, gliding down the highways and making sharp turns on street corners hung with pictures of the clerics and politicians.

Back at the station, the suspects were placed in a holding cell and brought for interrogation one by one. Last up was Moslem Dawoud, the alleged dealer whose home, police said, contained 16 doses of crystal meth. He kept his eyes on the floor for the most part and had stopped protesting his innocence.

An officer looked down at a faint tattoo on the man's forearm and asked if he'd been in prison before. Dawoud nodded.

"We can help you, you know," the officer told him.

Downstairs, the yells of other prisoners were floating out through the night air. After a long silence, Dawoud shared what he said was the name of his dealer.

Ehab looked down at the stack of case files on his desk.

"It's like this every night," he said blankly. "You do the raids, you do the paperwork, you're in a loop. Then you lie down, you wake up and you start again."