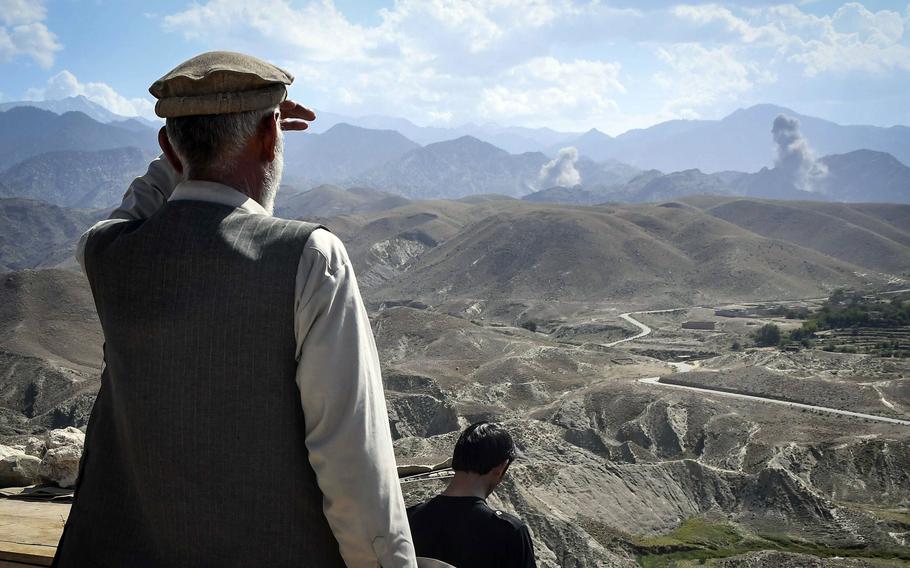 An Afghan policeman watches the aftermath of strikes by U.S. F-16 jets against Islamic State fighters in Nangarhar province, Afghanistan July 7, 2018. The number of declared U.S. military airstrikes around the world in 2021 fell to the lowest total since 2006, said a report published by May 10, 2022 by the London-based nonprofit group Airwars. (J.P. Lawrence/Stars and Stripes)

The number of declared U.S. military airstrikes around the world last year declined to the lowest total since 2006, a recent report by an international monitoring group said.

The civilian death toll from U.S. airstrikes also fell as a result of the end of combat missions in Iraq and Afghanistan, according to the report, which was published Tuesday by the London-based nonprofit group Airwars.

The U.S. Air Force launched 500 airstrikes in Afghanistan, Iraq and Syria in 2021, compared with 915 such missions in 2020, public data from the service says.

But additional airstrikes may be undeclared, said the Airwars report, which accused the U.S. military of not being transparent about collateral damage to civilians.

“U.S. assumptions of low civilian harm from its own actions in recent conflicts remain highly problematic,” the group’s director, Chris Woods, said in a statement in the report.

The number of aerial campaigns over Afghanistan, Iraq and Syria spiked in 2017, the first year of Donald Trump’s presidency, before falling over the course of his term.

Estimates of the number of civilians killed by U.S. drone strikes vary widely between independent monitoring groups and the military’s own assessments.

The Pentagon’s policies on assessing whether its missions are hurting civilians need reform, according to a January report by Rand Corp., a nonprofit research group that contracts with the Defense Department.

The U.S. does not sufficiently reach out to external sources such as witnesses or reporters, instead depending on its own unreliable technological tools before assessing its culpability, the Rand report said.

The Airwars findings regarding civilian casualties from U.S. airstrikes dovetail with those of a New York Times investigative series last year. The newspaper found that airstrikes in Afghanistan, Iraq and Syria killed civilians whom the U.S. had declared to be militants, and that the process for determining culpability was flawed.

The Times was awarded the Pulitzer Prize in international reporting Monday for its series “Airstrikes Gone Wrong.”

On Tuesday, Pentagon spokesman John Kirby acknowledged the reporting by the Times and congratulated the newspaper on its award for the series.

“We’re trying to learn from those mistakes,” Kirby said. “And we knew that we weren’t always as transparent about those mistakes as we should be.”