Suicide bombing at Kabul airport that killed 13 US troops was unstoppable and included no other attackers, investigation reveals 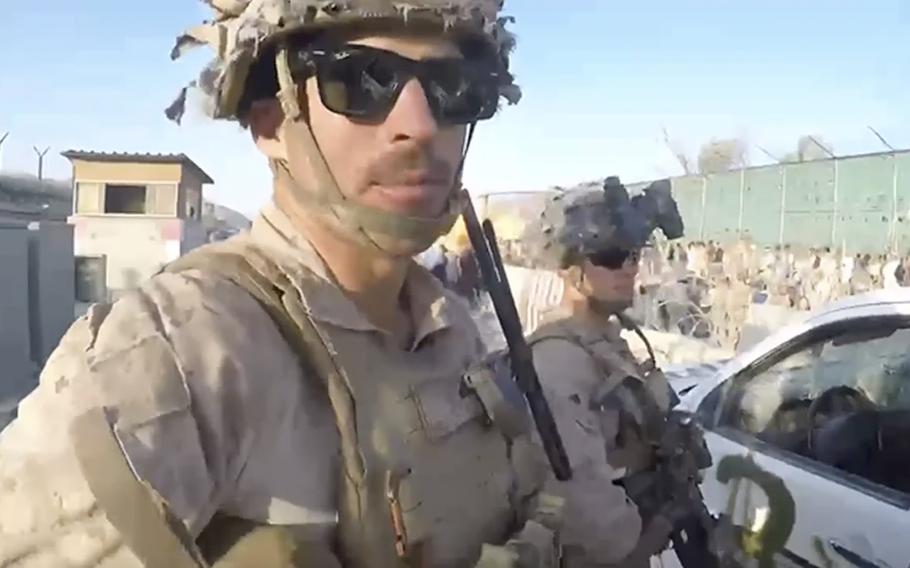 This image from a video released by the Defense Department shows the explosion, behind the two U.S. Marines in the foreground, by a suicide bomber at Abbey Gate outside Hamid Karzai International Airport on Aug. 26, 2021, in Kabul Afghanistan. The military investigation into the deadly attack during the Afghanistan evacuation has concluded that a suicide bomber, carrying 20 pounds of explosives packed with ball bearings, acted alone, and that the deaths of more than 170 Afghans and 13 U.S. service members were not preventable. (Department of Defense via AP)

WASHINGTON — The suicide bombing in August at the Kabul airport that killed 13 American troops in the final days of the U.S. war in Afghanistan was not supported by terrorist gunfire and the attack could not have been prevented, the top general in charge of military operations in the Middle East said Friday.

A lone fighter for Afghanistan branch of the Islamic State, known as ISIS-Khorasan, set off a single bomb at about 5:36 p.m. that day, which is counter to initial reports that multiple terrorists fired shots on the crowd immediately following the blast, Marine Gen. Frank McKenzie said during a news briefing at the Pentagon.

The new information comes after a team of military leaders conducted an investigation that included expert analysis and testimony from more than 100 people, he said.

“While nothing can bring back the 11 Marines, the soldier and the sailor that we tragically lost in this attack, it's important that we fully understand what happened,” said McKenzie, the commander of U.S. Central Command. “Their sacrifice demands nothing less.”

The bomb blast “direct[ed] ball bearings through a packed crowd and into our men and women at [the] Abbey Gate” of Hamid Karzai International Airport in Kabul, he said.

“The disturbing lethality of this device was confirmed by the 58 U.S. service members who were killed and wounded despite the universal wear of body armor and helmets that did stop ball bearings that impacted them but could not prevent catastrophic injuries to areas not covered,” McKenzie said. 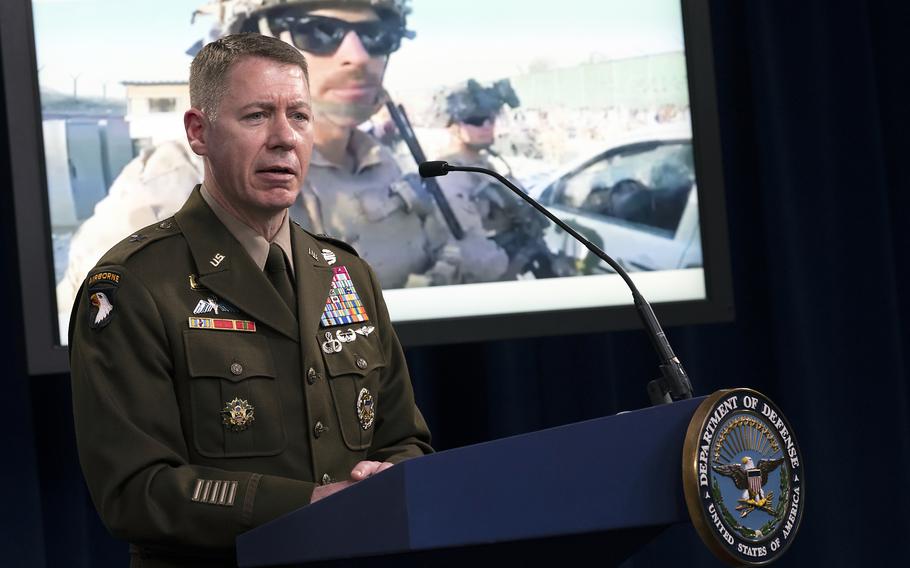 McKenzie told reporters in August after the attack that U.S. troops returned fire at enemy fighters shooting into the crowds following the explosion. Investigators later found this was untrue by reviewing witness accounts, video and “findings and analysis of medical examiners and explosive experts,” he said Friday.

“The best information we had in the immediate aftermath of the attack indicated that it was a complex attack by both a suicide bomber and ISIS K gunman,” McKenzie said. “The investigation found no definitive proof that anyone was ever hit or killed by gunfire, either U.S. or Afghan.”

The initial false reports partially stemmed from “instant chaos and sensory overload” in the immediate aftermath of the attack, said Marine Corps Col. C.J. Douglas, who assisted with the investigation.

For example, rounds of gunfire from warning shots after the attack added to the confusion, and ball bearings from the explosive device caused injuries resembling gunshot wounds, McKenzie said.

“We now know that the explosively fired ball bearings caused wounds that look like gunshots and when combined with a small number of warning shots led many to assume that a complex attack had occurred.”

Furthermore, Marines at the scene fought through tear gas as they responded to the “mass casualty event,” Douglas said.

“Several interviews discuss the presence of tear gas, which was released when the [tear gas] canisters worn on the Marines equipment were punctured by ball bearings from the blast at this point.”

Video that the Pentagon released Friday of the scene following the attack shows troops running toward the explosion site as others run away carrying blast victims on their shoulders.

Other photos and video taken before the blast and released Friday show hordes of hopeful Afghan evacuees standing “shoulder-to-shoulder, chest-to-back” where the explosion would take place, said Marine Lt. Col. John Naughton, who also assisted with the investigation.

“The [images] show how densely packed the canal was on [Aug. 26] and this gives you an idea why there were so many casualties as a result of the attack,” he said.

The attack was “not preventable,” as senior leadership on the ground followed protocol with threat warnings throughout the two-week evacuation mission, said Army Brig. Gen. Lance Curtis, who led the investigation.

“The leaders on the ground followed the proper measures,” he said. “Anytime there was an imminent threat warning, they followed the proper procedures, they lowered their profile, they sought cover, and at times, they even ceased operations at the gate.”

Several top leaders, including multiple company commanders, the 82ndAirborne Division commander, the 24thMarine Expeditionary Unit commander, were on the ground during the attack. The 2ndBattalion 1st Marine Regiment battalion commander was also there and was wounded in the blast.

“The reason that we were leaders who were on the ground throughout the course of the day on the 26this because again, it's understanding the hazards of our chosen profession and knowing that the leaders need to be on the ground to share those same hardships with their subordinates,” Army Lt. Gen. Ron Clark, who also assisted in the investigation.

The investigation also revealed the Taliban was not involved in the attack, nor did they “threaten U.S. personnel physically,” Clark said.

“We refer to the Taliban as unlikely partners [because] leading up to the time when we asked them to partner with us on the 16th of August, we were conducting kinetic attacks against the Taliban," McKenzie said.