Taliban ask China for help in getting international recognition 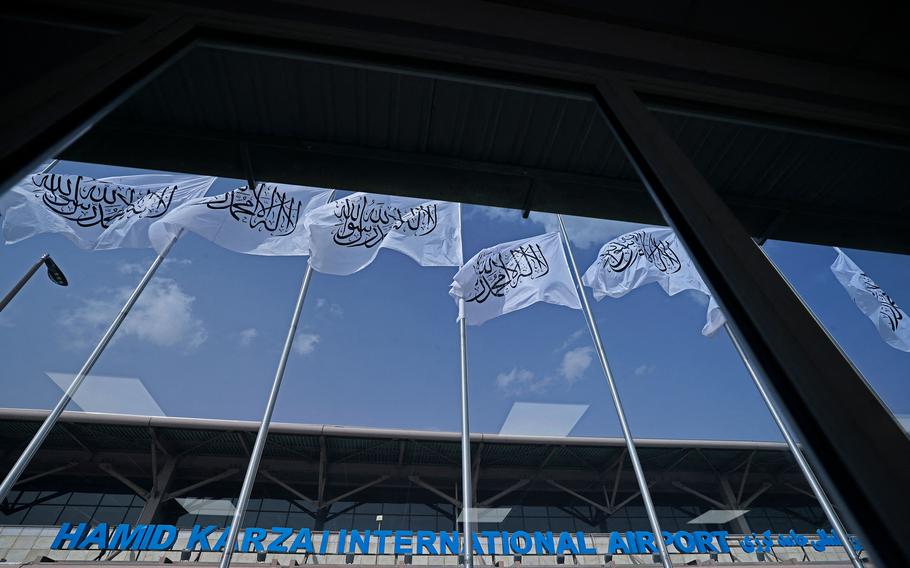 The Taliban flags installed at the Hamid Karzai International Airport are pictured in Kabul on Sept. 11, 2021. (Karim Sahib, AFP via Getty Images/TNS)

(Tribune News Service) — The Taliban are seeking China’s assistance in getting its Islamic Emirate government officially recognized by the international community, a crucial step that could help Afghanistan access some $9 billion in frozen reserves held overseas.

“All of the conditions of the international community required for recognition are already fulfilled,” Bilal Karimi, a deputy spokesman of the Taliban, said by phone Monday. “The Islamic Emirate wants China to take the lead to help the current government achieve international recognition.”

The U.S., its allies and even Russia and China have yet to recognize the Taliban government due to concerns over continued links with terrorism as well as human rights abuses and banning girls’ education. Some of the Taliban’s cabinet members are blacklisted under U.S. and U.N. sanctions.

Since taking power in August, the Taliban have insisted they have made progress with pledges to let women study and work, preventing the country from being used for terror activities and forming an inclusive government. Meeting these conditions could have helped the group get closer to getting international recognition although in reality it has been difficult to achieve.

The sidestepping of the Taliban’s efforts to secure international recognition has made it difficult for the Afghan government to gain access to the reserves, which could have helped alleviate a cash crunch in Afghanistan. The United Nations has warned that more than half of the country’s population faces acute hunger and almost all Afghans could be living in poverty by mid-2022.

The Taliban’s acting Interior Minister Sirajuddin Haqqani met with China’s ambassador Wang Yu over the weekend, asking for China’s support in gaining official recognition. Both officials pointed the finger at the U.S. for blocking the Taliban’s access to the reserves held in American and European banks.

“The United States should not seek revenge against Afghans through economic sanctions,” Wang told Haqqani, according to a series of tweets posted by Taliban deputy spokesman Inamullah Samangani. Wang added that the U.S. “should not use the issues of inclusive government, human rights and freedom of expression as a tool or pretext” to pressure the Taliban.

Haqqani, who remains on the FBI’s most wanted list, thanked China for its direct and continued humanitarian assistance to the Taliban government and urged Beijing to “cooperate with Afghanistan in recognizing it.” Wang said in a tweet after the meeting that China respected the Taliban for pursuing its own government based on cultural and religious values, without making commitments.

The U.S. said last month it would bypass the Taliban and expand the ways humanitarian aid groups can help ease a rapidly worsening food crisis. The plan was to directly inject cash into Afghanistan’s economy while circumventing Taliban-controlled government ministries.

The move came before the U.N. made its latest funding plea of a record $5 billion in aid that would reach more than half of the Afghanistan’s 40 million people to “address immediate and catastrophic levels of need.” The U.S. too had planned to give $308 million in aid to the country.