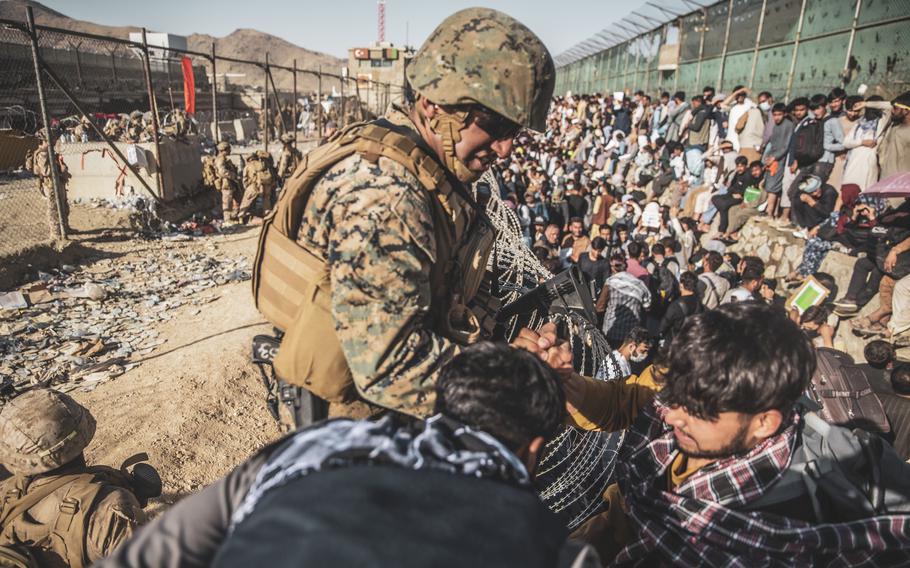 Since Feb. 29, 2020, when the agreement for the withdrawal of U.S./NATO troops from Afghanistan was signed, and most notably since the fall of Kabul, a host of specious narratives have emerged. Despite the lack of evidence to support certain narratives, they manage to take hold among those whose interests are aligned with the agendas furthered by those narratives.

Specious narratives are being peddled by those with an agenda to:

—Create a justification for demands for reparations or corrective action through intervention.

—Stoke hatred as a unifying force to create momentum behind a movement.

—Bolster the claims of legitimacy of a movement or further other political interests.

With an awareness of the agendas that drive these narratives and the evidence which vitiates them, it becomes possible to lay bare some of the realities governing the state of play in Afghanistan, making way for a more clear-eyed assessment of options for a viable path forward.

The U.S. betrayed Afghanistan by making a deal with the Taliban.

There has been much ado about the fact that the U.S. struck a deal with the Taliban and excluded the Government of the Islamic Republic of Afghanistan (“GIRoA”) from the Feb. 29, 2020 (“Doha”) Agreement. Many of those who characterize this change of course as an act of betrayal argue that the GIRoA should have been party to an agreement for a conditions-based withdrawal of U.S./NATO troops that would ensure that the interests of the GIRoA are protected.

As far back as 2017, it was acknowledged by both U.S. officials and the secretary-general of the United Nations that there was no military solution to the conflict in Afghanistan, and that some unsavory compromises would have to be made to reach a negotiated settlement. Over the years, the Taliban had been consistent in their messaging, vowing to keep up the fight till the Republic was dissolved to make way for the formation of a new government through intra-Afghan dialogue and negotiations. Yet, neither Ghani nor any other high-profile Afghan stepped up in the years preceding the withdrawal, not even after the signing of the Doha agreement in February 2020, to facilitate a public dialogue (possibly through a “loya jirga”) to determine if any consensus could be reached (by plebiscite, possibly) on restructuring the government to accommodate Taliban demands and bring an end to their military offensive.

Even after President Joe Biden’s April 14, 2021, announcement of the withdrawal of troops by Sept. 11, 2021, rather than make concessions, Ghani threw down the gauntlet in his May 4 Foreign Affairs piece, demanding that the Taliban agree to a comprehensive ceasefire and negotiate with the GIRoA to reach a political settlement for “the integration of the Taliban into … government.” Ghani declared that “the structure of the Republic must remain intact” and intimated the existence of a military solution, threatening that “if the Taliban still refuse[d] to negotiate, they [would] be choosing the peace of the grave.”

The saber-rattling and issuing of demands seemed completely absurd, seeing as there was absolutely no reason to expect the Taliban to concede one of their key demands when they were in a dominant position on the battlefield and gaining leverage by the day as the withdrawal of U.S./NATO forces drew closer. Yet, Afghans and internationals alike rallied behind Ghani’s call for a cease-fire, eschewing a rational course of action governed by an assessment of the power dynamics at play, and choosing instead the course of action of reckless abandon to an emotional response fueled by hubris and righteous indignation.

It would be unreasonable to expect the U.S./NATO to have backed the demands of Ghani/the GIRoA with the threat of military force through a conditions-based withdrawal agreement when it had already been determined that there was no military solution. Once it was acknowledged that this was the case (in 2017), and especially once the withdrawal of troops was announced (in February 2020) and then confirmed (in April 2021), it was up to Afghans to take the lead on intra-Afghan negotiations to reach a negotiated settlement with the Taliban. Unfortunately, leverage was squandered as the withdrawal drew closer and no action was taken.

The presence of 2,500 U.S. troops in Afghanistan was sustainable.

This narrative has been debunked again and again, yet still rears its head with great frequency. It is often said that the collapse of the Republic could have been averted if the remaining 2,500 U.S. troops had not been withdrawn, and that the status quo could have been maintained indefinitely with a light footprint. Those who make the case for the light footprint approach in Afghanistan argue that the costs are negligible seeing as there weren’t any combat deaths of U.S. troops in the year and a half preceding the Aug. 31 withdrawal, with the assumption being that the threat level would remain static.

It is worth noting, however, that the cessation of attacks on U.S./NATO troops coincided with the signing of the Doha agreement, which stipulated the cessation of such attacks; the date of the last combat deaths of U.S. troops (Feb. 8, 2020) was just weeks before that of the signing of the Doha agreement (Feb. 29, 2020). The agreement also stipulated the departure of all U.S./NATO troops, and in January 2021, the deputy head of the Taliban team that negotiated the Doha agreement warned that “if U.S.-led forces remain in Afghanistan after the … deadline, “we will also kill them.”

As Biden and many others have noted, reneging on the Doha agreement to keep boots on the ground would have triggered the resumption of attacks on U.S./NATO troops, creating the need for a surge of troops. A light footprint was not and is not an option, and a surge of troops is an option that makes little sense given that this course of action was rejected as far back as 2017, when some U.S. officials acknowledged that there was no military solution: “Some U.S. officials … questioned the benefit of sending more troops to Afghanistan because any politically palatable number would not be enough to turn the tide, much less create stability and security.”

The U.S. handed over Afghanistan to the Taliban.

This narrative has gained a foothold and often intimates malign intent on the part of the U.S., though it is not clear what benefit the U.S. could possibly reap from a return to Taliban rule. Once it was determined that there was no military solution and the U.S. negotiated with the Taliban to ensure an orderly retrograde, the U.S. continued to throw its weight behind Ghani and the Republic, pledging ongoing diplomatic and humanitarian support, as well as funding for the government and the Afghan National Defense and Security Forces (ANDSF). Biden also voiced support for intra-Afghan dialogue to negotiate the terms of a modus vivendi, and indicated that he had “directed the Secretary of State to support President Ghani and other Afghan leaders as they seek to prevent further bloodshed and pursue a political settlement.”

Biden noted that “it’s up to the people of Afghanistan to decide on what government they want,” and Ghani, for his part, embraced the newfound sovereignty of the Republic in his Foreign Affairs piece, framing the withdrawal of U.S./NATO troops as an opportunity: “The withdrawal also represents an opportunity for the Afghan people to achieve real sovereignty. … Soon … all decisions regarding military approaches to the Taliban … will be made by the Afghan government.” Unfortunately, Ghani’s refusal to accept that there was no military solution proved fatal for the Republic. His decision to engage in saber-rattling rather than consensus-building through compromise was ill-fated, and Kabul was surrounded by Taliban fighters just a little over three months later.

On Aug. 15, 2021, the siege of Kabul played out on live television. It was reported that a Taliban delegation was inside the presidential palace, and that Taliban fighters were standing by on the outskirts of Kabul awaiting the outcome of transfer of power negotiations at the palace. The former negotiations team member and international media spokesman for the Taliban, Suhail Shaheen, was being interviewed live on Al Jazeera English and indicated that the Taliban did not want to enter Kabul by force, and that they were prepared to stand by for “a day, two days, [or] a week” to negotiate a peaceful transfer of power. However, within a matter of hours, it was reported that Ghani had fled, handing over the keys to the Presidential Palace to the Taliban, in effect.

Sasha Kassam is an education professional (democracy & human rights, English Language) with a background in philosophy. She has worked for the U.S. Department of State, USAID, and the Department of Foreign Affairs and International Trade/Global Affairs Canada, and has worked and/or lived in Canada, the U.S., Afghanistan, Burma/Myanmar, Indonesia, Japan, France, Zaïre/DRC and the U.K.. She is currently in Canada and writing a book, ”Prelude to a Thesis on Democracy-Building: Afghanistan Case Study.”