by
Susannah George and Karen DeYoung
• The Washington Post • November 28, 2021 CHARASIAB, Afghanistan — At this town’s district hospital, an hour’s drive south of Kabul, midwives resorted to using mobile phone flashlights to deliver babies during power cuts, when foreign aid was halted and they could no longer pay for generator fuel.

When critical supplies such as saline solution and dressings ran out, many patients were turned away and told they would have to purchase such materials themselves.

“It was terrible,” hospital director Sharifa Noor said of the first time in her 17 years working here that she had to tell patients she was unable to care for them.

Early this month, a United Nations program gave the hospital a reprieve, with an influx of supplies and, equally important, cash to pay the salaries of its staff for the first time in months. Doctors working under Noor received about $150.

The lifeline was temporary, part of an experiment cobbled together by U.N. agencies with outside funds to prove to the international community that money could be distributed in Afghanistan without falling into the hands of the Taliban.

Before the militants took over in August, foreign donors — largely wealthy Western countries led by the United States — paid for up to 80 percent of all Afghan government expenses. Since then, donors have frozen all funding, as leverage to press the Taliban to meet demands including rights for women, girls and minorities, an inclusive government, and freedom from reprisals and of movement.

The Biden administration and allied governments are debating whether the experimental U.N. program — which targeted only a portion of Afghanistan’s health care system — or similar initiatives can be expanded into other parts of the economy.

“We are also deeply concerned by the ongoing liquidity shortage, inflation and other economic factors,” Jeffrey De Laurentis, deputy U.S. ambassador to the United Nations told the U.N. Security Council last week. “We welcome creative solutions from the international community to help mitigate” these problems “in a way that limits undue benefits to the Taliban and sanctioned individuals.” 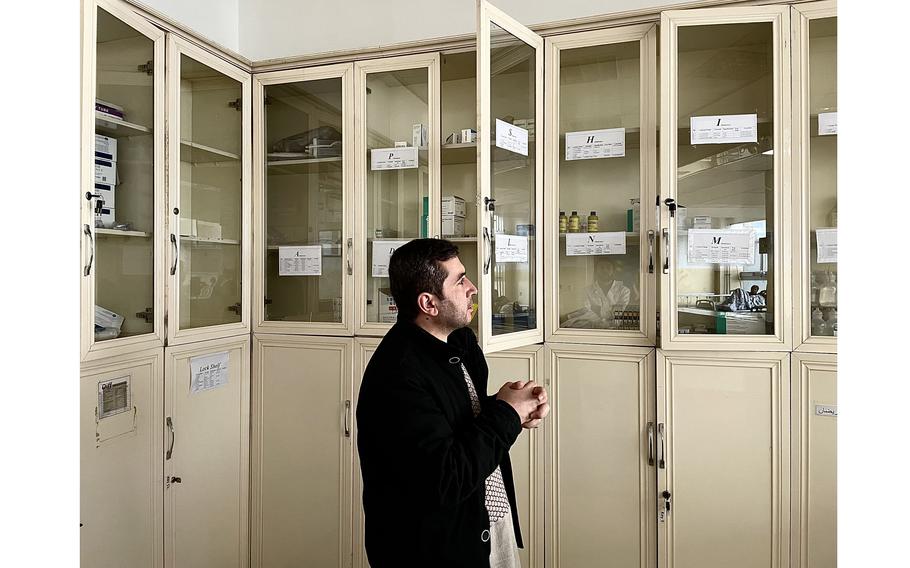 Mohibullah Barakzai, the chief doctor of Jumhuriat hospital's emergency room, says many patients were asked to purchase their own supplies after international aid funds to the facility were cut following the Taliban's takeover of the country. (Susannah George/The Washington Post)

None of the discussions so far involves releasing about $10 billion in Afghan government reserves, held primarily in the United States.

The largest single pot of foreign money is held by the World Bank’s Afghanistan Reconstruction Trust Fund, whose cash balance at the end of September stood at more than $1.5 billion. In the past, it has funded programs as diverse as providing grants for small businesses, supplying farmers with seeds and financing for short-term agricultural labor, and building and improving roads and irrigation systems.

Its distributions have now been frozen by the bank’s member states, none of which recognizes the Taliban government. The hope at the United Nations is that at least some of those funds can be released into a new U.N.-administered fund that would go beyond humanitarian food and medicine aid to Afghanistan to maintain basic services and pay salaries and wages. The fund is also asking countries with bilateral development aid programs in Afghanistan to repurpose that money — now also frozen — and come up with new donations.

Bank voting members are expected to meet next week to discuss the terms for allowing the release of some funds while ensuring that their demands are addressed — particularly on girls’ education — and adequate monitoring is in place.

But international humanitarian and development agencies are insisting, in increasingly dire terms, that time is running out and the lives of millions are at risk.

With virtually no money circulating, the United Nations, the International Committee of the Red Cross and other major aid operators have warned that more than half of Afghanistan’s population of 40 million is well on its way to “acute food insufficiency,” their term for starvation. “You really have to go there and meet with people inside Afghanistan ... to understand the depths of this crisis,” said Jan Egeland,secretary general of the Norwegian Refugee Council, one of the largest nongovernmental aid agencies still operating on the ground.

During a recent visit to the country, Egeland said in an interview, “I asked mothers in tents — how are you treated now? Are you discriminated against? Are your children in school?”

“They just stared at me and said ‘We have only one concern — not to freeze and starve to death this winter.’”

The absence of cash flow extends into virtually every part of the Afghan economy.

The public sector “is not first and foremost bureaucrats,” Egeland said. “There are also 300,000 teachers, thousands of health workers, water engineers, garbage collectors, electricity grid engineers,” all of whom are public employees who are not being paid.

International organizations charged with administering programs and providing services on the ground say they agree the Taliban must be held to their own pledges.

“But even if the Taliban in all corners of the country said yes to all our demands tomorrow,” Egeland said, “the crisis would be so deep that too many people will perish this winter unless there is a real change in policy from the Western countries on these fundamental issues” affecting a functioning economy.

With Washington immersed in political arguments over responsibility for the Taliban takeover, the chaos of the U.S. withdrawal in August, and ongoing efforts to evacuate U.S. citizens and at-risk Afghans, the internal collapse has drawn little notice.

“Members of the international community have focused understandably on helping those Afghans who want to leave,” Deborah Lyons, the U.N.’s special representative for Afghanistan, told the U.N. Security Council earlier this month. “But our attention must now turn to the vastly greater number of Afghans who remain in the country but face in the short term a most dire future.”

Afghanistan’s gross domestic product has already contracted 40 percent and fuel and food prices have skyrocketed. “Cash is severely limited. Traders cannot get credit,” and Afghans “can’t access their savings,” Lyons said. “An entire complex social and economic system,” including substantial public works the international community paid for in the first place “is shutting down,” she said, primarily because financial sanctions “have paralyzed the banking system.” A nurse attends to a patient in Kabul's Jumhuriat hospital's emergency ward that has run out of critical supplies like dressings and insulin following the near halt in aid to Afghanistan. (Susannah George/The Washington Post)

Dominik Stillhart, operations director the International Committee of the Red Cross, said that with little to no banking services available in Afghanistan, and sanctions largely prohibiting the entry of dollars into the country, organizations such as his have increasingly turned to informal systems, including hawala, in which money is deposited, usually in dollars, and then doled out in local currency, for a fee, by traders in Afghanistan.

The world has stepped up donations for direct humanitarian aid, almost completely funding a $606 million U.N. emergency fund to pay for food, medicine and shelter materials trucked and flown into the country.

But while “humanitarian aid is part of the solution,” Stillhart said, “it was never meant to replace a functioning economy and public service delivery”

The health care payment program spearheaded by the U.N. Development Program — which oversees and supports a network of 25,000 health care workers in 2,200 primary care clinics and small hospitals around the country — proved that money could flow into Afghanistan, Kanni Wignaraja, assistant UNDP administrator and regional director for Asia and the Pacific, said during a visit to Kabul this month.

The program used one of the few commercial banks still open to send direct payments to health care workers via cellphones — and delivered cash in person to those with no phone or account. Lists of workers every sector supported by international payments through the previous government remain intact and could be used to expand the experiment to teachers and other public sector employees, Wignaraja said.

“It’s clear that we have to avoid money going in through the de facto authorities. They know that. We know that. It can be managed,” she said. “These are the basic things that we take for granted ... schools, basic health clinics, the electricity grid, sanitation. These are not projects. These are nationwide systems.”

The health care distributions were “all done under this very short time frame,” during October and November, “but it showed end to end it works,” Wignaraja said, noting that the Taliban did not interfere.

While the UNDP program covered small clinics — some of which had already shut down — larger hospitals in Afghanistan are funded through the ICRC, which was not part of the UNDP experiment. Among them is Jumhuriat Hospital, one of the biggest in Kabul.

There, director Dr. Mohammadullah Alishungi said this week that if he cannot start paying salaries in the next month, he may lose up to half his employees by the end of the year. “Without staff, we cannot function,” he said, estimated that roughly 30 have already left, many fleeing the country.

Marghlai Muhammadi, a nurse in the hospital’s emergency room, spoke with passion of her work. But with no income, she said, she will be forced to leave in the coming weeks and find a way to support her family.

Compounding the problem, as supplies run low and doctors and nurses look to flee, large hospitals in cities like Kabul are seeing spikes in patients as health care and other systems collapse around the country and Afghans travel long distances for treatment.

“We receive more and more people in very critical conditions,” Mohibullah Barakzai, the emergency room’s chief doctor, said. But “by the time they get here, we can’t help them.”