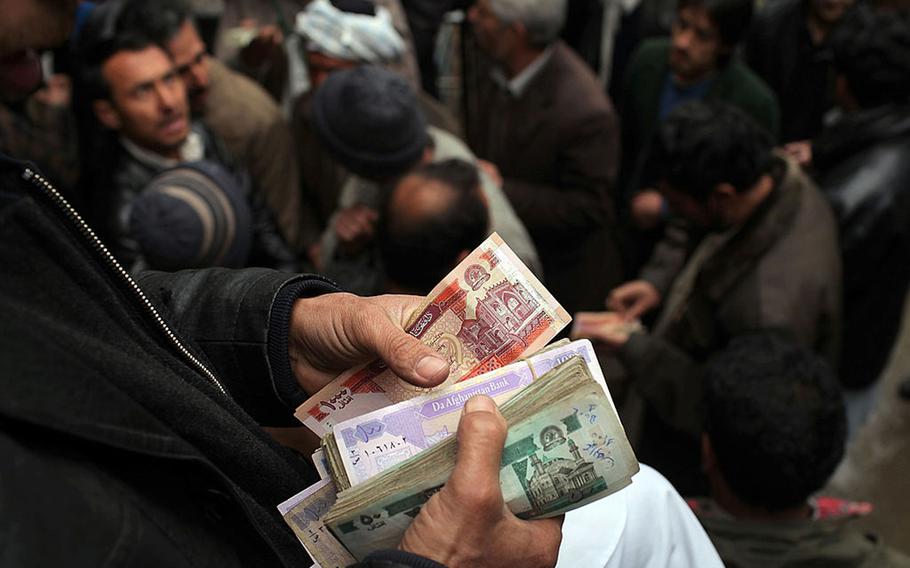 Men buy and trade currencies at a money market in Kabul, Afghanistan, in 2010. The country’s currency, the afghani, isn’t accepted for cross-border trade, thus the economy’s reliance on U.S. dollars and the hawala industry. (Spencer Platt/Getty Images/TNS)

The former U.S.-backed government of Ashraf Ghani was corrupt and damaged the country's economic situation, Hassan said in his first national address since assuming office. "the Islamic Emirate wants good relations with all countries and economic relations with them." Only the audio portion of the speech was broadcast on television.

The little-known Hassan, who assumed office in early September and previously headed the Taliban's leadership council, made the speech Saturday as the country reels under worsening poverty with its economy in shambles and prices of essential goods soaring.

The United Nations has said recently that more than half the country's nearly 40 million people are facing acute hunger, a million children could die as the harsh winter is setting in and warned by mid-2022 as much as 97% of the country could be living in poverty, up from about 72% in 2020.

The Taliban-led administration has blamed the U.S. for making an already critical situation worse by blocking the militant group from accessing some $9 billion of Afghan assets held in American banks..

Inflation was a matter of great concern, Hassan said. "If the Afghan money is released, all financial and economic problems will be solved."

A Taliban delegation led by their acting foreign minister Amir Khan Muttaqi is currently holding talks with U.S. officials in Doha, Qatar, to persuade them to release the money and resume humanitarian aid to the country.

The U.S. had blocked the assets on concerns about the militant group's continued links with terrorism, human rights abuses and failure to build an inclusive government.

Despite the Taliban's assurances of including women and minorities in its government, Hassan's 53-member cabinet is all male and comes from the ranks of the Taliban. It's dominated by ethnic Pashtuns, the majority group in the country.

Hassan defended his government, saying it respected women's right to education and work. "Today, women in Afghanistan are safe and no one can look down on them," he added.

While some schools and private universities have resumed teaching girls and women in segregated classrooms, the vast majority of Afghan girls from the sixth grade onward remain out of school. Women have also not returned to most government jobs. Only a small number of women in essential services like nursing have been asked to resume work.