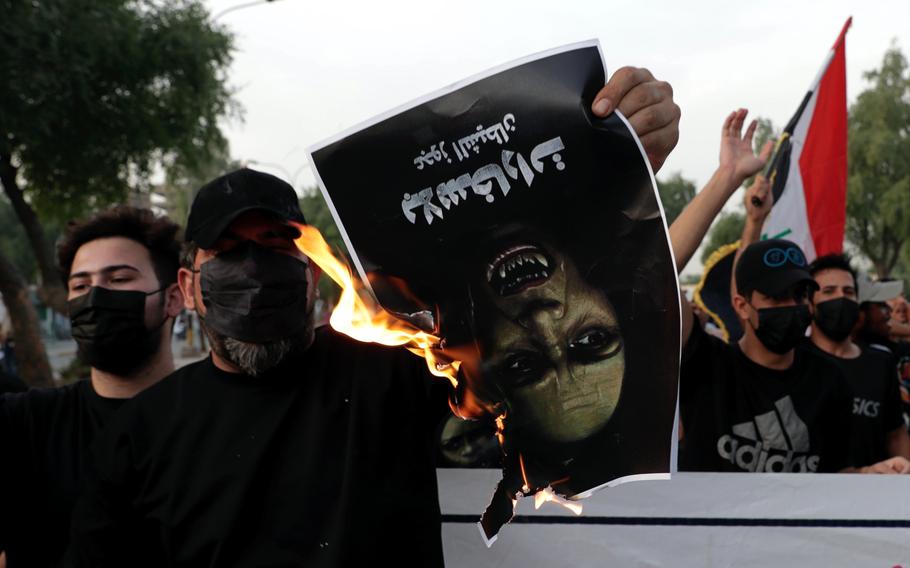 Protesters denounce election results and call for a manual recount of the Oct. 10 parliamentary vote as they burn a poster depicting the U.N. special representative to Iraq Jeanine Hennis-Plasschaert outside the heavily fortified Green Zone, in Baghdad, Iraq, Sunday, Oct. 31, 2021. Three weeks after Iraqis cast their votes, pro-Iran Shiite militias who emerged as the biggest losers are still rejecting the outcome of Iraq’s parliamentary election, thrusting the country into uncertainty and potential political crisis. (Khalid Mohammed/AP)

BAGHDAD - At least 125 people were injured Friday in Baghdad, according to Iraq’s Health Ministry, as supporters of Iran-backed armed groups gathered outside the fortified Green Zone complex to demand a recount of the country’s parliamentary elections.

The broad contours of Iraq’s Oct. 10 election results are not in doubt, but they were a surprise: As Shiite cleric Moqtada al-Sadr’s party emerged as the biggest winner, his expected main challenger - a powerful coalition of Iran-aligned groups - won more of the votes but saw its seats more than halved.

While the discrepancy appeared to have resulted from superior electoral strategy on the part of Sadr’s party, supporters of the coalition’s militia network had camped outside Baghdad’s Green Zone for several weeks, spending their shifts inside tents on the sidewalk or sitting out under banners that denounce Iraq’s election as fraudulent.

Built after the U.S.-led invasion of 2003, Baghdad’s gated Green Zone is a home to foreign embassies and government offices, and seen by many in Iraq as a symbol of the vested interests that have come to dominate the country’s politics.

Then on Thursday, the coalition decided to escalate the situation, announcing that supporters should storm the district, calling the demonstration Friday their “last chance.” When they did, arriving at two separate gates, security forces opened fire at protesters gathered to the east.

“We follow with great anger the hideous state of repression with which the government authorities deal with peaceful demonstrators,” said Hadi al-Amiri, the leader of the Iran-linked Fatah coalition which saw its share of the country’s 239 parliamentary seats fall from 48 to 16.

Qais al-Khazali, leader of the Asaib al-Haq group, condemned the violence and urged justice for the wounded demonstrators. “Whoever they were, they must be held accountable,” he said of the security forces.

Despite being fired upon, the protesters did not disperse. By late afternoon in an area to the south of the Green Zone, young men were pounding sections of the sidewalk into pieces, before hurling them at security forces. “Why are you just standing there,” one of the men called to others gathered. “Come and stone them with us!”

The Health Ministry said almost 100 of those treated for injuries were from the security forces.

Iraq’s military said Friday that Prime Minister Mustafa al-Kadhimi had ordered an investigation into the violence.

When asked by a reporter why protesters had not dispersed outside the Green Zone as security forces tried to push them back, militia representatives said that they had received orders for their cadres to stay put.

The international community has broadly endorsed the results of Iraq’s Oct. 10 election, saying it proceeded “smoothly” and with significantly less fraud on the day than in previous years. But the vote was marred by one of the lowest turnouts in the country’s history, reflecting widespread apathy and disillusionment at the depth of corruption and lack of accountability in a political system forged in the wake of the American invasion.

The country’s electoral commission began a partial manual recount of the vote last week, saying that, so far, initial results have stayed the same.

Iran’s influence is marbled throughout Iraq’s economy and political system, and it backs a network of powerful armed groups that make its authority clear in the corridors of power and out on the streets.

Human rights groups say that Iran and Sadr-linked militias have assassinated dozens of their critics in recent years, sending ripples of fear through an anti-government protest movement that toppled Iraqi Prime Minister Adel Abdul Mahdi two years ago this month.

As night fell Friday, the violence had largely ebbed, but several hundred protesters remained out on the streets. Eyeing them warily, a commander in the security forces said that he was worried.

“They are mobilizing,” he said. “We are afraid they might bring their weapons.”