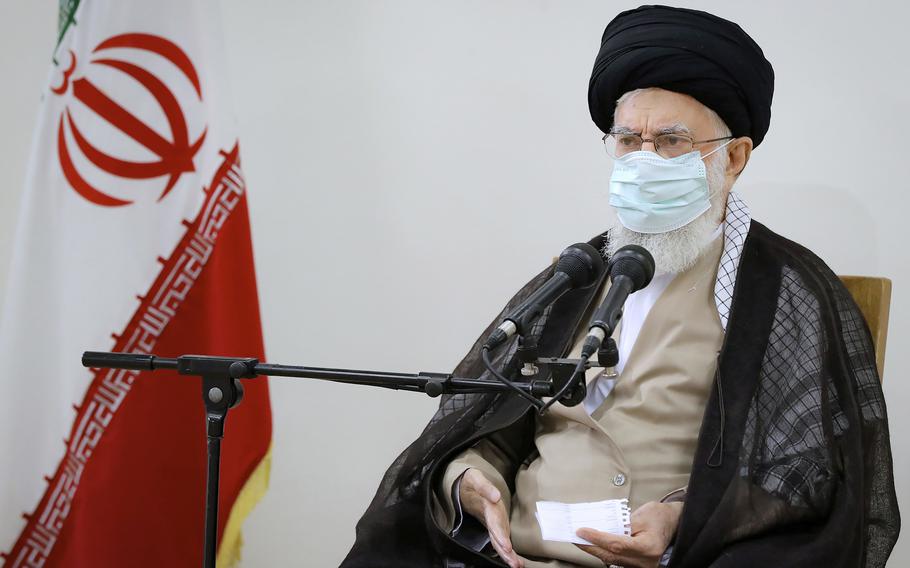 In this photo released by an official website of the office of the Iranian supreme leader, Supreme Leader Ayatollah Ali Khamenei speaks in a meeting in Tehran, Iran, Friday, July 23, 2021. Ayatollah Khamenei on Friday said he understands protesters’ anger over a drought in the country’s southwest, as a fourth death related to ongoing demonstrations there was reported. ()

International talks on the future of Iran’s nuclear program will resume on Nov. 29 in Vienna after a five-month hiatus, the Iranian government and other participants confirmed Wednesday.

The European Union, which chaired six rounds of negotiations before talks were suspended by Iran in June, announced the resumption, which was echoed in a tweet by Iranian negotiator Ali Bagheri.

The talks are aimed at a U.S. return to the 2015 agreement with Iran, also signed by Germany, Britain, France, Russia and China, under which Tehran curtailed its nuclear activities in exchange for the lifting of U.S. and international sanctions.

Former president Donald Trump withdrew from the deal in 2018 and reimposed sanctions. Since then, Iran has gradually surpassed its limits on uranium enrichment, leading to rising international concern over its nuclear capabilities and intentions.

The Biden administration, which began the negotiations in April, believes “it remains possible to quickly reach and implement an understanding on mutual return to compliance” with the deal, known as the Joint Comprehensive Plan of Action, or JCPOA, State Department spokesperson Ned Price said after the announcement.

“But it has also been clear . . . as the pause has dragged on for some time, that this window of opportunity will not be open forever, especially if Iran continues to take provocative nuclear steps,” Price said.

The three European powers act as go-betweens in the talks for the United States and Iran, which has refused to meet directly with the U.S. delegation headed by diplomat Robert Malley.

A number of questions remained unanswered by the brief announcements. The United States has insisted that the talks restart from where they left off in June, when, it has said, tentative agreements had been reached on a list of U.S. sanctions to be lifted, and on Iran’s return to the parameters of the original agreement.

But the new government in Tehran, headed by President Ebrahim Raisi, a hard line cleric, has hinted that it might not be satisfied with agreements made by its predecessor in office.

At the same time, the International Atomic Energy Agency, which verifies Iran’s compliance with the terms of the agreement, has questioned interruptions in international monitoring there. The IAEA board of governors plans to discuss the issue at a meeting held the week before the Nov. 29 meeting.

Announcement of the resumption of talks coincided with a reminder of the hair-trigger tensions that persist between Iran and the United States in the Middle East. Iran’s Islamic Revolutionary Guard Corps announced Wednesday that it had foiled a U.S. attempt to detain a tanker carrying Iranian oil in the Sea of Oman. The announcement, carried by state media channels, did not specify the date of the incident but said the tanker had been redirected to Iranian waters.

A U.S. official refuted that version of events, saying that on Oct. 24, Iran had seized a Vietnamese-flagged crude oil tanker, the Sothys, in international waters and brought it back to Iran’s territorial waters. The official said that the U.S. had approached the Sothys after Iran seized it and then backed off as it was moved toward Iranian waters.

Later Wednesday, Iran released video footage that suggested the encounter had been tense. Set to dramatic music, it showed speedboats racing toward a red tanker and commandos boarding the vessel with their guns drawn. At one point, an Iranian boat pulls up alongside a U.S. vessel, as an Iranian soldier aims a deck-mounted machine gun at the American boat.

In a separate incident, the USS Essex, an amphibious ship, was approached by multiple Iranian drones Tuesday in the Strait of Hormuz as it was carrying out helicopter flight operations, the U.S. official said.

Fahim reported from Istanbul. The Washington Post’s Dan Lamothe contributed to this report.