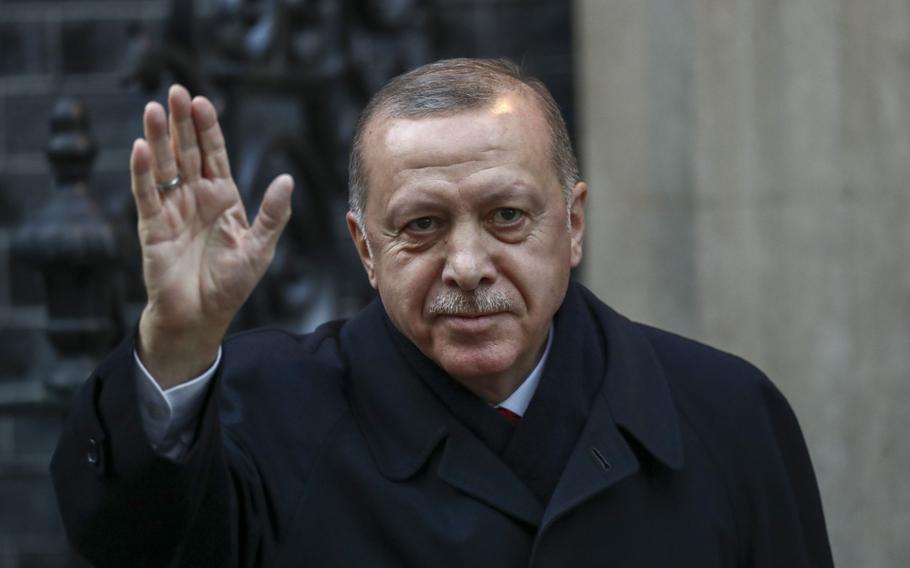 Recep Tayyip Erdogan, Turkey's president, gestures as he arrives for a multi-lateral meeting on the sidelines of the NATO summit in London, on Dec. 3, 2019. MUST CREDIT: Bloomberg photo by Simon Dawson. (Simon Dawson)

Turkey has sent more troops to northwestern Syria as it prepares for a critical meeting with the leaders of Russia and Iran next week, signaling its determination to carry on blocking an assault on one of the Syrian war's last front lines.

The government of President Recep Tayyip Erdogan has long feared that an attempt by Russian-backed Syrian forces to move on the rebel bastion of Idlib would send more refugees streaming toward the Turkish frontier.

While there's no sign of a major all-out offensive, an uptick in attacks by Russian warplanes and Syrian forces on the territory has attracted the attention of Turkish officials already facing growing domestic criticism over the cost of housing the world's biggest refugee population.

Erdogan is expected to raise the Idlib escalation when he meets Sept. 29 with Vladimir Putin and another prominent backer of the Syrian regime, Iran's President Ebrahim Raisi, according to two Turkish officials who spoke on condition of anonymity to share sensitive information.

The thousands of additional soldiers will help deter any attempted advances by Syrian ground forces on Idlib and control roads leading to the Turkish border, the officials said.

Combatant positions around Idlib have been largely static since March 2020, when Erdogan and Putin struck a truce agreement ending fierce fighting between Turkish and Syrian forces.

But Syrian President Bashar Assad is intent on claiming total victory in the country's devastating 10-year war. And in a rare Kremlin meeting with the Syrian leader last week, Putin branded the continued presence of foreign troops not authorized by the Assad government as Syria's "main problem," the latest in a series of Russian demands for Turkey, and a small U.S. force in the Kurdish-controlled east, to withdraw.

That's not about to happen. "We can't tolerate a new wave of refugees," Turkish Defense Minister Hulusi Akar said during a visit to the Syrian border on Sept. 11, a day after Islamic militants killed three Turkish soldiers in Idlib. "We must do our best to prevent migration. The basis of this lies in making the region safe and stable. We are striving for that."

Akar has refuted criticism by Russian Foreign Minister Sergei Lavrov that Turkey is failing to meet its 2018 commitments to separate radical Islamists from other opponents of Assad in Idlib.

Under a 2016 agreement, the European Union paid Turkey billions of dollars to host Syrians fleeing war and looking to settle in Europe, where migrants were convulsing politics in several states. Turkey now hosts nearly four million Syrians and as the economy faltered during the pandemic, and the Taliban takeover in Afghanistan threatened a new refugee crisis, opposition to their presence has grown.

At the United Nations General Assembly Tuesday, Erdogan addressed the issue of displaced people. "As a country that saved human dignity in the Syrian crisis, we have neither the means nor the patience to meet new immigration waves," he said.

With Turkish troops acting as a deterrent, the most Syrian forces can do is recover territory step-by-step, said Moscow-based Middle East expert Elena Suponina.

"Things haven't changed fundamentally though there could be efforts to retake some specific areas," she said.