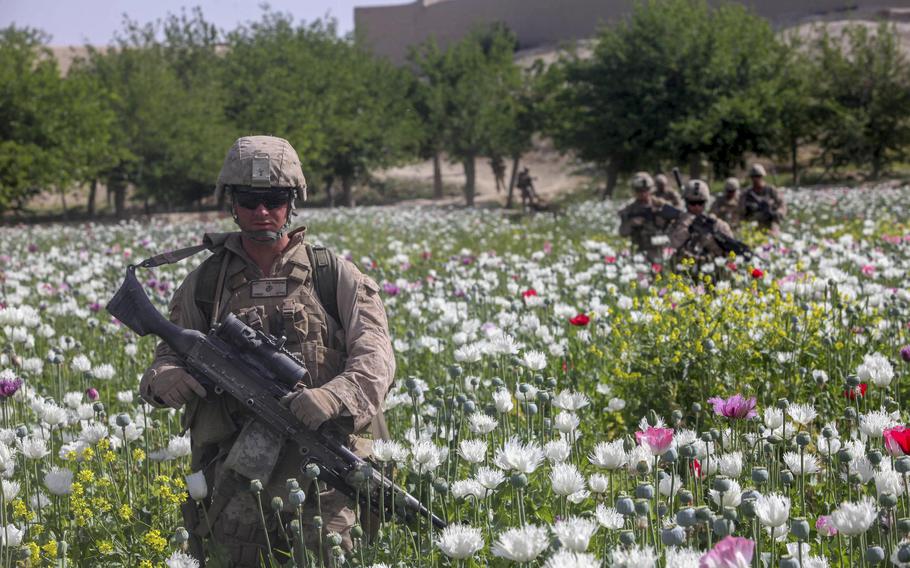 U.S. Marines patrol through a poppy field on their way to Patrol Base Mohmon in the Lui Tal district, Helmand province, Afghanistan, on April 17, 2012. (Ismael E. Ortega/U.S. Marine Corps)

The last time the Taliban took control of Afghanistan, the poppy fields flourished. In 1999, three years after the group established its Islamic Emirate of Afghanistan, the country's total production of raw opium was estimated to have hit nearly 4,600 metric tons - more than double the amount for the year before.

Almost a quarter century later, Afghanistan continues to be the world's top opium producer. But since the Taliban assumed power in Kabul earlier this month, spokesman Zabihullah Mujahid has repeatedly told international media the Taliban would not allow the production of opium or other narcotics within its state.

"Afghanistan will not be a country of cultivation of opium anymore," Mujahid said during a news conference on Aug. 17, two days after the group seized the Afghan capital.

That may not be an easy task. Afghanistan accounted for 85% of the opium produced worldwide last year, far outdoing rival producers such as Myanmar and Mexico, according to United Nations data. The country has also been accused of playing a major role in the global supply of cannabis and methamphetamines.

Despite its austere version of Islamic theology and strict enforcement of religious rules, the Taliban has long had a symbiotic relationship with the trade in opium, which can be processed chemically to produce narcotics such as heroin. In the 1990s, the group allowed the opium trade even as it banned hashish and cigarettes as haram (forbidden) for Muslims.

It was a "gymnastic" interpretation of Islamic law, said Haroun Rahimi, a legal scholar at the American University of Afghanistan. But the group needed the support of smugglers and farmers, as well as funding, which it could get by taxing opium production.

The Taliban banned opium production in 2000 under Western pressure. However, after the 2001 U.S.-led invasion of Afghanistan, production flourished again in Taliban-held areas. Despite U.S.-backed eradication efforts estimated to cost $9 billion, production peaked at an estimated 9,000 tons in 2017.

Today, the Taliban is facing a new landscape. It is no longer the isolated, inward-looking government that ruled between 1996 and 2001, nor the mostly rural insurgency that fought against the U.S.-backed Afghan government until its victory this month. It is now the de facto leader of a desperately poor nation recovering from decades of war, with significant levels of opioid addiction among its own citizens.

Robert Crews, an expert on Afghanistan at Stanford University, said the Taliban proclamation on opium was probably a "diplomatic overture."

"It is aimed at demonstrating they will form a 'responsible' government, one that adheres to international legal norms," Crews said.

The opium poppy - Papaver somniferum - is hardy. It can grow in warm and dry climates, requiring only a little irrigation. Resin from the plant can be refined into morphine, which can then be processed further into heroin; both are easily transportable, making opium an attractive crop in a country with weak infrastructure.

There is evidence of opium production in Afghanistan since at least the 18th century, scholars have said. But the industry only began to thrive after 1979, when the Soviet Union invaded, setting off a protracted period of conflict in the country that has lasted almost unbroken until the present.

Before the Taliban effectively seized power in 1996, around 59% of global opium production was estimated by the United Nations to be from the country. But production rose quickly under the Taliban's auspices, drawing international criticism.

Taliban founder Mohammad Omar banned the cultivation and trade of opium in July 2000 and received a $43 million grant in U.S. counternarcotics funding. A U.N. report released the following year suggested the policy was showing signs of success.

But the U.S.-led invasion of Afghanistan a year later upended that. As more rural areas of Afghanistan fell out of government control, poppy cultivation soared. By 2004, it had surpassed the peak of the first Taliban era and would soon go on to double it. Efforts to end the industry, backed by the United States, faltered.

In classified interviews published by The Washington Post as the Afghanistan Papers, officials admitted it wasn't just the Taliban enabling the trade.

"The biggest problem was corruption in Afghanistan, and drugs was part of it. You couldn't deal with one without dealing with the other," Douglas Wankel, a former Drug Enforcement Administration agent who led a federal counternarcotics task force in Kabul, told government interviewers.

It's difficult to say to what extent the opium trade has contributed to the Taliban's victory. Some experts argue that the funds produced by the trade, as well as Taliban control over it, are overstated. As the drugs have been largely exported abroad, the greatest profits have been made by criminal cartels outside of Afghanistan.

One study released earlier this year that estimated Taliban revenue in the opium-producing province of Nimruz found the group raised far more money there by taxing legal sectors such as transit goods and fuel than drugs - with $40.9 million in taxes levied on the former and $5.1 million on the latter in 2020.

In a sign of the shifting international drug market, the majority of revenue from the drug industry in the province was estimated to come from the production of methamphetamines, rather than opium, according to the Overseas Development Institute, the British think tank that produced the study.

David Mansfield, a British expert on Afghanistan's informal economy and one of the authors of the report, said his research showed the limits of "control" in Afghanistan. "Everything is negotiated in Afghanistan because political and military power is diffuse, even with the Taliban," he said.

Ibraheem Bahiss, an expert on Afghanistan with the International Crisis Group, said the Taliban's recent statements showed it was effectively "using narcotic eradication as a bargaining chip in return for international aid."

While the group was estimated to have made $39.9 million in revenue from taxes on the opium trade in 2018, the U.S. government has previously supplied the Afghan government with around $500 million in civilian aid each year.

Already blocked by the U.S. treasury from accessing some Afghan government funds, the Taliban is likely to need all the money it can get. So far, there has been no financial backing from the United States or other world powers. But cracking down on the opium trade would probably give the Taliban leverage with its neighbors such as Iran and Russia, the next stops on the drug route, or Europe and Canada, where it often ends up in its final form as heroin. (Most heroin in the United States comes from Mexico.)

For a group that has based much of its political legitimacy on the strict enforcement of religious law, it would also be more consistent. "Fundamentally, anything that harms the human body is haram [in Islamic law]. If something is prohibited, its consumption, dealing and trade are always prohibited," Rahimi said.

Opioid addiction has taken a toll on Afghan society. One 2015 survey concluded that there were between 2.9 million and 3.6 million drug users in Afghanistan, with opioids being the drug of choice - an exceptionally high level of per capita drug usage.

Just as the Afghan government struggled with these problems, the Taliban may now too. "In many communities, opium cultivation is crucial to survival," Crews said, adding that there could be confrontations with Afghan growers across the country who are facing economic problems because of drought and the coronavirus.

"They are harsh. They can use force," Rahimi said, of the Taliban. "But there is a limit to how much force they can use. . . . It'd be like using force against their major base of support."