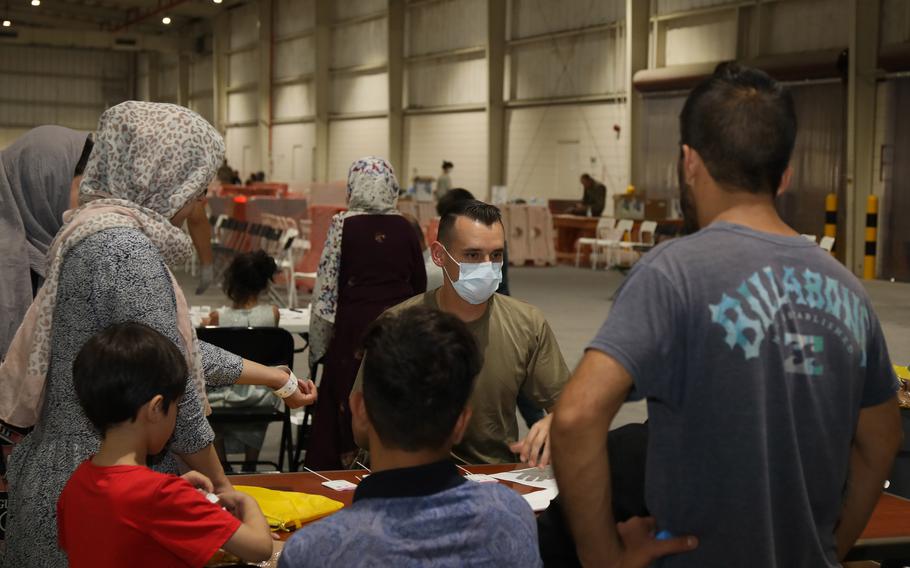 As thousands of Afghans flee the Taliban takeover, thronging the Kabul airport and huddling in camps, aid agencies are warning that the overcrowded conditions could bring a new surge in coronavirus cases. The turmoil, the United Nations said this week, has already hindered its ability to respond.

The compounding health and security crises come as the county's already struggling health care system reels under the weight of conflict, supply shortages exacerbated by the chokepoint at Kabul airport, widespread displacement and a long-standing lack of resources.

Since the Taliban seized power on Aug. 15, coronavirus testing and vaccinations have plummeted, while plans to boost oxygen supply and ICU capacity at hospitals have also been paused, according to the World Health Organization's representative in Afghanistan.

Immunizations fell 80% last week in the days following the Taliban victory, a spokesperson for UNICEF, the U.N. children's agency, said Wednesday. In the week beginning Aug. 15, just 30,500 people were vaccinated across 23 provinces - down from 134,600 people inoculated in all 34 provinces the week before, the agency said.

In an email, the spokesperson attributed the drop to people prioritizing "their safety and security first," but also warned that more than 2 million coronavirus vaccine doses now in Afghanistan are set to expire in the coming months.

Less than 5% of Afghanistan's population is fully vaccinated, the WHO said in a statement Tuesday. The agency also tracked a 77% decline in virus testing in both public and private laboratories last week compared to the week before.

According to UNICEF, 30,500 people were vaccinated in 23 provinces

"Vaccination numbers have fallen off and we're only documenting a small number of cases each day - the surveillance system to detect new cases has also declined," Rick Brennan, WHO emergency director for the Eastern Mediterranean region, which includes Afghanistan, said in an interview Tuesday.

Hundreds of thousands of people were displaced by the fighting between the Taliban and government forces in recent weeks, Brennan said.

"A lot of them have been gathering in overcrowded settings," he said. "And clearly COVID is not the big priority for most Afghans right now."

Even before the militants' lighting return to national power, however, Afghan authorities had struggled with the virus, hamstrung in part by a skeptical public and a health-care system battered by war.

Afghanistan has reported 152,000 total cases and more than 7,000 deaths since the pandemic began. But as recently as last month, only 700,000 coronavirus tests had been administered for a population of more than 40 million people, according to the U.N.'s Office for the Coordination of Humanitarian Affairs.

Thirty-five labs were open for coronavirus testing in late July, OCHA said, just as the Taliban stepped up their offensive. None of the facilities are capable of screening for new variants - but overseas testing confirmed the presence of more contagious virus variants such as alpha and delta, which has burned through unvaccinated communities everywhere from India to Israel to Russia and the United States.

Earlier this summer, in June and July, Afghanistan suffered its worst pandemic surge yet, registering record numbers of cases and deaths.

In recent weeks, infections appeared to subside but now aid workers are worried about a new spike in cases, citing a growing number of displaced people showing symptoms of COVID-19.

"We are concerned that a new spike among displaced people could lead to further transmission across cities," the WHO said. "This will place an enormous burden on the health system, which is struggling to cope with escalating trauma and emergency cases."

Now, aid agencies must navigate Taliban rule. And there are questions about whether the group will support widespread coronavirus vaccinations after openly opposing some polio immunization campaigns in the past.

"Despite the Taliban's history of disrupting public health and education efforts, the group has taken the threat of the COVID-19 pandemic seriously," Roshni Kapur, a research analyst at the Institute of South Asian Studies at the National University of Singapore, wrote in April. "It has emphasized the provision of public health services as part of a wider effort to reduce the spread of the virus and number of fatalities."

The WHO's Brennan said that his staff had "heard nothing yet that would suggest that they would stand in the way of any of our major health activities."

The biggest concern, he said, was making sure that both female health-care workers and patients were still showing up at clinics. About 40% of those vaccinated against the coronavirus are women, he said. The Taliban generally support severe restrictions for women in public life.

"What we're hearing from our monitoring on a daily basis is that there's been a bit of a fall-off in the attendance of women at the health clinics," Brennan said. It remains to be seen whether this is just a blip or if this is going to be sustained. But women's access to health care is directly relevant to our ability to control COVID well."