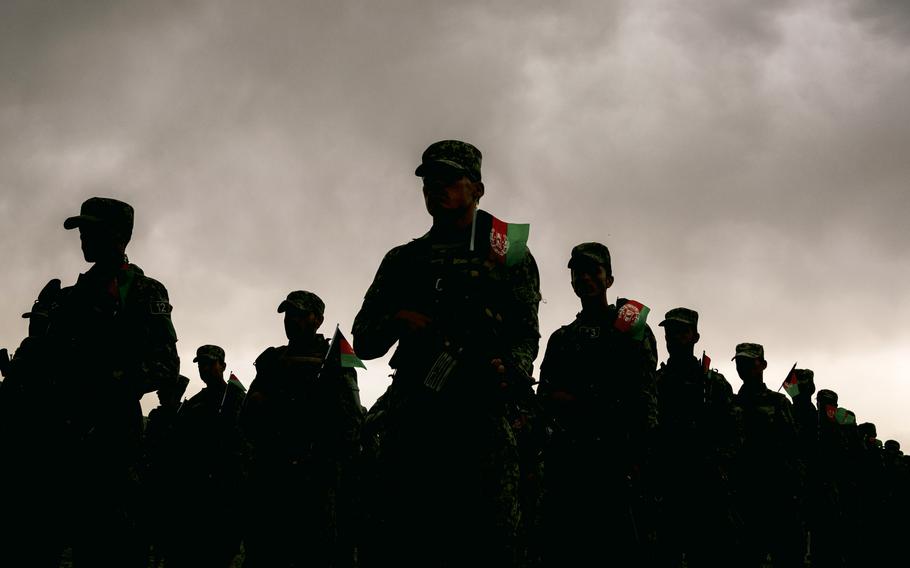 Afghan Security forces parade in a base in Kabul in April 2021. (Lorenzo Tugnoli/The Washington Post)

WASHINGTON (Tribune News Service) — The U.S. departure from Afghanistan is leaving the Pentagon with at least $6 billion in unspent funds for the now-defunct Afghan Security Force — and a potential fight over how to spend the money.

The Defense Department’s Comptroller is consulting with lawmakers and the White House Office of Management and Budget over the funds, which included $600 million in previously approved but unspent fiscal 2020 funds, as well as $2.3 billion in this fiscal year as of June plus $3.3 billion requested for fiscal 2022. They were earmarked to what was once the Afghan National Army, National Police, Air Force and Special Security Forces.

“DOD will work with the congressional defense committees to determine the most appropriate use for those funds,” Pentagon spokesman Christopher Sherwood said. One possible route would be submitting to Congress a “reprogramming” request laying out the rationale for shifting the dollars and which programs would get them.

Not that the departure from Afghanistan is cost-free: The Pentagon requested $5.6 billion for the coming fiscal year for unspecified “direct war” spending in Afghanistan. The Defense Department is evaluating whether to repurpose that money for the high costs of the massive evacuation effort now underway in Kabul.

The funds are likely to be in high demand as Republicans and some Democrats in Congress press for a bigger budget than the $715 billion that the Biden administration requested for the Defense Department for fiscal 2022. That’s 1.6% more than the $704 billion enacted for this year, but it would amount to a decrease of about 0.4% in real terms adjusted for inflation.

The House Armed Services Committee, in a new draft of its overall fiscal 2022 policy bill, cut all but $350 million of the $3.3 billion request, leaving the remainder to pay for “contract close outs and other close-out operations.”

The Afghan forces crumbled in the face of the Taliban insurgents who now rule the country, leaving moot previous plans to continue aid after the U.S. military departed. In May, a Pentagon official told the House Armed Services Committee that the department expected to continue paying salaries and supporting supplies, equipment, operations and functions of the Afghan Air Force and the Afghan Special Mission Wing.

Justifying the need for an additional $3.3 billion requested for the fiscal year starting Oct. 1, the Pentagon comptroller said that given the planned withdrawal of U.S. forces the dollars were “even more important than previously to maintain the viability of the Afghan forces and strengthening the Afghan government leverage in negotiations to end the war on terms that preserve a democratic form of government.”

The House Appropriations Committee approved $3 billion of the request. Its Senate counterpart hasn’t yet acted.

“Although the U.S. plans withdrawal by Sept. 11, there are residual costs in the fiscal 2022 budget which includes equipment” repair and restoration to return them to ready status, “in-theater support and operations/force protection,” according to a Pentagon budget document.

The U.S. withdrawal is now scheduled for Aug. 31.